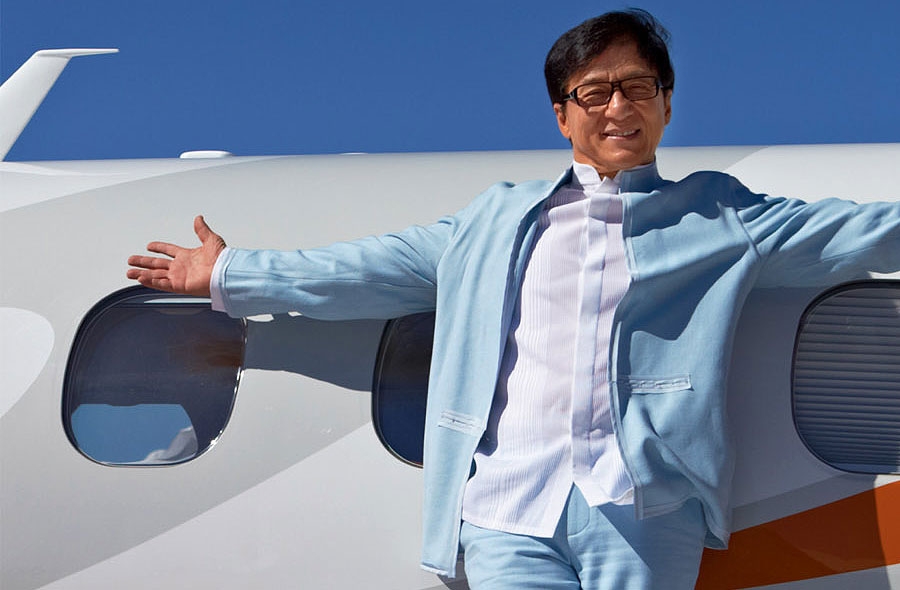 Jackie Chan on his Embraer Legacy 650.

When Jackie Chan first came to the States and observed the milieu of the American film industry, he was shocked. “So they pay you to act in the movie, but someone else does the stunts,” he thought to himself, aghast. “This can’t be.” Hollywood in the Eighties was a stark contrast from the Hong Kong movie scene that birthed Jackie Chan. Over there, men would line up every day for the opportunity to risk their lives — free from the solace of harnesses or safety nets — for a few measly dollars and a shot at superstardom. So he brushed the stuntman aside, and did all his own stunts, just as he had done in China. “This is my film,” he thought, “these will be my stunts.”

The most famous living person in the most populous country on earth, Jackie Chan has been sacrificing his body since the early Sixties, performing all of his own stunts in over 150 films. He holds the Guinness World Record for “Most Stunts by a Living Actor,” and over the years has broken his nose, skull, fingers, toes, hips, neck, ribs, sternum, ankles and countless other bones in his body. He has always taken pride in (literally) scaling the highest heights and routinely risking death for an audience’s enjoyment. But at age sixty, all of that death defying has taken a brutal toll on his body.

Today, Chan is more focused on giving back to the world and improving the quality of life in his homeland. An active philanthropist for decades, he founded the Jackie Chan Charitable Foundation in 1988. The organization provides disaster relief as well as aid and scholarships to misguided youths in Hong Kong. In 2005, Chan founded a second organization, the Dragon’s Heart Foundation, to provide children and the elderly in remote, desolate areas of China with new schools, books, and clothing. Chan personally donated over $1.5 million to help those devastated by the 2008 Sichuan earthquake, and has pledged to give half of his fortune to charity when he dies.

He is also a Unicef Goodwill Ambassador who has partnered with WildAid since the mid-Nineties. He carries the latter’s documentary with him wherever he goes, sharing it with as many people as he can. “I show them,” he says, “’look, this is how they kill the elephants’ . . . slowly, they learn to believe the right message.” Chan regularly shoots commercials for the organization; he filmed one last winter with a rhino he describes as “magnificent.” He wells up with passion when describing the need to preserve these creatures. “I want my grandchildren to be able to see animals like that in the wild,” he says. He used to risk his life for our entertainment, but today he most admires the activists “on the ground who risk their lives” for a cause.

It might seem difficult to fathom today, but there was once a time when the notion that Jackie Chan Kong-sang would become a global icon — one who could unite, entertain, and edify Eastern and Western cultures — seemed utterly unimaginable. An energetic and somewhat spastic child, Chan earned the nickname “Pao-pao,” or “Cannonball,” for his seemingly boundless energy growing up. His parents were refugees of the Chinese Civil War who worked for the French ambassador in Hong Kong, and Chan spent his formative years bounding around the French consulate.

When he was six years old, Chan’s father sent him to the China Drama Academy. He had already failed out of primary school, and the move was somewhat of a last-ditch attempt to straighten young Jackie out. Surprisingly, he thrived at a school that could harness his energy and nourish his talent. Chan spent the decade rigorously training, ardently devoting himself to martial arts and acrobatics. He shined brightest when performing — in a school performance group and in several films as a child. Chan showcased a raw, infectious charisma, and felt a strong sense of joy witnessing the efficacy of his performances.

As he entered adulthood, he earned a black belt in hapkido, and strived to break into the film industry. Like countless others inspired by the flourishing kung fu film industry of the Seventies, Chan took whatever jobs he could find, working as an extra or a stuntman to make ends meet. It was stunt work that brought him close to one of his idols, Bruce Lee, in the early part of the decade. Chan worked as a stuntman on the seminal martial arts classics Fist of Fury and Enter the Dragon, where he got to observe Lee’s mastery firsthand. When Lee exploded in the States, it proved that it was possible for an Asian actor to achieve superstar status beyond Asia. If Lee could cross over, he could, too, Chan thought. But he was going to do it his own way.

Chan would fashion an onscreen persona antithetical to Lee’s. Whereas Lee portrayed rigid, righteous characters whose heroism was immediately evident, Chan carved his legacy playing lovable goofballs who were forced into action and somehow ultimately prevailed against the odds. If Lee was James Bond, Chan was Inspector Clouseau. Chan brought humor to kung fu; his movements and protagonists owe as much to Buster Keaton and Charlie Chaplin as Bruce Lee and Sonny Chiba.

In perhaps no other film is Chan’s unique poetry more evident than in 1994’s Drunken Master II. The film is available in original Cantonese or dubbed in that cheesy karate voice, but you needn’t be able to understand the dialogue to know why Time named it as one of the “100 Greatest Films of All Time.” In the film, Chan portrays the eponymous sot whose fighting prowess grows in accordance with his BAC. Every battle is an astonishingly-balletic and hilarious testament to Chan’s genius as a choreographer, martial artist, and, above all else, an entertainer.

For over two decades, franchises like Drunken Master and Police Story made Chan an icon in Asia, yet his first attempt at crossing over in the Eighties faltered. But after a string of profitable, dubbed films in the mid-nineties, Chan was vindicated in 1998 with Rush Hour. The film introduced mainstream audiences to his brilliant and unique brand of comedic martial arts poetry, and in the process, catapulted the careers of his co-star and director (Chris Tucker and Brett Ratner, respectively). Rush Hour reinvigorated the then-stale buddy cop genre of the Eighties, and Chan become the first Asian star to gain superstardom in the U.S. since his idol, Lee, twenty years prior.

Over the next two decades, Rush Hour was followed by two profitable sequels and myriad other hits like Shanghai Noon and The Karate Kid. But as Chan grew older and more successful, film took more of a back seat to his charitable efforts. Today he is deeply committed to seeing a more free, open ,and prosperous China, not just by building schools and improving infrastructure, but by changing attitudes. Lately, Chan has been leading a concerted effort to convince his countrymen to stop buying ivory, rhino horn, and other goods derived from endangered species. But when describing the task of rehabilitating ancient attitudes he warns, “We have 1.4 billion people — it takes time.”

Chan’s philanthropic endeavors ensure that he is constantly traveling, and as Jetset was among the first to report earlier this year, he does so on an Embraer Legacy 650. Chan is the first in China to own the futuristic jet and this May he will fly it to Shanghai for the opening of the Jackie Chan Museum. The museum will serve as a monument to a man who has done so much to entertain and enrich his homeland. “I see so many action stars all those years come and go…action stars cannot live too long,” he says. But through his work — through his actions more so than his action films — Jackie Chan has cultivated a legacy destined to live forever. 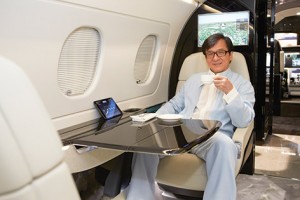 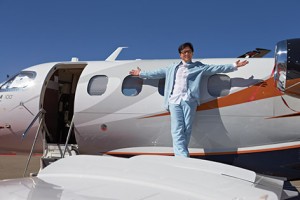 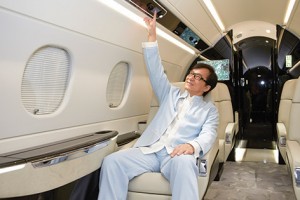 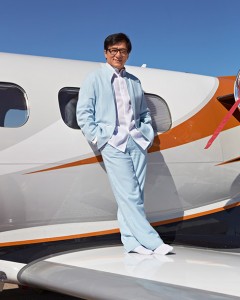