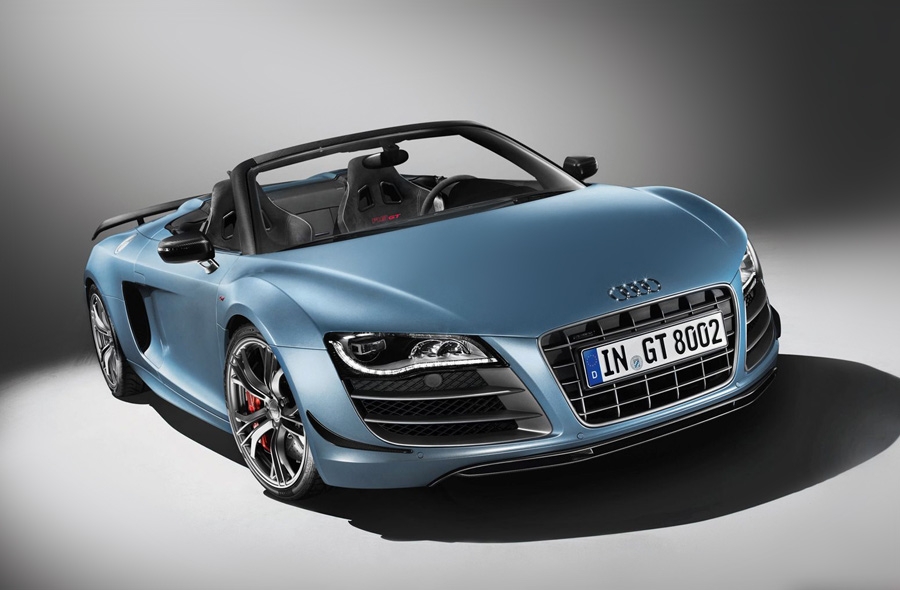 A few days before the 24 Hours of Le Mans, the German manufacturer unveiled the new Audi R8 GT Spyder, a car so fast that it could have competed in the race itself.

Even lighter, even more powerful, even more captivating; The Audi R8 GT Spyder delivers breathtaking performance. The open-top flagship version of the high-performance sports car develops 560 hp and – thanks to Audi ultra – has trimmed a full 187 pounds from an already low weight. The R8 GT Spyder accelerates from zero to 62 mph in 3.8 seconds and reaches a top speed of 196.97 mph.

One year ago, Audi unveiled the R8 GT spyder in coupe form as the new flagship model of the R8 model line. It wasn’t long before all 333 units in the limited series were sold out. Now the open-top version of the high-performance sports car is being launched with production again capped at 333 units. Each car sports a tag with its individual number on the gear lever knob.

The Audi ultra lightweight technology is the key to the R8 GT Spyder’s weight of just 3,616 pounds. The Audi Space Frame (ASF) body, consisting of cast nodes, extruded sections and aluminum panels, accounts for just 472 pounds of the total weight. The body is assembled predominantly by hand in the R8 workshop at the Neckarsulm plant, and final assembly of the car takes place in the same way.

The engine frame is made of ultra-light magnesium; the long cover over the soft-top compartment and the large side panels at the rear are made of carbon fiber-reinforced polymer (CFRP). That same lightweight material is also used for the modified front spoiler, the fixed rear spoiler and the new rear bumper.

Visual modifications accentuate the styling of the R8 GT Spyder. These include add-on parts in contrasting titanium gray, a front splitter with a dual lip, flics at the sides of the front bumper, red GT badges, round exhaust tailpipes, an enlarged diffuser and dark LED tail lights in a clear-glass design. Audi offers an optional windshield frame in matte CFRP. In classic Audi fashion, the Audi R8 GT Spyder features a lightweight fabric soft top that is extremely quiet and fully suitable for highway cruising. Its electro hydraulic drive brings it up or down in 19 seconds, even at speeds up to 31 mph. The extendable glass rear window is nestled in the bulkhead, separate from the soft top. Integrated in the bulkhead is a rollover protection system comprised of two pretensioned plates.

The performance offered by the new top-of-the-line model in the R8 family is formidable. The 5.2-liter V10 with an aluminum crankcase draws its fuel from an FSI direct injection system. Dry-sump lubrication ensures a reliable supply of oil even under maximum lateral or straight-line acceleration. With its modified electronic management, the long-stroke engine produces 398.28 foot/pounds of torque at 6,500 rpm, and its peak output is 560 hp). Each unit of horsepower has only 6.46 pounds to move.

In every situation, the engine impresses with its thrust and bite – and that unmistakable sound of an Audi ten-cylinder. The Audi R8 GT Spyder comes standard with an automated six-speed R tronic transmission with two fully automatic modes.

The quattro permanent all-wheel drive has a strong rear-wheel bias, granted by the axle load distribution. If the situation calls for it, the system sends additional torque to the front axle. In tandem with the limited slip differential at the rear, it provides an added measure of traction, stability and cornering speed, giving it a strong lead over the rear-wheel-drive competition.

Great attention to detail is evident in the materials and workmanship inside the car. The salient aspect of the controls is their logically structured design. The open two-seater offers a roomy interior, and its front end can accommodate up to 3.5 cubic feet of cargo. The rear bulkhead houses three storage compartments. The interior is black and can be adorned with stitching in a choice of titanium gray or crimson for added refinement. Alcantara upholstery comes standard, even on the sport steering wheel and windshield frame. Audi also offers leather in Fine Nappa quality. Numerous details – including white dials and R8 GT logos – provide classy accents. The distinctive R8 “monoposto,” a large arch encircling the driver’s cockpit, is made of matte CFRP. Audi ultra requires no sacrifice on the part of R8 GT Spyder owners, as they also offer a sophisticated sound system from Bang & Olufsen and a Bluetooth interface including a seatbelt microphone for carrying on a phone conversation conveniently. Options specific to the Audi R8 GT Spyder include bucket seats with a carbon-fiber composite chassis, matte CFRP applications and embroidered logos on the seat upholstery. 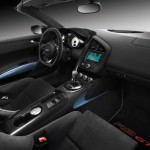 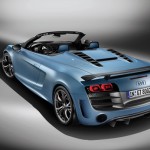 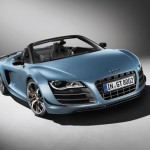