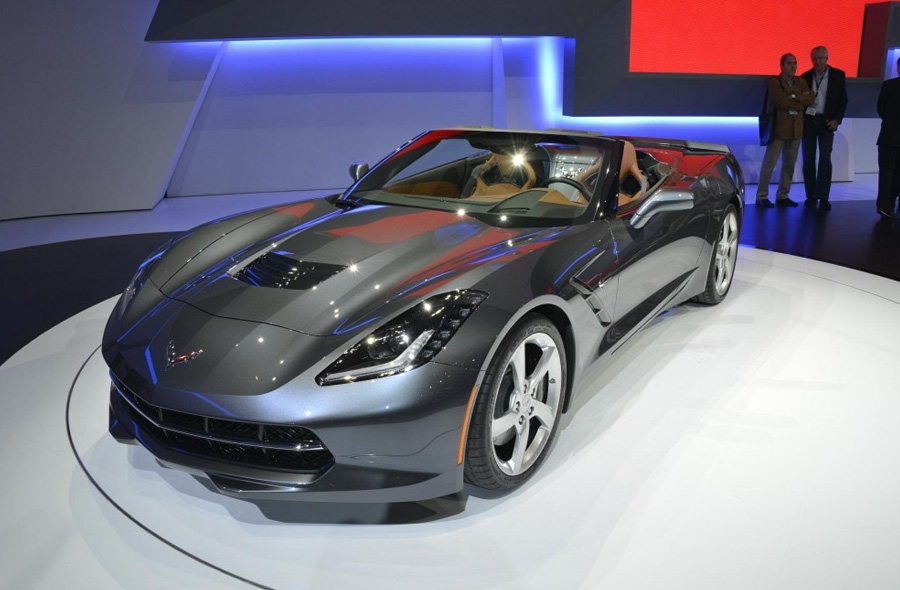 The media days of the 83rd Geneva International Motor Show drew 10,000 journalists to view the latest models from the auto industry’s leading manufacturers.

Some of the most desirable automobiles were unveiled this year. Such cars as the Lamborghini Veneno with a price tag of $3.9 million, the new Chevrolet Corvette Stingray convertible, the brand new Aston Martin Rapide S Coupe, as well as the outstanding brand new Rolls Royce Wraith were decked out for display.

The show also revealed the slick looking McLaren P1 and the Ferrari LaFerrari, part of a new generation of supercar hybrids, but featuring gas engines and electric motors with maximum speeds over 200 mph. First held in 1905, the show is regarded as a level playing field for the world’s automakers, aided by the fact that Switzerland lacks an auto industry of its own. The 2013 edition presented more than 130 world and European premieres and welcomed over 750,000 visitors.

A FEW OF THE SHOW’S HIGHLIGHTS: 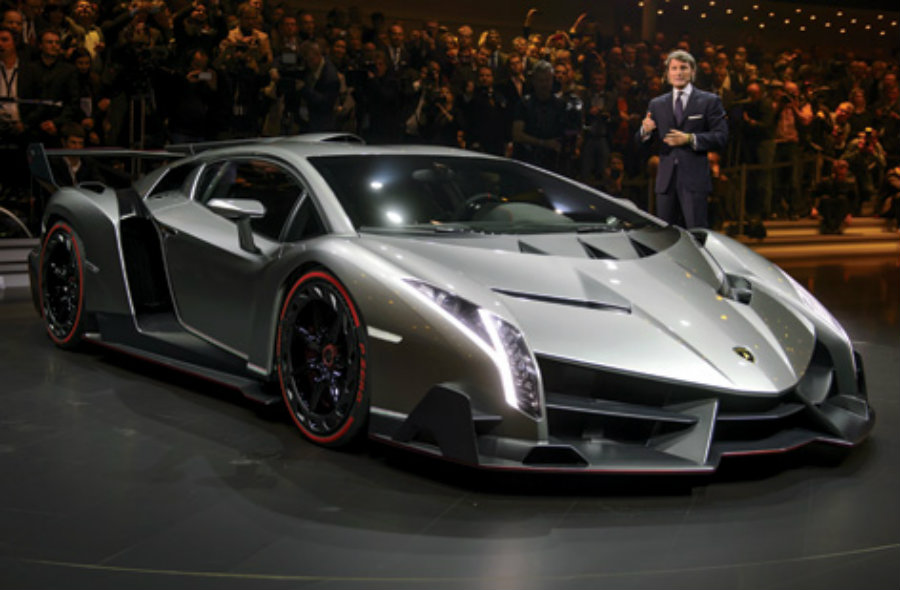 Lamborghini celebrated its 50th anniversary in pretty remarkable style with the unveiling of its Veneno supercar. The Veneno name comes from a notorious fighting bull that killed a matador back in 1914 and is meant to echo the car’s aggressive nature. Boasting numbers of 750 horsepower and a top speed of 220 mph, “aggressive” might even be an understatement. Lamborghini is only building four of these supercars at $3.9 million a pop. Unfortunately, even if you do sport the bankroll for one, Lamborghini has said that each of the cars has already found a home. Three are sold, and Lamborghini is keeping one for itself. 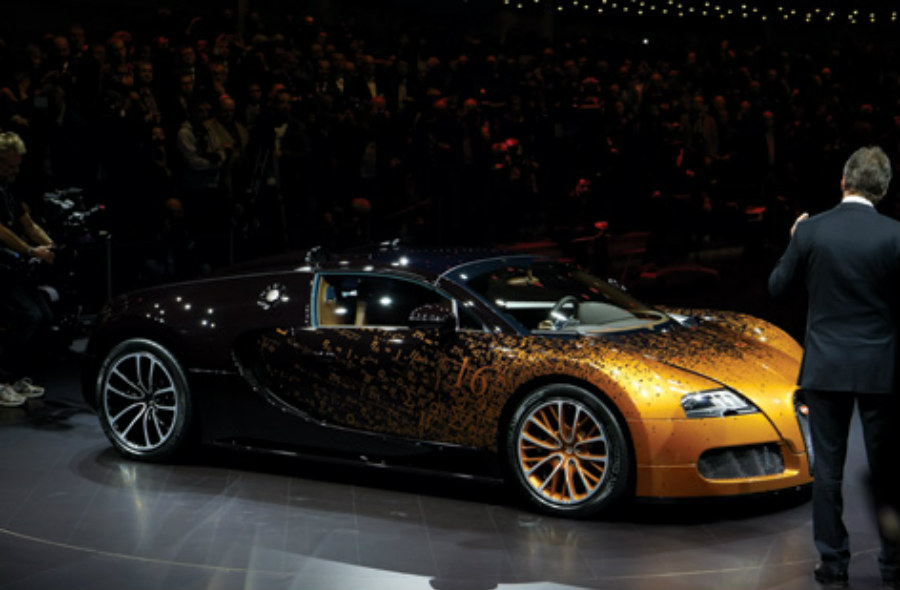 Bugatti presented in Geneva the Veyron Grand Sport Venet special edition developed in collaboration with French artist Bernard Venet. Described as the “fastest artwork ever,” this custom Grand Sport features a lot of mathematic and scientific formulas which were used during development running along the supercar’s front fascia and over its flanks. A similar theme has been applied for the cabin, with a rusted appearance for the dashboard panels and leather trim. No mechanical changes were made, as the vehicle has the same 8.0-liter W16 turbocharged engine outputting 1,001 hp which is enough for a top speed of 252 mph. 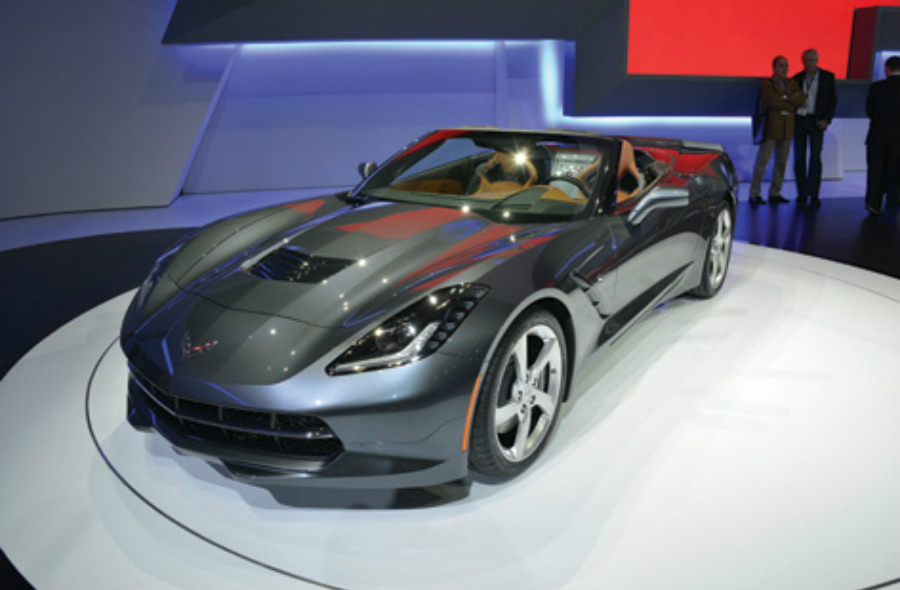 With an eye toward expanding the global reach of its 2014 Corvette Stingray, Chevrolet introduced a convertible version of the sports car in Geneva. The drop-top version of the Stingray boasts the same 6.2-liter V-8 as the coupe that was introduced at January’s Detroit Auto Show. The Corvette 450 horsepower convertible will be offered with either a six-speed automatic transmission with paddle shifters, or a seven-speed manual transmission with automatic rev-matching. Aesthetically, the convertible differs only slightly from its coupe counterpart. Excluding the obvious change to the car’s roofline, only the coupe’s air intakes above the rear wheel are missing on the convertible. The coupe and convertible versions will go on sale in late 2013. 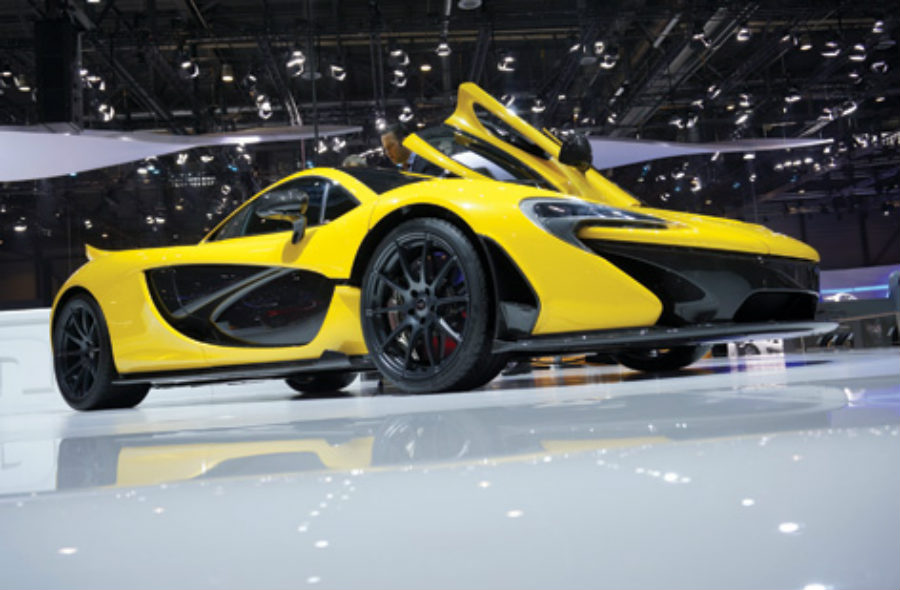 Sculpted from carbon fiber, in a glittery racing yellow set off by hash-marked slate gray, the McLaren P1 cuts a racetrack figure while boasting superior – for its class – emissions under 200 grams per kilometer. That compares with over 300 grams/kilometer for a super car without hybrid. The hybrid technology has performance advantages because the electric engine fills in the gap before the turbo engine kicks in. It’s a tiny effect, but everything counts in supercars. The P1 can do 0-180 mph in under 17 seconds. It sells for $1.3 million, with just 375 in the series. 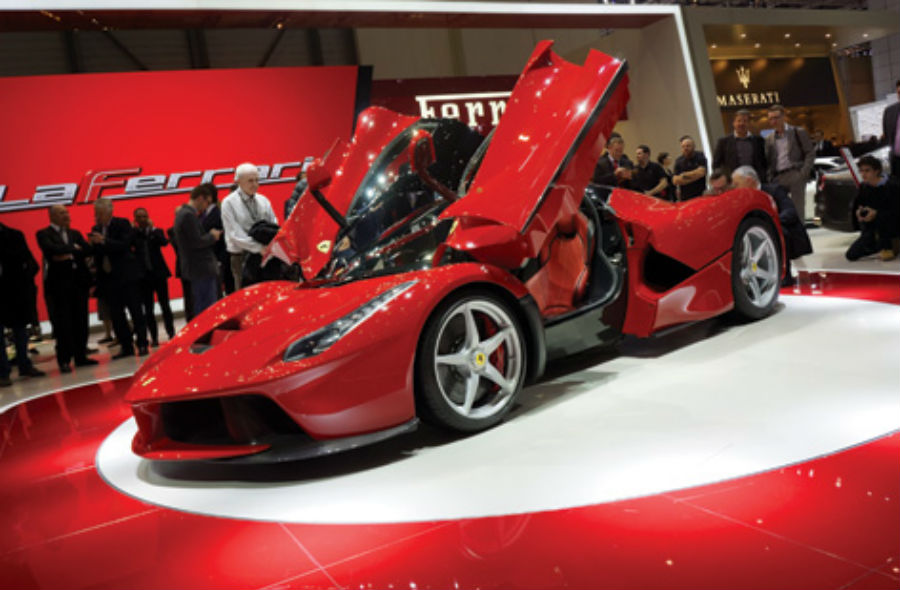 LaFerrari is the name of the new special edition Ferrari, meant to be the definitive. “Owners say they have a Ferrari,” Chairman Luca di Montezemolo says. “This is The Ferrari.” The electric engine has a performance appeal that is proving a draw to Ferrari owners. Only 499 of the models will be built –– and some 700 people, many of them Ferrari owners already, have registered interest meaning a tough selection process. It has a top speed in excess of 217.4 mph with a price tag of $1.3 million. 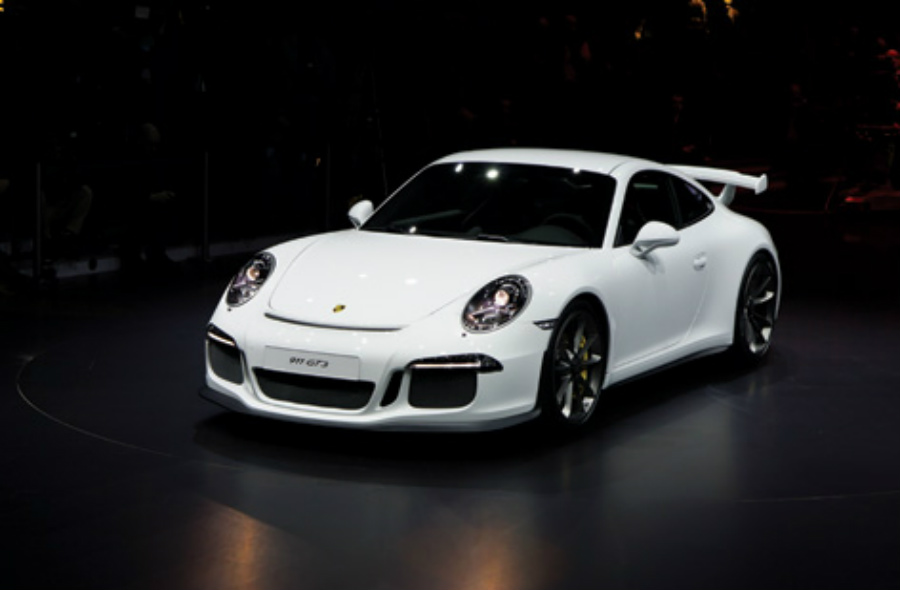 The GT3 is the most powerful 911 variant Porsche makes that doesn’t have the benefits of turbocharging. The 2014 GT3 will wring 475 horsepower from a 3.8-liter six-cylinder engine, a top speed of 195 mph and will do zero to 60 mph in 3.3 seconds. Although the engine in this fifth-generation GT3 is based on the one in the Carrera S, the two share “only a few common parts.” Helping the GT3’s agility is a new rear-wheel-steer system, a first for any production Porsche. This system will turn the wheels in the same or the opposite direction of the front wheels, depending on the car’s speed. The $131,350 GT3 will go on sale in the U.S. toward the end of 2013. 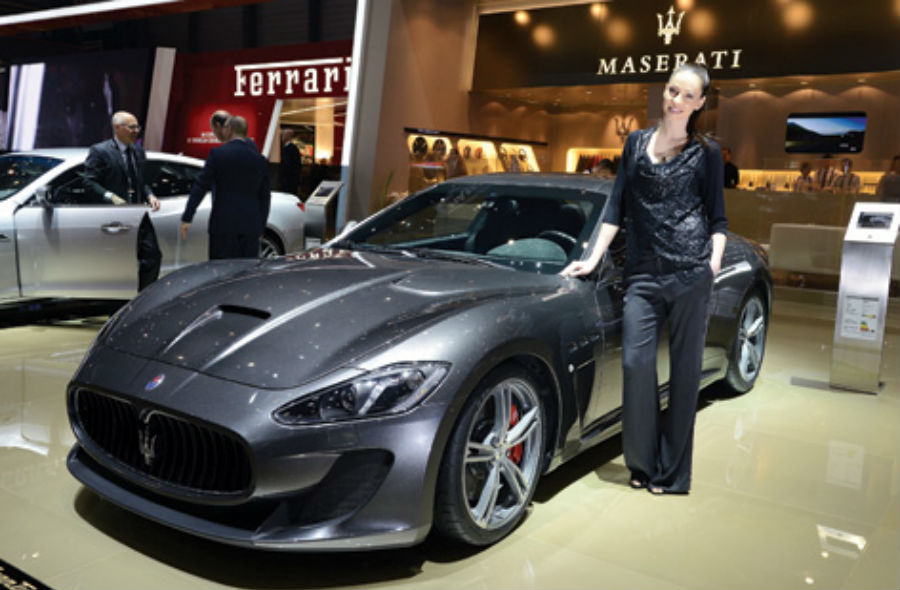 Maserati unveiled its new four-seater GranTurismo MC Stradale vehicle – the optimum expression of sportiness combined with the luxury of a coupe made in Modena. As with the previous two-seater version, the new four- seater version of the GranTurismo MC Stradale takes its inspiration from the racing version which competes in the Maserati Trofeo Championship. The new GranTurismo MC Stradale model offers the perfect combination of sportiness, luxury and elegance, comfort and style, functionality and dynamism that can be enjoyed by four people. Powered by a 4.7 liter, 460 hp aspirated V8 engine, combined with an MC Race Shift six-speed electro actuated gearbox, the car ensures outstanding performance, managing a top speed of 188 mph and blasting to 62 mph, from a standstill, in just 4.5 seconds. 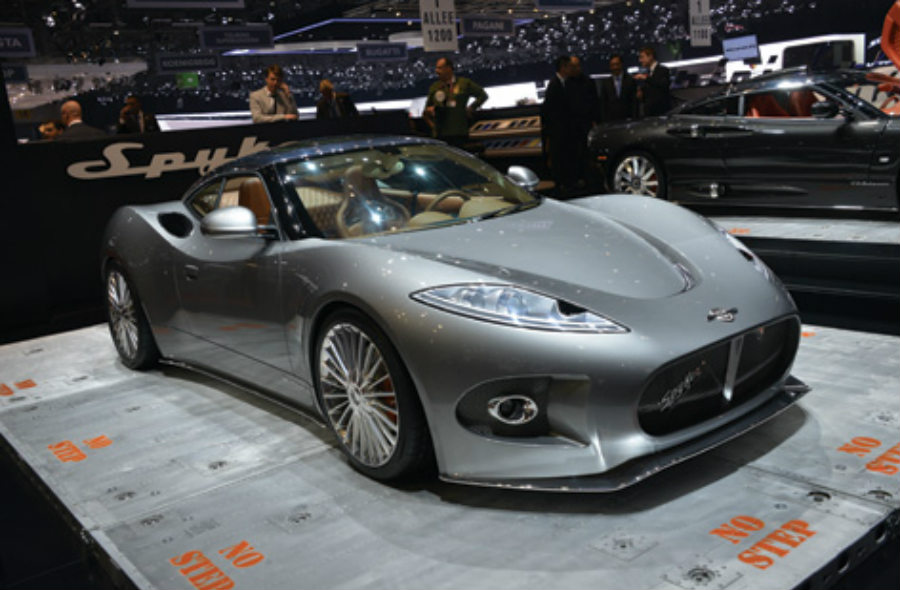 Dutch automaker Spyker introduced the B6 Venator concept in Geneva. While the show car is touted as a concept, the production model will be built starting in early 2014. The B6 Venator strongly harkens back to Spyker’s aviation heritage. The exterior includes the automaker’s propeller logo, as well as an “aerodynamically-shaped glass aircraft canopy.” Spyker says the 3D LED rear lights are similar to the iris-type afterburners of a jet engine found on modern fighter aircraft. The rear-wheel drive B6 Venator manages a slight 1,400 kg curb weight thanks to an all-carbon fiber body and all-aluminum platform. The rear mid-positioned and transverse-mounted V6, meanwhile, is mated to a six-speed automatic transmission, producing at least 375 bhp. 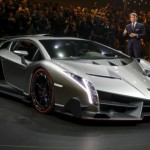 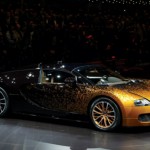 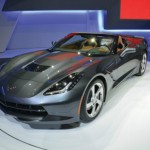 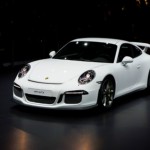 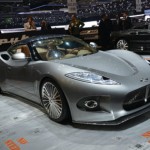 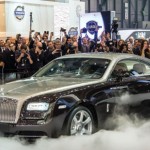