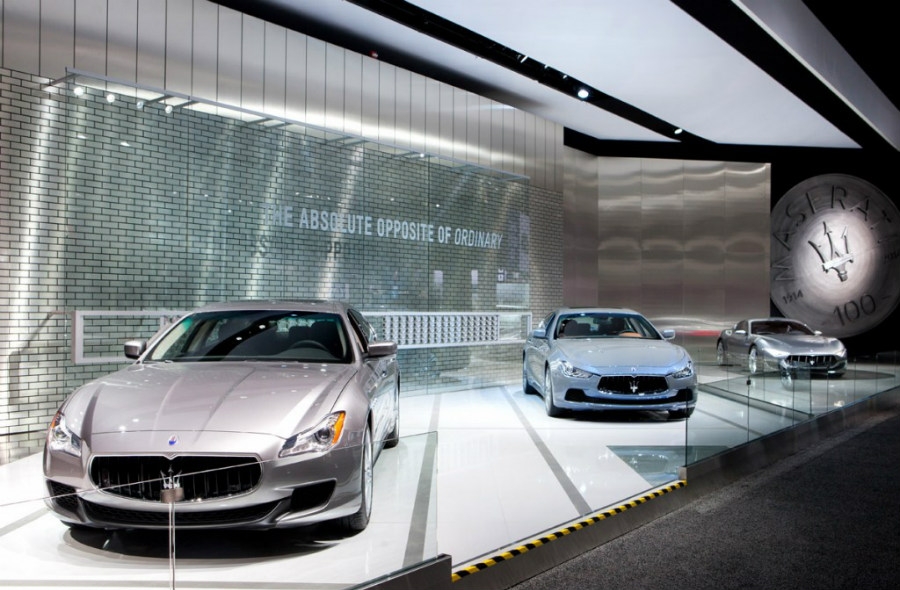 The Ermenegildo Zegna and Maserati collaboration is an extension of a partnership between these two Italian powerhouses which previously created the Quattroporte Zegna Limited Edition, which was limited to 100 examples worldwide. The newly-debuted Ghibli Ermenegildo Zegna Edition concept is based on the S Q4 version of the Ghibli and provides a first glimpse at Maserati’s possible future product line-up.

Beginning with a new exterior color, Azzurro Astro, a sinuous and specially fashioned exclusively with Zegna, the concept is a scene stealer. This special trimmed Ghibli S Q4 enhances its character to create the ultimate contemporary look. The interior features Zegna-inspired materials and trims with special contrast color combinations of the finest Italian leather and 100% Italian natural fabrics. The result is a bold and contemporary product fashioned for the detail-oriented enthusiast and tailored for connoisseurs of luxury. It pays tribute to the harmony of opposites, a stylistic synthesis between sophisticated design and technological dynamism.

The new, exclusive exterior Azzurro Astro color (triple layer of pigment) volume, shine and iridescence to the finish, which is enhanced by iridescent highlights blue and ash grey. The aluminum pigments used for this special color magnify the vehicle’s exterior lines and bring out the muscular profile of its bodywork. The car’s sculpted outline is enhanced by the color used, while the transparent top coat adds another layer of depth and high gloss shine. The exterior is further distinguished by 20” Urano design high-polished alloy wheels, with a distinctive color that was carefully conceived for this concept car named Liquid Metal. The futuristic wheel design emphasizes its sporty style, high tech appeal and luxury finishes.

The shared experience with the Quattroporte Zegna Limited Edition helped Ermenegildo Zegna create a pure silk fabric that combines its quintessential soft feel with an elegant yet technical look. The passenger compartment is dressed in leather tones and Zegna anthracite silk. The natural color leather of POLTRONA FRAU is matched with Ermenegildo Zegna’s micro-chevron silk weave. Silk, an inherently sophisticated material, is further embellished by the hand-stitched macro-chevron pattern and finished off by the seat piping. The door panels also feature matching salt and pepper silk jersey and rib embroidery. The seat cushions feature extra fine grain, natural color leather with contrast light grey stitching, which matches a silk insert with a micro-chevron weave on the central seat and backrest area, also with a special macro-chevron weave.

On the door panels, the center panel is covered with Zegna silk Jersey and embellished with a diagonal roll pattern, quite unique for the interior of a vehicle. The same fabric is used to cover the car’s roof lining, top pillars and sun shades, carrying “Ermenegildo Zegna Exclusively for Maserati” brand labels. Other sophisticated and beautifully appointed luxurious finishes include the signature Trident emblem with contrast stitching on the headrests. The sophisticated, luxury finish of the car interior is also expressed by the headrests, featuring an embroidered Trident emblem and contrasting stitching. Glossy and decorative carbon fiber inserts are applied to the massive central tunnel and door panels.

Other added touches include black mat covers with special leather inserts with the Ghibli name embroidered. These are finished off by a natural color leather edge and fixed to the car floor with buttons machined from billet aluminum. The door sill plates are also crafted of billet aluminum and satin-finished with a glossy carbon fiber insert, marked by the Maserati trident logo. For the final touch, an Ermenegildo Zegna Edition plate is applied to the central pillar and tunnel between the two front seats.

The car is powered by the high-performance 410 HP V6 Twin-Turbo engine, with “Q4” all-wheel drive system, ensuring 0 to 60 mph acceleration in just 4.7 seconds, thanks to 406 ft-lbs of torque and fully capable of reaching a top speed of 175 mph. 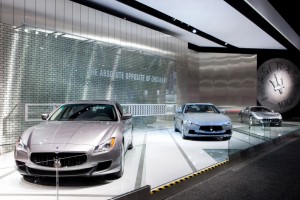 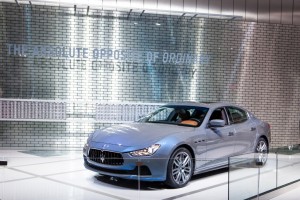