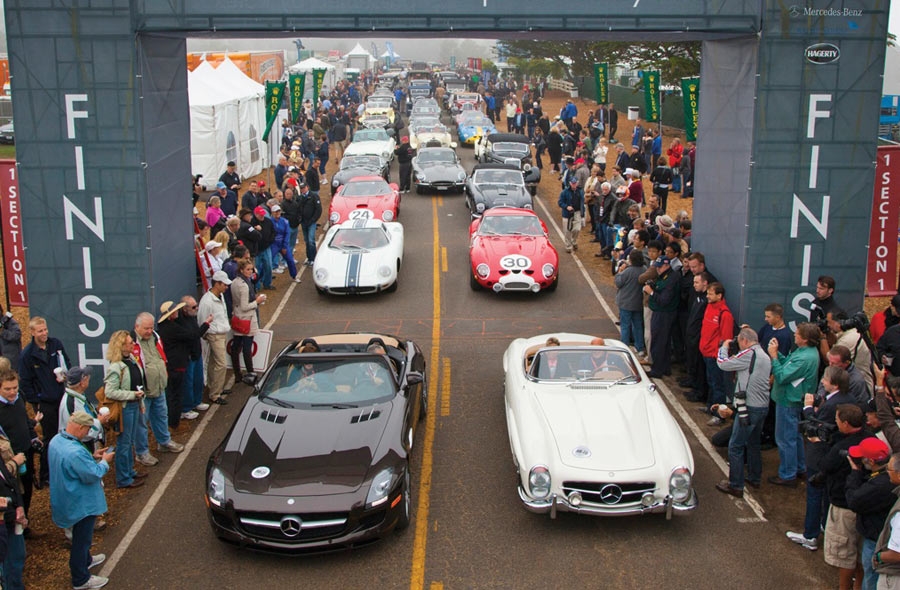 The Pebble Beach Concours d’Elegance has come and gone, and as expected, delivered a spectacular lineup of classic cars, celebrity sightings and luxury concept debuts throughout the Monterey Peninsula.

The wealthy million-plus visitors are back home now and already dreaming of coming back next year to celebrate the greatest automobile event of the year, also known as The Monterey Classic Car Week. But the Concours is only the final event in a packed week celebrating the classic automobile. All over Monterey County, classic cars take to the streets, golf courses, parks and the world-renowned Mazda Raceway Laguna Seca, surrounding visitors with automobiles from yesteryear.

For one week each August, connoisseurs, and enthusiasts from around the world converge on the Monterey Peninsula to celebrate the ultimate in automotive design, engineering, and camaraderie among fellow aficionados. This year, one of the first events to kick off the week was again the Pebble Beach Tour d’Elegance presented by Rolex. This annual driving event delights entrants and spectators alike. This year saw more than 150 historic automobiles from 13 different countries. Initiated to showcase the elegance of the automobile in motion, the Tour also underscores the early history of the place that is Pebble Beach. Decades before golf links were laid out along the edge of the Pacific Ocean, this area was known for its scenic drive, winding for miles through the pine and cypress forest, dancing alongside dramatic cliffs and leading, ultimately, to a beautiful crescent-shaped bay. The traditional Tour traces portions of the original 17-Mile Drive, traverses nearby mountains and valleys, dips down famed Highway One and pauses for a time in charming Carmel-by-the-Sea.

The crown jewel in a whirlwind of events is The Quail, A Motorsports Gathering. Since its inception, it has combined a lush setting in a golf course nestled against the Santa Lucia mountain range with exceptional cuisine and the finest examples of vintage sporting automobiles seen during the week. The event’s worldwide reputation is confirmed by its inclusion in the Louis Vuitton Classic Concours Award, a competition where the luxury goods maker chooses one car each year from the Best of Show winners at The Quail, the Pebble Beach Concours d’Elegance, the Amelia Island Concours d’Elegance, the Cavallino Classic and the Concorso D’Eleganza Villa d’Este. The 2011 Quail celebrated Phil Hill’s 50th Anniversary Formula One World Drivers’ Championship and the Jaguar’s E-Type 50th Anniversary.

In addition to Concours D’Elegance, manufacturer concept car displays and driving events, the luxury classic car auctions are some of the most anticipated events of the Monterey Classic Car Week. Gooding & Company and RM Auctions are two of the most well-known events that draw ultra-rich car aficionados from around the world. A curvy red 1957 Ferrari became the most expensive car sold at auction, fetching $16.4 million at Gooding & Co. and topping a weekend of sales in which autos outshone equities. Gooding is recognized the world over as a leading exotic and rare car auction house specializing in the finest antique, classic, sports and racing cars. The Ferrari 250 Testa Rossa prototype, which competed in the Le Mans 24-hour race, was on the block with hundreds of other collectible autos. Despite the recent stock market turmoil, buyers competed aggressively for trophy autos, establishing records for cars and auction houses. Sales at RM Auctions totaled about $80 million, topping its previous high of $67 million last year.

The Rolex Monterey Motorsports Reunion has earned its stripes as the premier historic automobile racing event in the U.S., and motorsports enthusiasts from around the world have taken notice. They come not only by the tens of thousands to watch the sentimental past of car racing come roaring back to life but also by the hundreds to personally strap into the driver’s seat and test the legendary turns and challenging elevation changes of Laguna Seca. This year’s 550 perfectly maintained “time capsules on wheels” fell smartly into 17 Rolex Race Groups whose drivers, representing 14 countries, qualified on Friday for their start order on either Saturday or Sunday. And while all group winners were proud at the end of their designated race days, none was more emotional than Terry Larson from Mesa, Ariz., who was deemed worthy of the overall Rolex Award of Excellence, presented at Sunday’s awards ceremony to the driver who excels in the spirit of the weekend.

Once known as the Pebble Beach Road Races, the Concours show began as an addition to local road racing, which then became too dangerous in the late ’50s as the cars became bigger and faster. The fact that the cars brought together at Pebble Beach are “drivers,” and are all still running, helps set this car show apart from the many others taking place around the globe. The Concours judges automobiles and motorcycles for their historical accuracy, technical merit, style and elegance, with the aim to recognize and encourage proper preservation of the world’s great automobiles.

Since its beginnings, the Pebble Beach Concours D’Elegance has grown into one of the most competitive collector car shows in the automotive world. The coveted “Best of Show” Award is presented at the end of the day to great fanfare, with all class winners eligible for Concours’ most talked-about prize. This year’s “Best of Show” award went to a 1934 Voisin C-25 Aerodyne, owned by Peter and Merle Mullin of Los Angeles. As fireworks lit up the stage and confetti rained down, the grand prize winners drove across the ramp to the flashes of thousands of cameras trying to capture the moment.

As the Monterey Classic Car Week came to a close, one is reminded of the true endurance story of the automobile and those who can testify to the automotive world’s rich history. The 2012 edition of the Pebble Beach Concours D’Elegance will take place on Sunday, August 19—be sure to save the date. 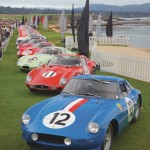 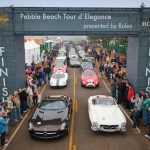 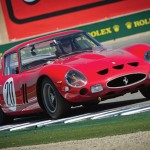