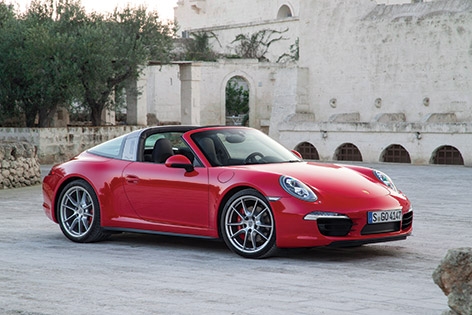 In 1965, Porsche presented the 911 Targa at the Frankfurt Motor Show as the world’s first safety-engineered cabriolet.

With its fixed roll-over protection bar, removable folding roof and downward folding rear window, the new 911 variant mainly addressed the heightened awareness of safety felt by American customers. The word Targa is derived from the famous Italian road race, the Targa Florio, which took place in Sicilia between 1906 and 1977. Since the middle of the1960s, it has stood for the open-top concept which was new at the time. The 911 Targa was launched on the market in 1967.

Following a very long trip from Arizona with a stopover in Frankfurt, Germany to meet the rest of the “elite” group of 13 American journalists invited to drive the all-new Targa, I finally arrived in Bari, the regional capital of the Puglia region. Puglia is a Southern Italian region bordering the Adriatic Sea to the east, the Ionian Sea to the southeast and the Strait of Òtranto and Gulf of Taranto to the south. Bari was a place that allowed Porsche to express the essence of the Porsche lifestyle and brand in general, as well as to celebrate the Italian Targa name. Porsche selected one of the nicest five-star luxury resort hotels with stunning, stylish accommodations that embrace typical Puglian features. The Borgo Egnazia hotel has been designed in the manner of a traditional Apulian village set within 20 hectares along the Puglian coast of Southern Italy.

After our first night of sleep at Borgo Egnazia, I was paired for our day of driving with Liz Bond, the journalist from Excellence magazine. We elected to drive the new Porsche 911 Targa 4S. Like its predecessor, the new generation Targa is launching onto the market in two variants with all-wheel drive exclusively. In the 911 Targa 4, the heart of a 3.4-litre flat-six engine beats with a power output of 257 kW (350 hp). Fitted with PDK and the Sport Chrono package, the new 911 Targa accelerates from 0 to 62 mph in 4.8 seconds and reaches a top speed of 175 mph with a manual transmission. The top model is the 911 Targa 4S, which develops 294 kW (400 hp) from a 3.8-litre engine. Its top speed is 184 mph, and it handles the benchmark sprint to 62 mph in 4.4 seconds when equipped with PDK and the Sport Chrono package.

After driving only 50 of 200 miles scheduled for the day, I felt that this new Porsche model is poised to have incredible success among Porsche and sports car lovers, since everything seemed so perfect. The interiors of the new 911 Targa models offer typical high-quality 911 convenience and comfort features in a well-designed layout. This lets the driver fully concentrate on what matters most: the unique driving experience. Near the end of our drive, Liz and I stopped in Savelletri, a small fisherman’s hamlet by the Adriatic Sea. After visiting the local fish market, we had lunch in a typical Southern Italian seafood restaurant.

The new 911 Targa is the fascinating symbiosis between the timeless design of the original Targa and the contemporary sportiness of the seventh 911 generation. The return to the original concept with its characteristic fixed Targa bar breathes new life into the legend of the 911 Targa in the new models. It renews the Targa tradition with an innovative roof concept. A significant advantage of the new Targa roof system is the excellent level of comfort it offers in terms of noise and climate inside the car. When the roof is closed, the new 911 has almost the same noise and climate comfort as the 911 Carrera Coupé. Since 1965, the Targa has held a firmly-established position within the Porsche 911 family, representing about 13 percent of all 911 cars ever sold. The new Porsche 911 Targa will go on sale this summer. 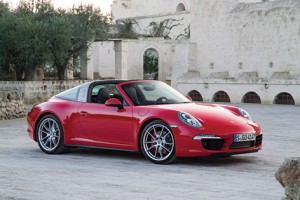