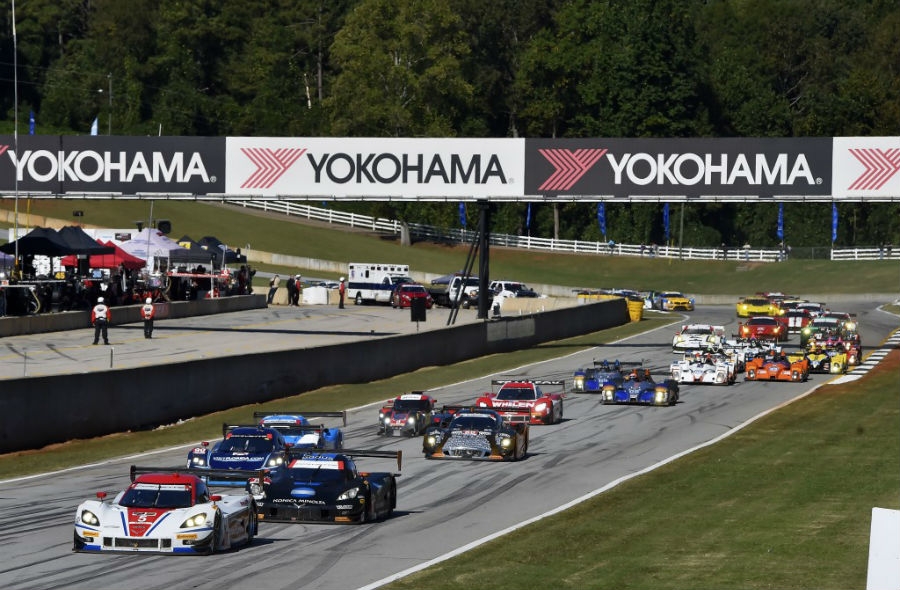 Ricky and Jordan Taylor co-drove the No. 10 Wayne Taylor Racing Konica Minolta Corvette DP with Max Angelelli to victory, holding off the No. 5 Action Express Racing Corvette DP by 11.062 seconds. They completed 400 laps – 1,016 miles – as the brothers became the first American-born drivers to win the event overall.

While it was denied the race victory, Action Express piled up several accolades throughout the event. They clinched the TUDOR Championship team title with the waving of the green flag, and less than two hours later Fittipaldi and Barbosa drove the required distance to secure the drivers’ crown.

At the eight-hour mark, the team wrapped up the $100,000 Tequila Patrón North American Endurance Cup team championship by leading the second segment in the unique competition rewarding competitors in the four endurance races in the TUDOR Championship: the Rolex 24 At Daytona, Mobil 1 Twelve Hours of Sebring Fueled by Fresh From Florida and Sahlen’s Six Hours of The Glen.

Scott Pruett, Memo Rojas and Scott Dixon took third, one lap down in the No. 01 Telcel Chip Ganassi Racing with Felix Sabates Ford EcoBoost/Riley, followed by the No. 0 DeltaWing DWC13 of Andy Meyrick, Katherine Legge and Gabby Chavez.

An accident involving Prototype Championship leader Sean Rayhall in the No. 25 8Star Motorsports ORECA FLM09 set up a seven-minute charge to the checkered flag. Jordan Taylor was up to the task, sprinting away from Barbosa to claim the team’s second victory of the season.

CORE autosport’s Colin Braun finished second, 10.990 seconds behind in the No. 25 Flex-Box ORECA FLM09, as the team failed to sweep the four Patrón Endurance Cup races. Braun and Jon Bennett added the PC team title to the drivers’ titles they clinched at Austin’s Circuit of The Americas, and also joined James Gue in winning both team and drivers’ championships in the Patrón Endurance Cup in the No. 54 Composite Resources entry.

Team Falken Tire closed out one era of the Petit Le Mans powered by Mazda with a victory last season, and opened up a new era Saturday with a breakthrough victory in the first TUDOR United SportsCar Championship race at Road Atlanta with its No. 17 Porsche 911 RSR.

Bryan Sellers and Wolf Henzler repeated their 2013 triumph for Team Falken Tire in the final race for the American Le Mans Series presented by Tequila Patrón, and were joined in this year’s victory by Marco Holzer. It wasn’t easy, however, as Henzler had to hold off a late-race charge from the No. 912 Porsche North America Porsche 911 RSR of Michael Christensen following a full-course caution.

The No. 93 Dodge Viper SRT GTS-R entered the race with a seven-point lead in the season-long team championship ahead of the No. 3 Corvette Racing Corvette C7.R. After Jan Magnussen was caught up in a pit-road incident two hours, 45 minutes into the race in the No. 3 Corvette, SRT Motorsports was suddenly in the catbird seat. But what appeared to be a rather smooth drive to the championship certainly was not as the team had to nurse a hot gearbox throughout much of the 10-hour race.

It was a sixth-place finish for the team and Bomarito, who entered the race with a share of the points lead with regular co-driver Wittmer. In a bid to increase its odds for a championship, Wittmer moved to the team’s No. 91 entry and secured the driver championship with a third-place finish in the car co-driven by Marc Goossens and reigning Indy 500 winner Ryan Hunter-Reay.

Porsche also won the manufacturer championship in the four-race endurance competition, which includes the Rolex 24 At Daytona, Mobil 1 Twelve Hours of Sebring Fueled by Fresh From Florida and the Sahlen’s Six Hours of The Glen.

Audi won its first TUDOR United SportsCar Championship race Saturday in the Petit Le Mans powered by Mazda with Paul Miller Racing breaking through for its first victory in the 10-hour endurance classic with drivers Christopher Haase, Matt Bell and Bryce Miller in the No. 48 Audi R8 LMS.

The race came down to an intense final few minutes for the Paul Miller Racing team as Haase was forced to defend the No. 58 Dempsey Racing Porsche 911 GT America of Jan Heylen on a restart with seven minutes remaining. Haase beat Heylen to the stripe by 3.121 seconds for the race win.

AIM Autosport and Ferrari clinched the team and manufacturer championships in the race’s opening four-hour segment with Bill Sweedler and Townsend Bell taking the driver championships as soon as they hit the required two hours, 45 minutes of drive time needed to score points. 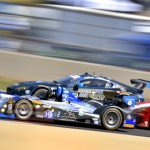 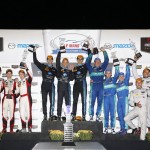 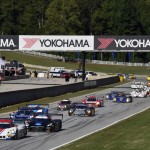 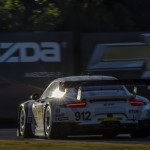 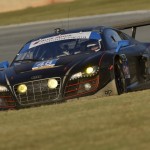 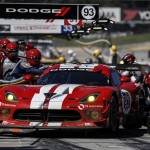