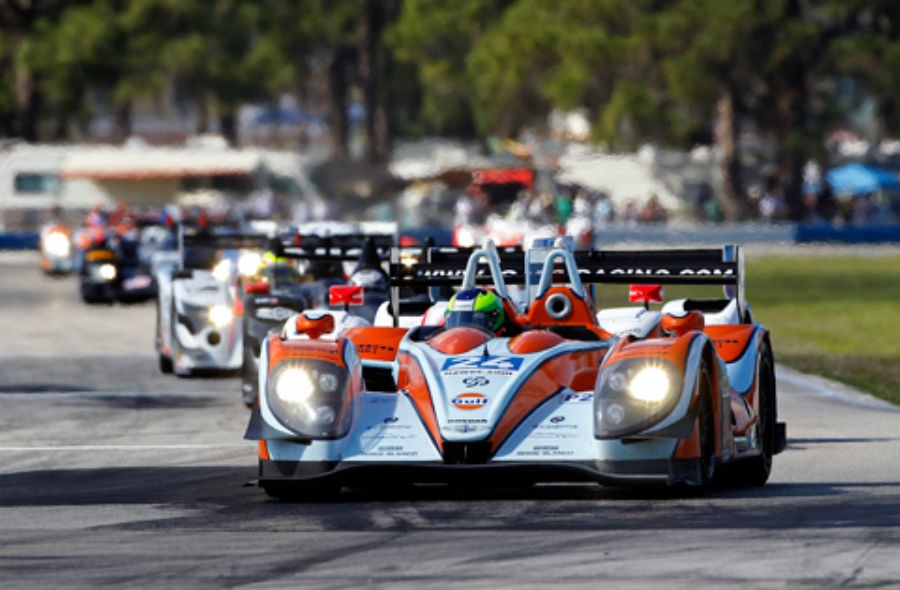 On the 17th of March, Sebring International Raceway in Florida hosted the opening round of the 2012 FIA World Endurance Championship, welcoming a large field of over 60 cars entered for the 60th anniversary of the prestigious 12 Hours of Sebring.

The 2012 Mobil 1 Twelve Hours of Sebring Fueled by Fresh from Florida was also the season opener of the 2012 American Le Mans Series (ALMS) presented by Tequila Patrón. The ALMS is the world’s leading sports car series and is recognized as the Global Leader in Green Racing. 2012 marks a memorable motorsport year, as all three major sports car endurance races are celebrating an anniversary. Earlier this year, the Rolex 24 At Daytona held its 50th anniversary, and later, in June, Les 24 Heures du Mans will have its 80th running.

Sebring International Raceway opened in 1950 and that same year held the first American sports car race run in strict accordance with international rules. This was just four years after the former Hendricks Field Airport was turned over to the city of Sebring. During World War II, the airport was used as a training facility for US Boeing B-17 bombers, yet when the war ended, the airport no longer served any military need. Following upon its sporadic success as a commercial airport, race promoter Alec Ulmann suggested organizing a ‘Little Le Mans’ endurance race over a course combining runways and asphalt roads, a configuration that would hardly change over the next 60 years. The first twelve-hour race in southern Florida took place in March 1952 and had 32 entries, including several international teams and drivers. After the race’s initial success, Ulmann convinced the Fédération Internationale de l’Automobile (FIA) in Paris that an American event should be included in its new championship and that his event was the perfect fit. The concrete course, once used as runways, characterizes the historical part of the raceway still in use.

As part of a world championship, the winners list at Sebring features some of the best drivers of different decades. Stirling Moss (GBR), Mike Hawthorn (GBR), Juan Manuel Fangio (ARG) and Phil Hill (USA) were all among the early winners in the 1950s. Various Formula One champions also visited victory lane in the 60s and 70s: John Surtees (GBR), Mario Andretti (ITA/USA), Jacky Ickx (BEL), Bruce McLaren (NZL) and Jo Siffert (SUI). In the golden age of sports car racing, Sebring was considered one of the crown jewels on the annual calendar, together with the Rolex 24 At Daytona and Les 24 Heures du Mans, events that, even after many decades, are still on the top of each driver’s “to do” list. “I went there only once, in 1966, but I remember the special ambiance and the challenging conditions,” remembers three-time Formula One World Champion and Rolex Testimonee Sir Jackie Stewart. “Together with Graham Hill (GBR), I drove an Alan Mann Ford GT and was in the top ten most of the time until an engine problem forced us to retire.” The 12 Hours of Sebring was one of the rare sports car events in which this famous Scottish driver competed.

As racing speeds increased, along with the demand for more safety, the Sebring circuit received its first layout changes in the 1980s. By then, the 12-hour race had become a round of the popular American IMSA Series and winners of that era included famous Indianapolis 500 winners like Al Unser (USA), A.J. Foyt (USA), Arie Luyendyk (NED) and Bobby Rahal (USA). Since the turn of the century, the 12 Hours of Sebring has been a round of the American Le Mans Series, a series affiliated with Les 24 Heures du Mans, and which therefore helped attract several European teams like Porsche, BMW, Audi and Peugeot.

With over 60 entries this year, the American event at Sebring once again proved to be a popular race. “We are fully committed to the FIA WEC and are happy to be back at Sebring,” says Dr. Ullrich, Audi Motorsports Director. “Over the years, we have had great successes here and we found this race and location a perfect test bed for the European season. Last year, we stayed after the race to test our new Audi R18, and in 2006, we debuted our Diesel powered R10 here.” Testing at Sebring has always been on the calendar of the top teams. For example, in 1967 Ford debuted its magnificent Mk IV prototype in Sebring. It was the only event this famous sports car ran before going to Le Mans and eventually winning the French 24-hour race. And although the Sebring Raceway is not on the INDYCAR calendar, the location is known as a famous pre-season testing ground for the open wheelers. To further underline the international recognition of Sebring, in 1959 the raceway hosted the first American Formula One Grand Prix. After 42 laps at this demanding track, New Zealander Bruce McLaren won his first Grand Prix at a record young age of 22. It wasn’t until 2003 that Fernando Alonso (ESP) became a younger winner.

This year’s 60th edition of the 12 Hours of Sebring was the opening round of the 2012 FIA World Endurance Championship, a newly created sports car series that includes eight events to be run on four continents. After Sebring, there are races scheduled at Spa-Francorchamps, Le Mans and Silverstone in Europe, before the series moves on to Brazil, Bahrain, Japan and China later this fall. These races are open to two classes: Le Mans Prototypes (LMPs) and GTs. Each class has two sub divisions: LMP1 and LMP2, and GTAM Pro and GTAM Amateur. Major manufacturers engaged in this championship include Audi, BMW, Honda, Ferrari, Aston Martin, Toyota, Chevrolet and Porsche. Of special interest this year will be the Hybrid entries of Audi and Toyota. This state-of-the-art technology will find its way into international sports car racing for the first time this season.

The 60th anniversary race was an event full of tension all the way to the finish. After covering 325 laps at Sebring International Raceway, it was the Audi team of Tom Kristensen (DEN), Allan McNish (GBR) and Rinaldo Capello (ITA) that repeated their 2006 and 2009 victories. The FIA WEC LMP2 class proved surprisingly strong with three entries finishing in the overall top five. In the GT class, the win was not decided until the last one hundred meters, after Joey Hand (USA) barely steered his BMW past the Ferrari of Olivier Beretta (MCO).

Perfect Florida weather allowed a sell-out crowd in Sebring to enjoy fierce competition in all FIA WEC classes. Combined with sports car racing in the American Le Mans Series, a total of 62 cars took the green flag at 10:30 that morning – fine proof of the popularity of endurance racing. Starting the race as favorites, the Kristensen/ McNish/ Capello Audi team was in charge for the complete duration of the race. Despite a few minor issues, two of the three German cars finished first and second overall – their first double in Sebring since 2005. For Tom Kristensen, it was his sixth win at the Florida raceway; the Rolex Testimonee is now by far the most successful driver in the event’s sixty-year history. “Sebring over the years has become a tradition, and I am humbled and honored to win the anniversary edition of this great American sports car race. After celebrating sixty years of Sebring, we now look forward to new technology with the introduction of hybrid,” says the Danish driver after his win. “This year marked 50 years of Daytona, 60 years here and 80 years for the big one, Le Mans, in June. 2012 is an important year for sports car racing and it feels fantastic to start it on top.” Chasing the Audi team all day, the Pescarolo–Judd team (Bouillon/Collard/Jousse) finished third in the LMP1 class and sixth overall. Third overall, as well as fourth and fifth, were the strong LMP2 entries of Honda. Part of the winning LMP2 team was Scottish driver Ryan Dalziel, who also set pole at the 50th edition of the Rolex 24 At Daytona earlier this year.

While Audi’s win was never challenged, the traffic on the track made it far from easy and the GT competitors also had an incredibly exciting race. At the finish, the BMW of Hand had an advantage of just a few meters over the Ferrari of Beretta. For the last three hours of the race, these two, and the Corvettes, had a memorable battle. Going into the last lap, Hand was just ahead of Beretta, however the Ferrari driver passed the BMW and stayed ahead until the last corner. Hand overtook the Ferrari at the line after the red car had encountered a puncture a few hundred yards earlier. “Not only was the last lap exciting, the last three hours were!” says a happy Hand after the finish. 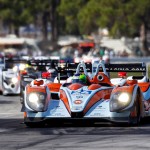 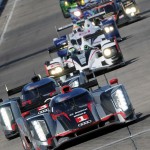 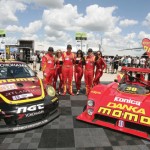