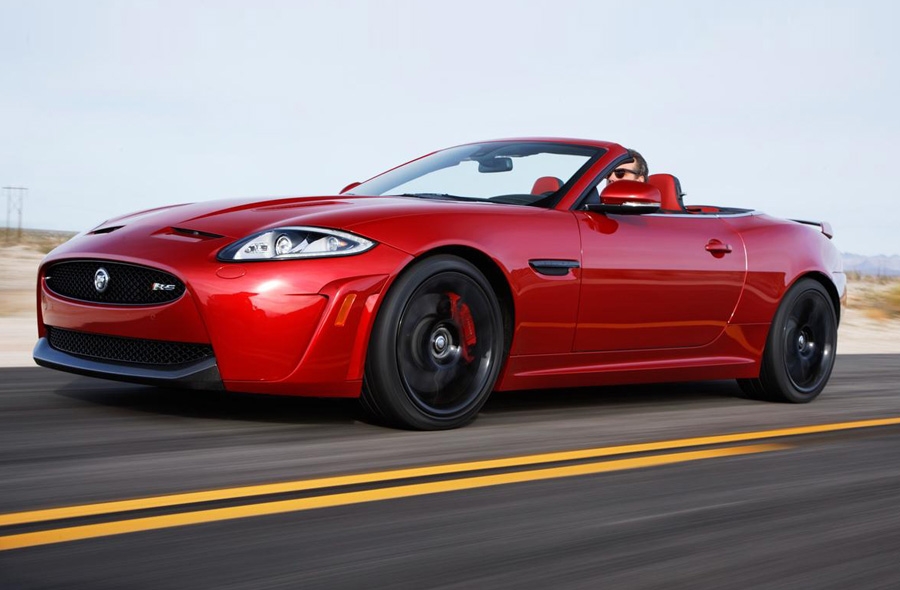 Thanks to Jaguar Land Rover North America, I was invited to the global launch of the 2012 Jaguar XKR-S Convertible in San Diego, California.

The pinnacle of the Jaguar sporting range – the XKR-S Coupe – is now joined by a convertible body style which offers the same enticing blend of abilities, while offering driver and passenger a heightened connection with their surroundings. The XKR-S Convertible embodies all of the characteristics that have always defined legendary Jaguar GTs — explosive performance, precise handling, relaxed comfort and discreet luxury — while taking Jaguar to a new performance level. The XKR-S Convertible receives the performance, dynamics, design, and interior upgrades originally introduced on its coupe sibling to create the most powerful and fastest open-topped grand tourer Jaguar has ever built.

The day trip started with a briefing at Beach Village at Hotel Del Coronado on the legendary Coronado Beach of San Diego. The Jaguar media team selected one of the six XKR-S Convertibles and I was paired with automobile reporter Patrick Paternie, freelance writer for Autoweek, who regrettably passed away three weeks after we shared that exceptional day together.

Just before leaving the hotel, Patrick and I spent some time admiring our new red Jaguar. Exclusive to the XKR-S models are carbon-leather trimmed versions of Jaguar Performance seats which feature integrated head rests, racing harness cut-outs and increased side bolster support to hold driver and passenger securely during high-speed cornering. The 16-way adjustable, heated seats feature highlights of carbon leather and contrast micro-piping unique to the model, while carbon leather is also used to accent the cabin and emphasize the car’s assertive nature. Superb tactile interfaces are provided by the multifunction three-spoke, leather-wrapped, heated steering wheel and Jaguar-embossed bright stainless steel pedals.

The morning day trip called for a 150 mile ride through the winding roads bordering the USA/Mexico border via Campo to El Centro, with a coffee stop at the Motor Transport Museum of Campo. This ride allowed both Patrick and I to understand that this Jag convertible was the real deal. The building block for the car’s explosive performance is an updated version of the 5.0-liter supercharged V8 engine, which produces 550 hp and 502 lb-ft of torque. Driving the rear wheels through a six-speed automatic gearbox and an active differential, this propels the XKR-S Convertible to 60 mph in 4.2 seconds and up to an electronically-limited top speed of 186 mph.

Just before noon, we were the first of the six media cars to arrive at our lunch destination, the Naval Air Facility (NAF) in El Centro, California. As soon we made it to Hangar 7, we were greeted by our own private Blue Angels F-18 air show less than ¼ mile from our own eyes! NAF is the “winter home” of the world-famous Blue Angels, the Navy’s Flight Demonstration Squadron. The El Centro Air Base also gained fame with the filming of Tom Cruise’s movie Top Gun.

Right after lunch, the NAF runway supervisor gave us a briefing to explain what would be for us the “plat de resistance” of the day: a 175 mph ride on the 9,500-foot east/west “Top Gun” runway of the NAF El Centro. Jaguar was able to make a deal with NAF El Centro to close the runway for one hour every day of their three-day media launch event to let the journalists from around the world drive the XKR-S Convertible at maximum speed.

At 1:00 pm I went into our new blue Jaguar XKR-S Convertible and buckled up with my co-driver Patrick. I have to admit I had a lot of anxiety, but also a lot of excitement knowing what was to come. I followed the first three cars ahead of me to the end of the runway, and then the cars driven by international reporters went on their ride of a lifetime! Now it was my turn. I got the green flag to go and at that particular moment, the wind was blowing at over 100 mph, so I was apprehensive since I did not how it would affect my ride on the runway. I put my left foot on the brake, revved up the engine and let it go making sure not to screech the Pirelli tires too much. My ride started in automatic mode, then I was flat out right away and could see the speedometer and the rpm go up. When I reached 150 mph it started to look unreal since you are and feel alone in the middle of nowhere and the next thing you know is that you are trying to keep it straight like you were asked to at the briefing.

At 170 mph I remembered that one of the pilots told us that his F-18 takes off at that speed, so I started to feel more nervous, Then, at 175 mph I could see a shadow of a Navy officer with a flag about 500 ft away from me, ready to wave the checkered flag of my run. The last moment I remember is taking the checkered flag a second later while watching the speedometer at 180 mph. I was immediately elated but stressed since the fact of lifting the accelerator created a very special effect that gave me a kick that felt like I was braking hard but I had not even put my foot on the brake yet! I made the end of the runway turn at over 140 mph and could not stop smiling for the next hour since the experience was so exhilarating and unique.

The rain started to fall hard in the afternoon and Patrick and I took turns driving back to San Diego, enjoying the XKR-S active differential, the quality of the supercharged AJ-V8 power train and the Jaguar drive control with dynamic mode. The new $138,000 XKR-S Convertible represents the pinnacle of performance and glamour in motoring. There is nothing as liberating as experiencing life from behind the wheel of an open-topped Jaguar and the new XKR-S Convertible takes the Jaguar GT experience to new heights. But hurry up, only 25 examples of the 2012 model year XKR-S Convertible will be sold in the US.