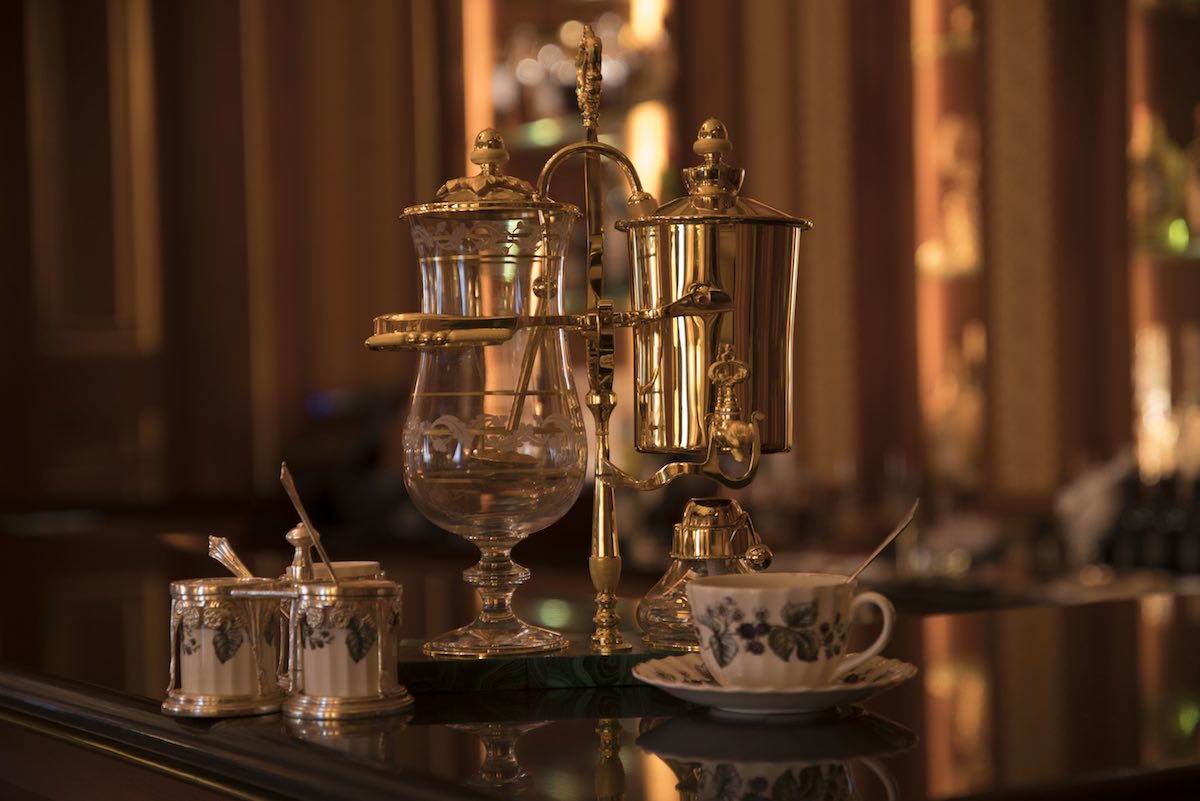 Every year more than 400 billion cups of coffee are consumed making the black brew the most popular beverage in the world. Some believe it’s an addiction to caffeine, that buzz that keeps you energized. Others consider it the ideal social drink. Coffee has been around for centuries and many legends surround its origin. Today, in a matter of minutes, you can have your favorite cup of Joe; but in the past, drinking coffee/making coffee was a ritual. 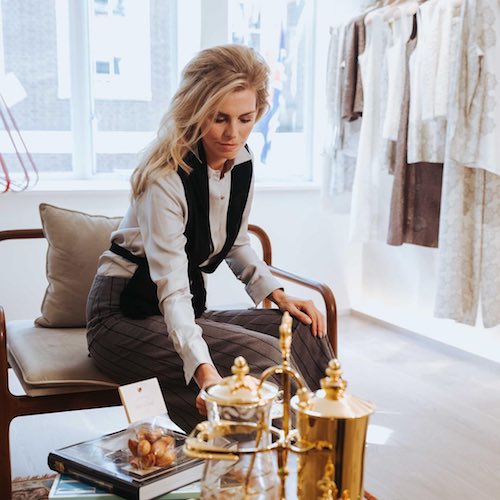 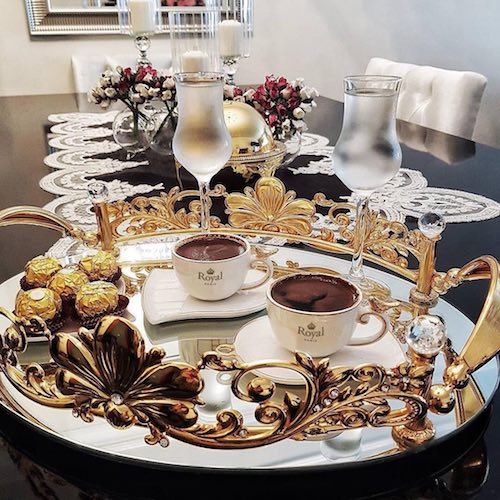 In the late 1850’s the Emperor Franz-Joseph of Austria and his wife Elisabeth, better known as Sisi, commissioned one of the most exquisite coffee machines with the intent of hosting an unforgettable banquet. The French company, Royal Paris, put together a team of artists, sculptors, metallurgists, and engineers to recreate the most outstanding coffee machines. The company’s desire is “to recreate an imperial experience for the most discerning palates and those who love to live well.” 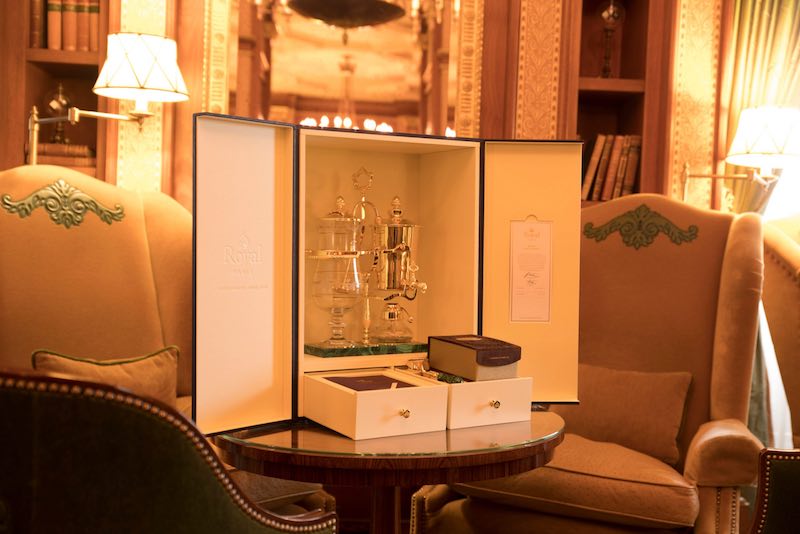 The Parisian sculptor, Monsieur Rieutort, personally chisels each coffee maker for 50 hours allowing a very limited production of six to eight pieces monthly. Every machine is custom-made from the glass work, numbered and hand-painted, at the Baccarat factory in Nancy, France, to the stone base polished and machined in Germany available in malachite, black obsidian, or azurite. The coffee makers are finished in 24K gold, copper, or silver in Paris, France. Family crests or initials can be engraved further adding to the exclusivity and ultimate legacy. The Royal Paris Royal Coffee Maker is without a doubt an object of art, a statement of elegance and luxury. 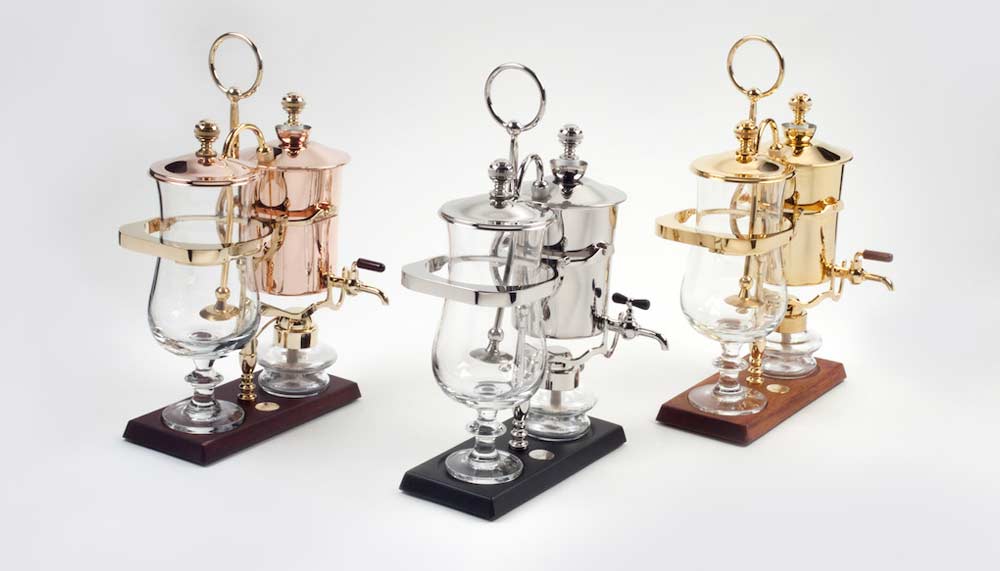 The Royal Paris pays homage to the antique art of coffee brewing bringing back the siphon system unanimously considered to be superior in preserving the beans’ full-body taste. The temperature of the water is key in creating the most excellent beverage. With this system by the time the boiling water moves through the pipet and mixes with the ground coffee, it has cooled a few degrees allowing the right temperature for the two to combine so the flavors are preserved, and the temperature isn’t scorching … but just right. The coffee is then separated from the grounds through a gold filter. The bitterness gets left behind and the result is a clear sweet coffee. This ancient system ensures the same high quality at every single use and also allows to add spices and liquors to the ground coffee before the brewing process.

For the ultimate experience, Royal Paris reserves a small portion of Black Ivory Coffee, the world’s rarest coffee, to sell to private consumers. The Black Ivory coffee comes from Arabica coffee beans consumed by elephants and collected from their waste. The taste of Black Ivory coffee is so unique because it is influenced by the elephants’ digestive enzymes which break down the coffee’s protein eliminating the burnt or bitter taste.

Royal Paris coffee makers are about elevating every moment and celebrating life at the highest level. It is about honoring tradition and creating a new legacy. As one high-net worth world traveler said “I’ve never seen anything quite like this.”