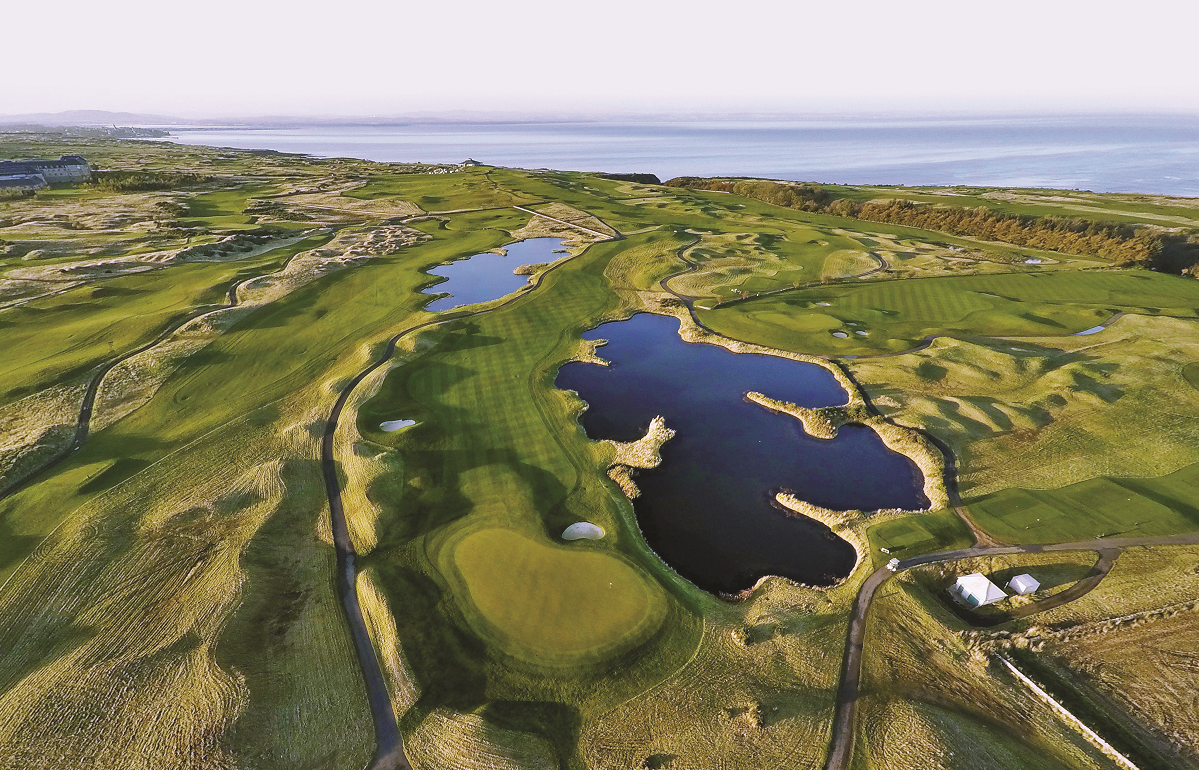 Scotland remains the only place where golf lovers can combine championship rounds with visits to nearby castles, distilleries or whimsical diversions like William and Kate tours. This land is much more than a haven for golfers. It’s a welcoming place where you’re compelled to mingle with the locals; if only to savor their storytelling wit and Scottish accents like a dram of fine Scotch. It’s a joy to see an entire town given over to golf, a truly idyllic expression of Scottish spirit and hospitality. 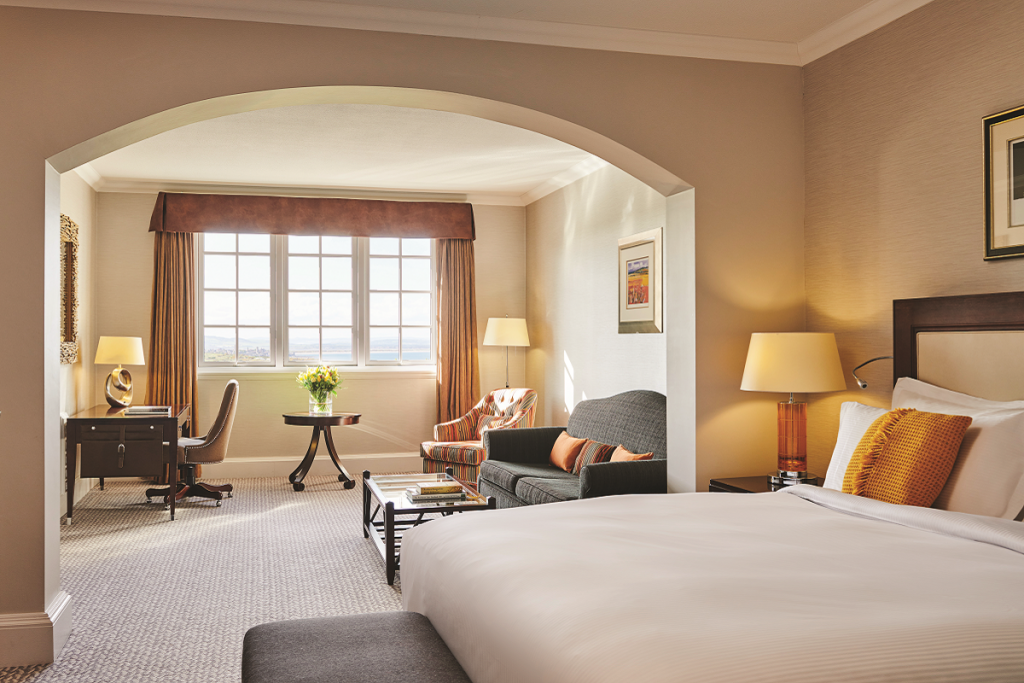 Contemporary luxury on a grand scale, The Fairmont St Andrews received a multi-million dollar revamp in 2017 and the results are rather ravishing. Boasting breathtaking views of St Andrews Bay, this wonderland of a hotel is a golfer’s utopia with two championship courses, the Torrance and Kittocks, on the hotel’s 520-acre grounds. It’s the kind of kindred place that caters to both golfers and the people that love them; in other words, The Fairmont St Andrews’ intoxicating bevy of posh facilities makes it a glamorous crowd pleaser. From couples’ getaways to family reunions, this stylish, modern resort offers a coastal escape on a fabulously storied site. 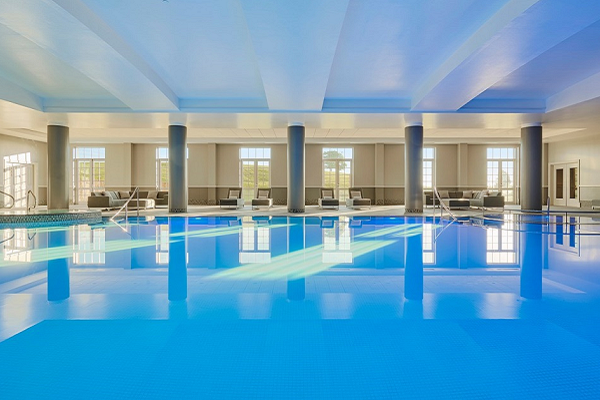 You’ll be seduced by the romance of all the little details at play here. In fact, it is here at the Fairmont that Kate Middleton first caught Prince William’s eye back in 2002, while modeling in a charity fashion show. The 80-foot-high glass topped Atrium played host that day and endures as the most esteemed event space in town, popular for exhibitions, galas and the newly launched Savoy Afternoon Tea. The venue also showcases a striking 60m long sculpture commission by artist George Singer. 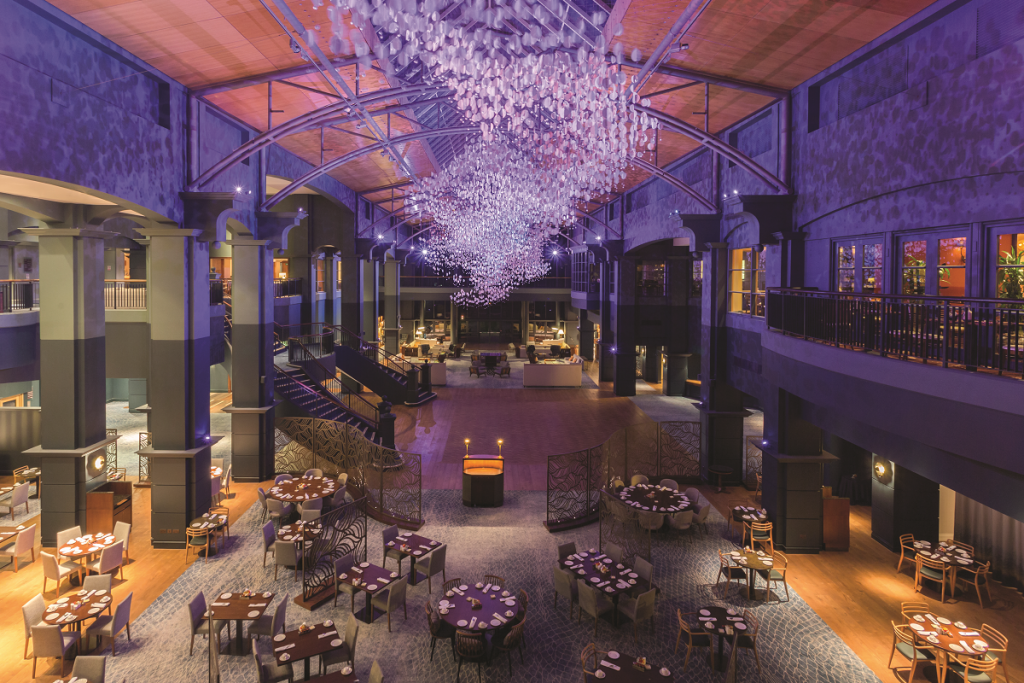 The renovation also heralded the arrival of a new restaurant, the Kittock’s Bar, as well as a redesign of the hotel’s 220 bedrooms and 19 suites, including the Kingdom of Fife presidential suite. Suites are both decadent and stylish with a nod to traditional maritime vibes, but the real showstopper lies in the bathroom. Think enormous walk-in shower and huge marble bath, perfect for long soaks after a blustery 18 holes.

The Fairmont St. Andrews’ two impeccable golf courses high above the sea, the Torrance and the Kittocks Courses, are Scotland’s most compelling golf developments of the new century. Showcasing completely new views of the Auld Grey Toon, the Torrance (named for its designer, Ryder Cup hero Sam Torrance) is a manufactured links, while the Kittocks is pure clifftop golf at its finest. Through the miracle of modern equipment, the Torrance plays as close as possible to ancient stone property boundaries, as if it had been there for generations. The 14th to the 18th holes are particularly photo worthy, with greens perched dazzlingly high above the sea. Opened in 2002, Kittocks is known to be trickier than Torrance, a severe, smoke and mirrors mistress. Views are magnificent, and so are the shot values. Though born in an American-style with man-made lakes, Kittocks honors the traditions of St Andrews with two double greens and numerous pot bunkers. 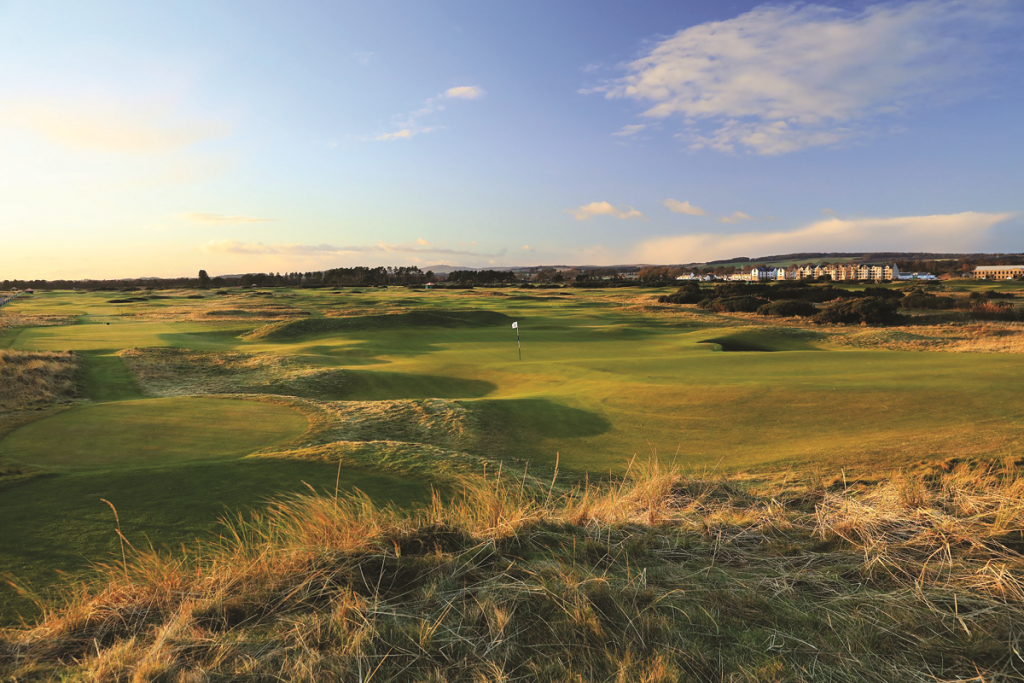 Bring your A game to Carnoustie and pray for favorable weather. This sprawling series of seaside links is considered one of the world’s most challenging courses. This iconic, leading golf destination is home to ‘Golf’s Greatest Test’. The history of this Tayside course is staggering to the uninitiated; the first record of golf being played here dates back to 1527. In 1842, a 10-hole course was laid out by Allan Robertson from St Andrews. Fifteen years later, an 18-hole course was fashioned by Old Tom Morris. James Braid extended the course in 1926 and it has hardly changed since.

Stalwart and stoic at first sight, Carnoustie is long at 7101 yards and its renowned burns have been known to test a champion’s judgement. Jockie’s Burn comes into play at the 2nd, 3rd, 5th, and 6th.

Beware the Barry Burn, a narrow hazard that plays a large role on the final two holes. A thrilling challenge for players, who must cross the hazard multiple times on both 17 and 18. The burn originally served an industrial purpose. The linen industry drew water from the burn, and its current drove the massive waterwheel at the nearby mill.  The Barry Burn wraps three sides of the 17th fairway, hence the hole is often dubbed the “island”. Out-of-bounds to the left and deep bunkers to the right of the landing area, one must be bold, aiming down the left side, skirting past with enough steam but staying in bounds. 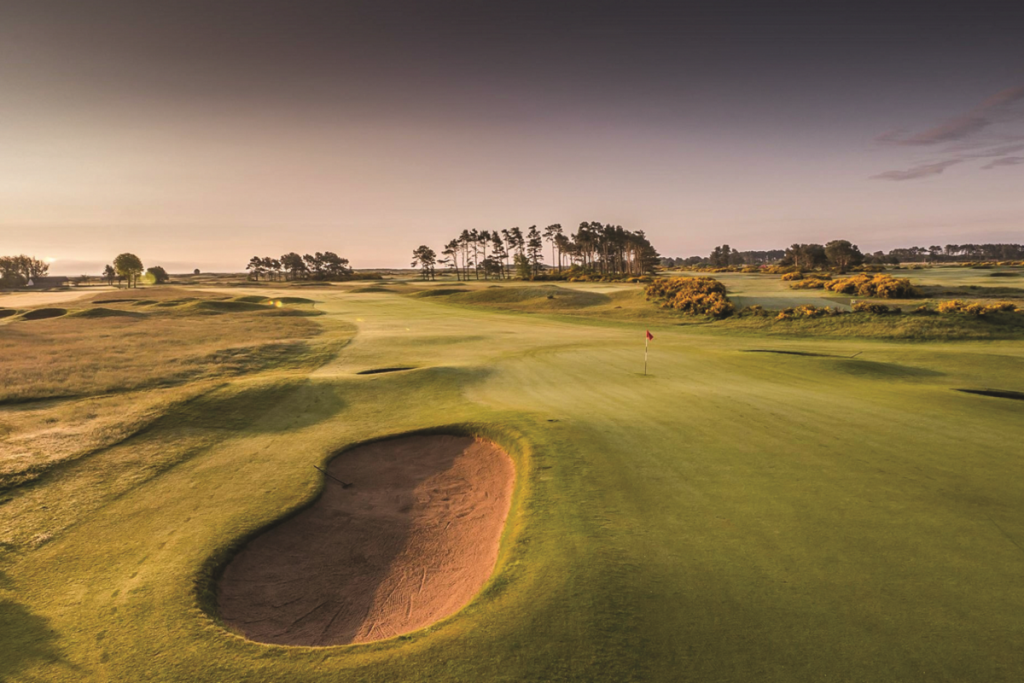 Make plans to stay a while, in order to play all three 18-hole courses, the Championship Course, the Burnside Course and the Buddon Links Course. The Championship Course played host to The 147th Open in 2018, with Francesco Molinari becoming the Champion Golfer of the Year. The finishing holes are especially merciless at this seven-time Open Championship venue and many consider this the greatest back nine in golf. Their massive pro shop is a destination in itself, with a stellar inventory of top brands including some only available in Scotland.

Triumph of Design at Trump Turnberry Poised on the spectacular Ayrshire coast and steeped in history, Trump Turnberry has endured as a landmark on Scotland’s renowned coastline since 1906. In 2014, The Trump Organization purchased the property; with an investment of $247M, the hotel was restored and the storied Ailsa course was transformed under the stewardship of renowned architect, Martin Ebert. The Clubhouse was renovated, and an opulent new ballroom was added to the footprint of the resort. The thrilling King Robert the Bruce course opened in 2017, named after the castle boy who became King in 1306. Once upon a time, golf at Turnberry was a secret treasured only by locals. These days, golf culture and the highest level of competition thrives here; the course has played host to four Open Championships including the famous Duel in the Sun in 1977.

Martin Ebert made vital improvements to the previous Ailsa design. Slight changes to the opening holes lead to the par-three 4th, where the championship tee and green were moved closer to the water, making for a grander opening overture. Onwards to the 6th, this hole used to be an exceedingly long haul with a deceptive false front. The par three was shortened, tees moved from below the green to above it on dunes next to the beach. The result is quite a joy. 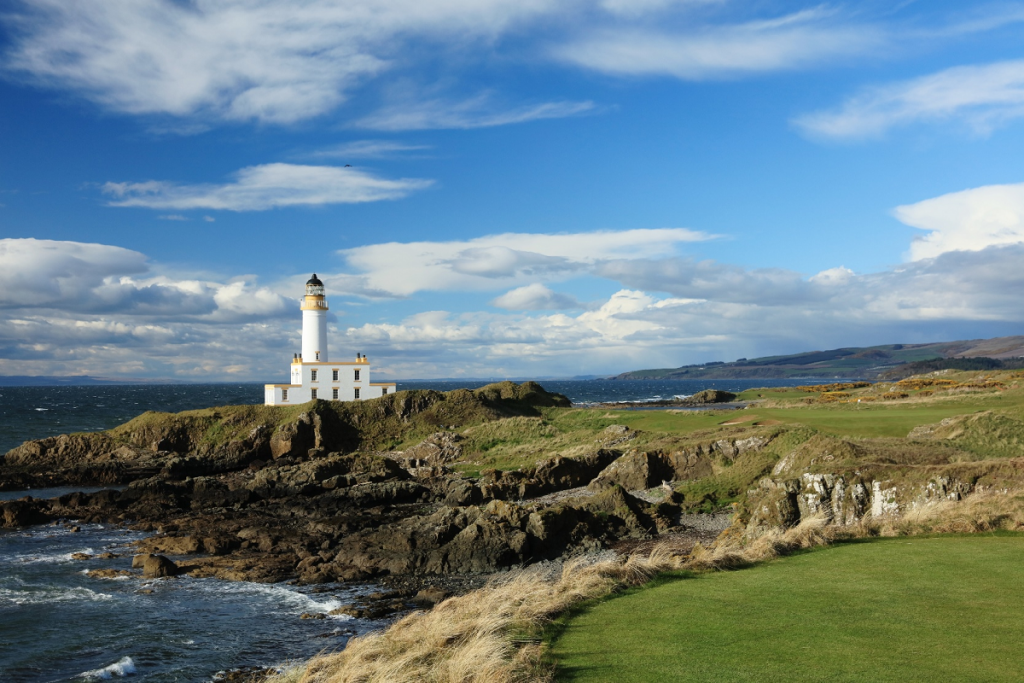 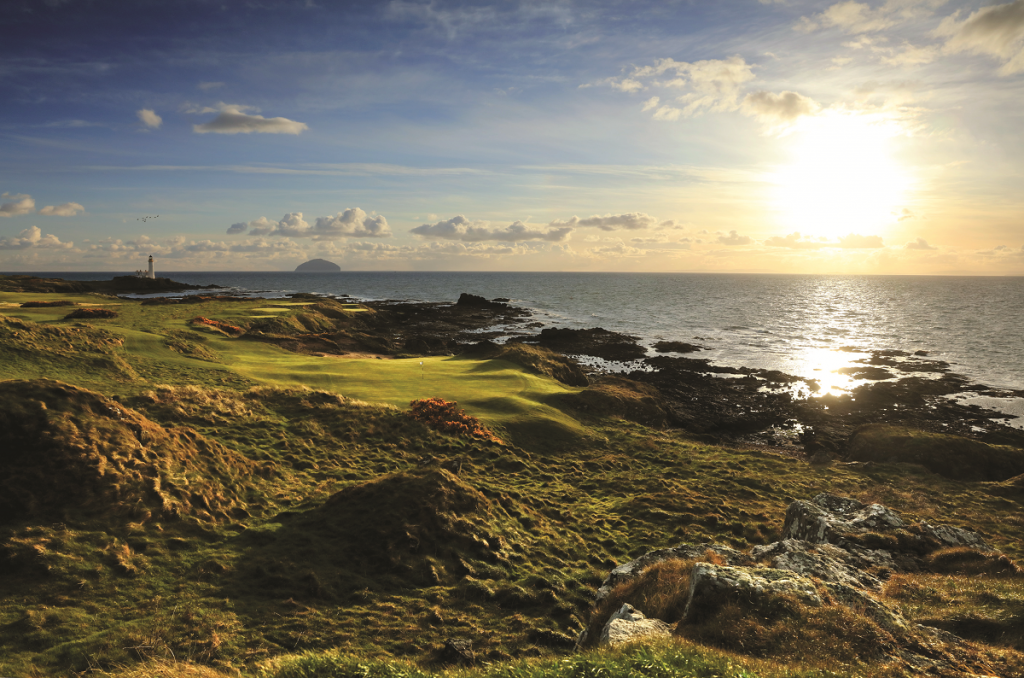 The most compelling changes came to the 9th, where a short par four converts to a striking par three. What was once a blind tee now offers a range of tees allowing for more or less forced carry over the cliffs. Prior to Trump’s purchase, the lighthouse sat underutilized on a far corner of the course. It’s been reborn as a hospitality hub with a terrace, food service kitchen, and even a suite where guests can spend the night.

Six Centuries of Golf in the Game’s Grandest Town St. Andrews has been a pilgrimage site for nearly 2,000 years. In the Middle Ages, pilgrims came to venerate St. Andrew; these days, it’s golfers who want to play in the sport’s birthplace. Golf has been played on the Links at St Andrews since 1400 AD and the Old Course is renowned the world over as the ancestral home of golf. The game proved so addictive that it was banned in 1457 by King James II of Scotland, for distracting young men from archery. The embargo endured under succeeding monarchs until James IV, an avid golfer, lifted it in 1502.

By the 19th century golf was a way of life for many locals; it remains a major part in the aura and economy of St Andrews today. Over 600 years, one rudimentary track hacked through wild gorse and heather has evolved into seven public golf courses, attracting thousands of golf devotees from around the globe. This precious stretch of seaside property is known to Scots simply as the Links. In 1754, the Royal and Ancient Golf Club was founded under its original name of the Society of St Andrews Golfers. Originally an elite cohort of 22 noblemen, professors and landowners, the club now governs the rules of golf everywhere except the United States. The esteemed club also runs the Open Championship. The Old Course, established in 1552, can make grown men tear up with emotion at first sight. Each hole on the Old is endowed with lore, legend and a name all its own: Burn for 1, Ginger Beer for 4, Bobby Jones for 10. Six centuries and counting, the Old continues to be a global bucket list topper. The Open Championship was first played on the Old Course at St Andrews in 1873. With the 29th staging of the world’s premier golf event taking place on the Old Course in 2015, St Andrews has hosted the event more than any other venue.

For visiting golfers, the Jubilee Course is a refreshing delight among the seven Links Trust courses, offering challenges on par with the Old, New and Castle. Originally opened in 1897 as 12-holes intended for women, it was later stretched to a full 18 holes in 1905, extending the course through a gap in the dunes. Locals flock to the Jubilee, affectionately dubbed “The Joo”, when they tire of congested tee sheets on the Old Course. Experienced golfers can get in 18 holes in about three hours.

The Jubilee’s greens are compact in comparison with the Old Course’s colossal fairways, defended by natural swells and deep bunkers. One double green is shared by the 4th and 14th holes. Like the Old Course, angle of attack spells make or break when approaching the Jubilee from the fairway. 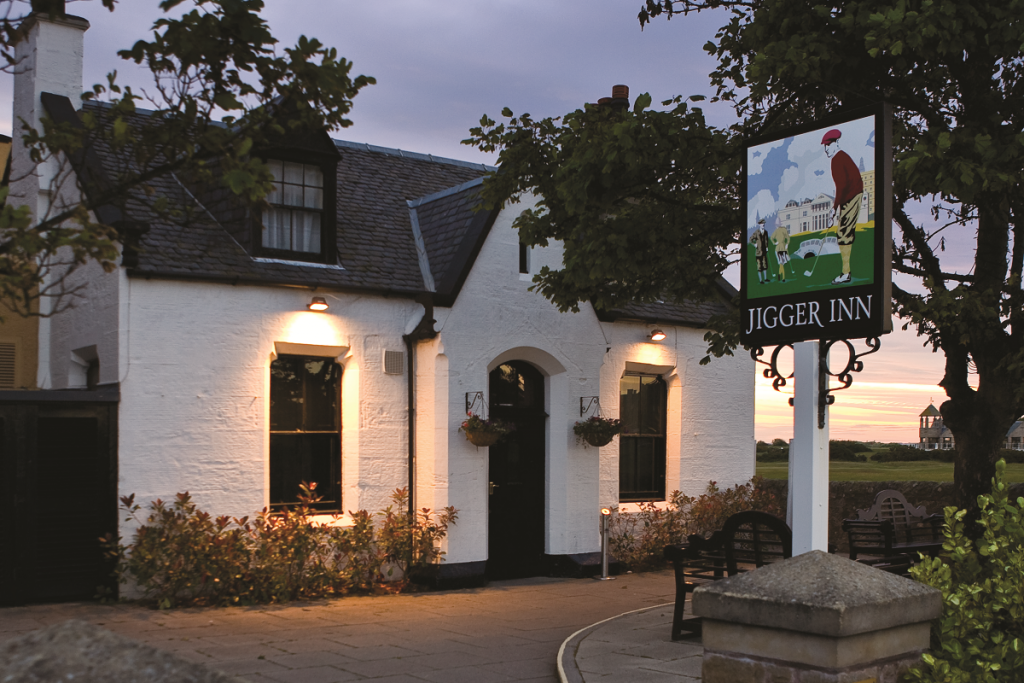 The most infamous hole is the par-4 15th, named “Steel’s Gem.” From the tee, you’re going in blind – the fairway wraps around a sweeping dune to an ensconced green with a steep, false front. As one can imagine, this hole has hosted more existential meltdowns than Larry King. From here, it’s three holes back toward town; the aesthetic backdrop of church and clubhouse fosters sheer giddiness in the heart of pilgrims – a reverence for the hallowed grounds of where the game began.

Michelin on the Moss The Peat Inn, by St Andrews dates back to the 1700s and is, today, a luxury five-star dining destination. Michelin Star Chef Proprietor, Geoffrey Smeddle, sources the finest Scottish ingredients to create ravishing plates of contemporary cuisine. Idyllic rural surroundings give the Inn a relaxed ambiance, while endowing the kitchen with the trophies of seasonal local produce. Smeddle goes big on bold techniques, without relinquishing depth of flavor. Expect a modern twist to classic dishes like sea bream tartare and cauliflower soup. 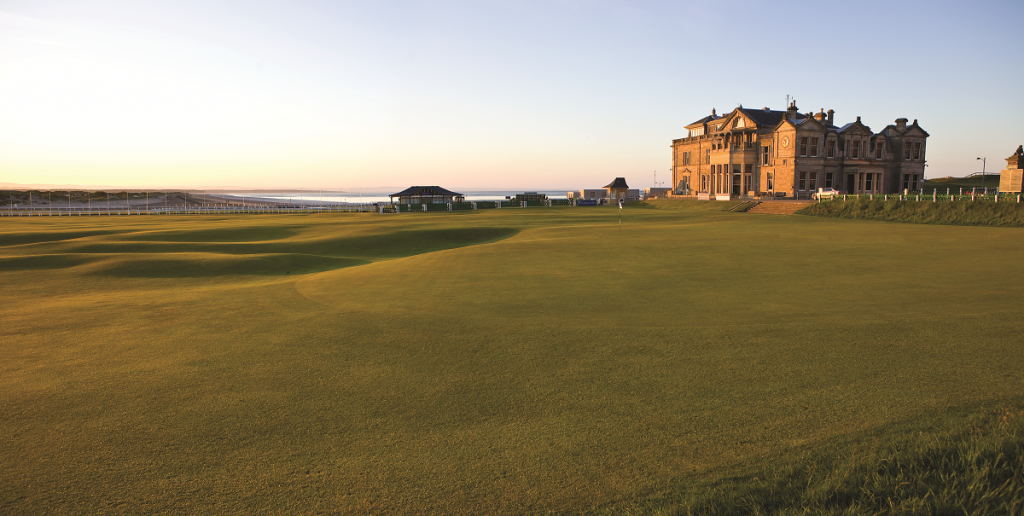 Interested in a golf concierge style service while abroad? The Experience St Andrews arranges luxury golf packages at a number of must-play, premier golfing venues in Scotland, England and Ireland. The Experience St Andrews is also an authorized ticket provider for The 149th Open in 2020 at Royal St Georges. All packages provide a complete service from the moment you arrive, including accommodations, transfers and entrance to the event.