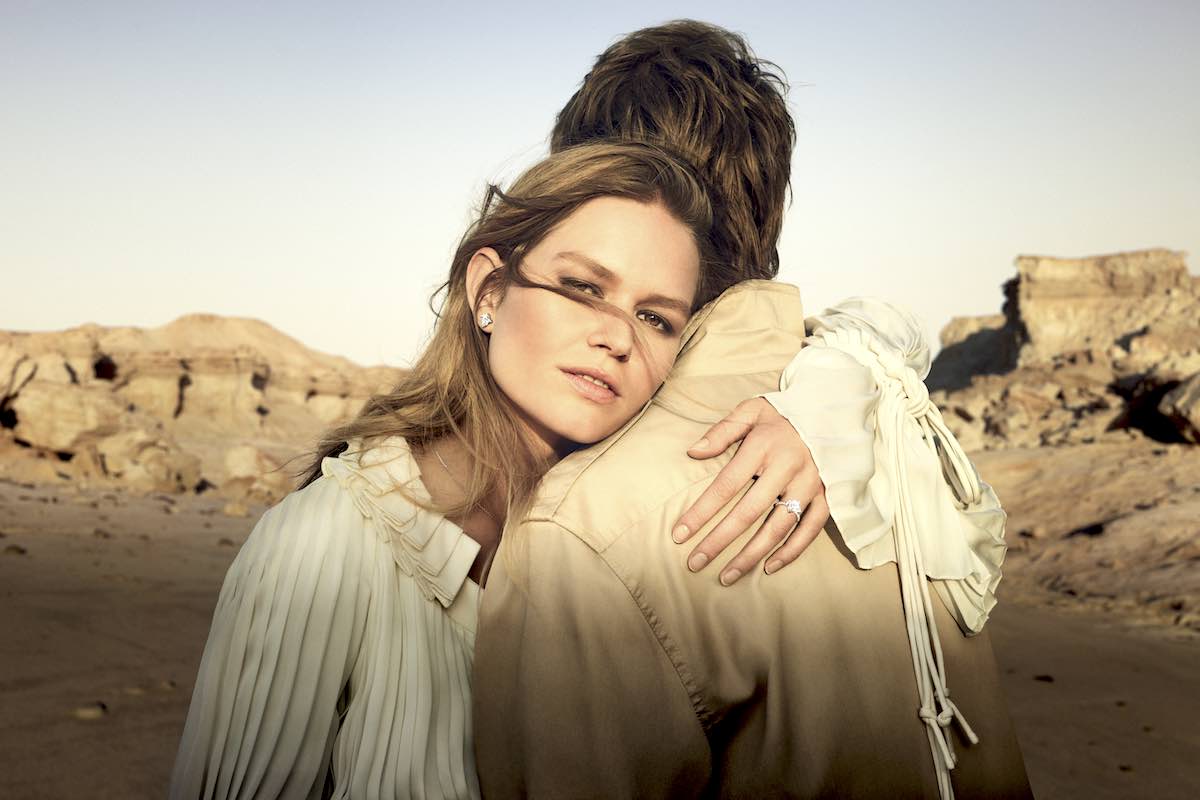 From the dawn of the passenger jet, affluent travelers have purchased trunks, suitcases and bags with the coveted Louis Vuitton inscription, but as time evolved, LV expanded the range to fine apparel and jewelry, from bijouterie to luxury gems. The first piece of jewelry that was released in 2001 under the LV brand was a fashion bijou bracelet: numerous charm figures mimicked the outlines of the Eiffel Tower, an aeroplane, as well as bags and suitcases.

Louis Vuitton recently released its newest jewelry collection featuring a unique diamond cut based on one of its most iconic motifs. The collection titled, LV Diamonds, is designed by Francesca Amfitheatrof, Artistic Director of Jewelry and Watches for Louis Vuitton. It is based on the monogram flower, one of the brand’s most important symbols. The centerpiece of this collection is a new and specialized cut called the LV Monogram Star diamond, with 53 facets and pointed ends. The diamond reprises the star-shaped monogram flower created by Georges-Louis Vuitton in 1896 in a range of rings, earrings and pendants. 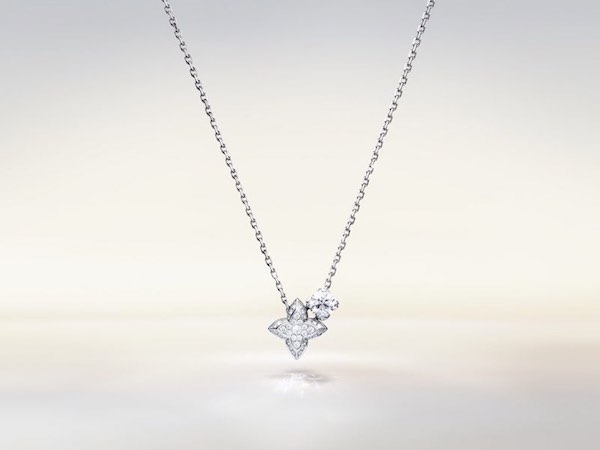 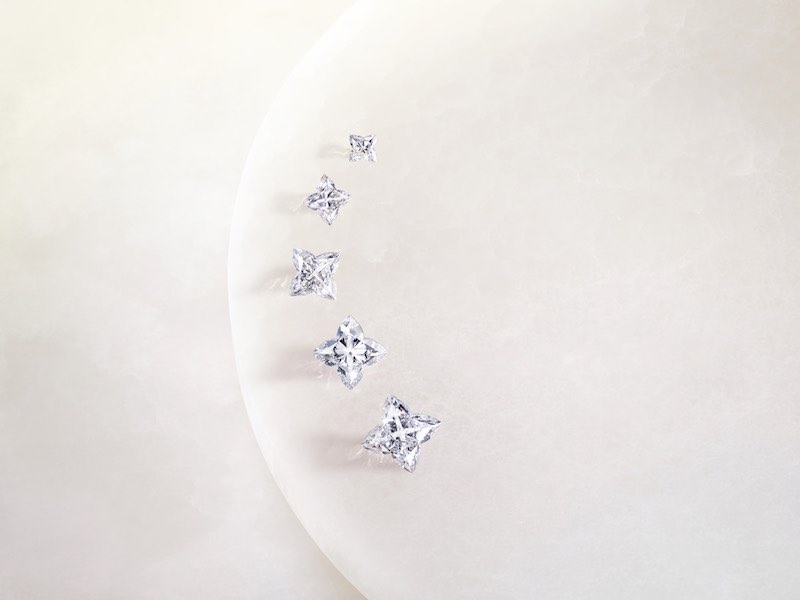 Amfitheatrof may be the best thing to happen to the maison since Virgil Abloh brought his talents to the brand, though tragically short-lived. The collection of 22 rings, unisex bands, earrings, and pendants that pays tribute to the brand’s signature aesthetic. The pieces are exclusively available at Louis Vuitton’s showrooms in New York Fifth Avenue and Los Angeles Rodeo Drive. The jewelry collection will launch internationally sometime in 2023.

Nothing endures like a beloved and true classic. Originally launched back in 2004, the now instantly recognizable Louis Vuitton Empreinte fine jewelry line has been enhanced with a series of new, unisex designs imagined by Amfitheatrof. The much-buzzed new collection, which consists of 14 pieces made from 18-karat gold and diamonds embraces clean contemporary lines with gracious fluidity and haute attitude.

Empreinte is designed with the intention to suggest the excitement of introspective exploration. The collection is well defined as one that proudly displays Louis Vuitton’s most recognizable emblems. This is the ear cuff your mother could only dream of in jest, styled alongside delicate chain necklaces, and a hypnotic selection of rings intricately designed to be layered with one another.

Louis Vuitton has been going fully steam on ultra-luxe accessories and it sure does show. Just after the French luxury house debuted a specialized diamond cut in the shape of its iconic monogram star—a instant hit for the house, it unveils bold new designs in the Empreinte fine-jewelry collection. Amfitheatrof turns her bold, probing eye to the designs, creating a collection that is pure heaven for the house’s devoted fans. Amfitheatrof places the iconic monogram flower and LV initials front and center of each piece. The collection includes several types of earrings, pendants, rings, and bracelets.

Artistic Director Francesca Amfitheatrof was born in Tokyo, trained at the Royal College of Art in London and previously held a similar position at the legendary Tiffany & Co. Impressively, she has also designed jewelry for brands such as Chanel, Fendi, Garrard and created pieces for Giorgio Armani, Eric Clapton and Prince Michael of Greece and Denmark. Her extraordinary vision is what allows Louis Vuitton’s collections to enjoy the proud status of high jewelry while still being modern and relevant today.

The house’s trunkmaking heritage also gains a subtle nod. Giving the pieces a chic edge, Amfitheatrof evokes trunk studs throughout the collection by etching their shape into polished gold. The inverted studs are another irresistible, whimsical touch. 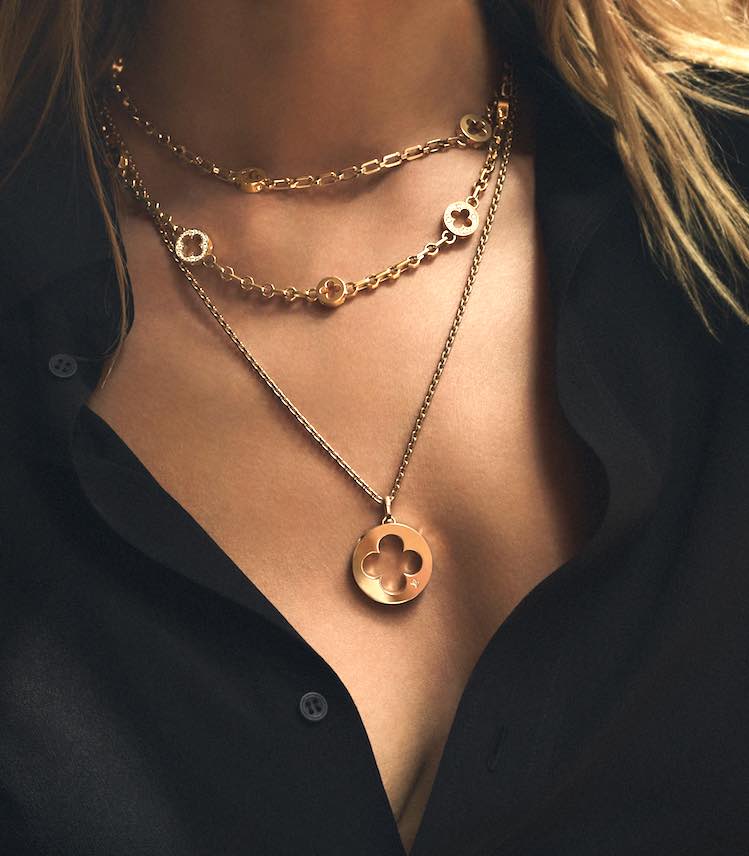 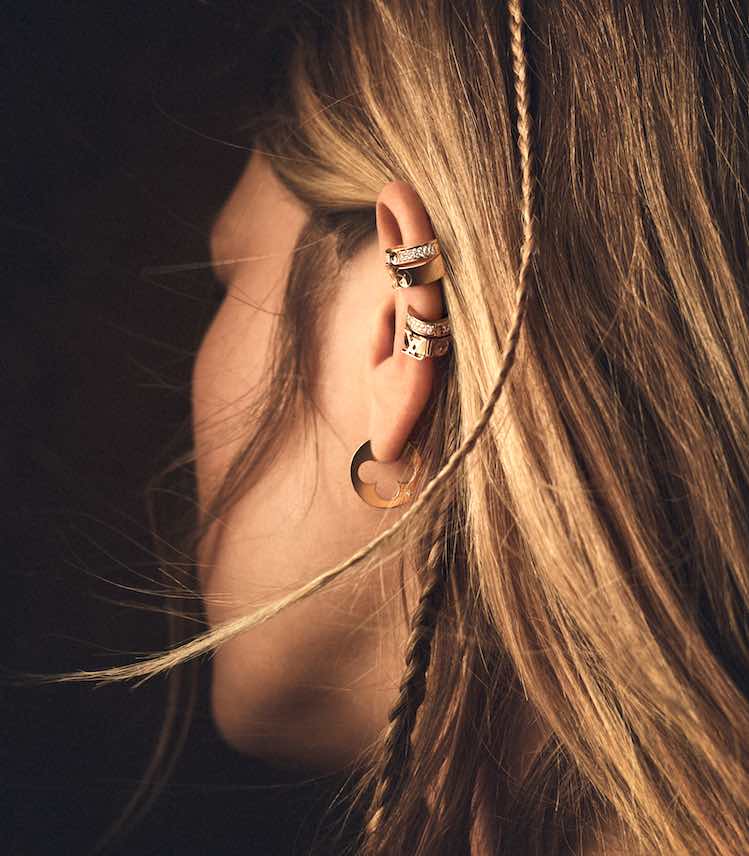 Amfitheatrof displays her elegant skillfulness in exceptional pieces that capture the essence of Louis Vuitton’s legacy. The crossed laces in rings and bracelets bear a close resemblance to the brand’s leather straps of their iconic luggage.

The Empreinte sautoir is the hero statement of the collection. It features the open-worked monogram set along gold chains. Versatile as it is kinetic, it can be worn as a long necklace, wrapped to make a shorter necklace, or even as a bracelet. The dramatic, showstopper ear cuffs are the most playful pieces in the collection. They come in pink gold with the LV monogram and diamonds. The darling famous flower makes a delightful appearance in hoop earrings. From the front, they look like classic hoops, but the side view reveals the open-worked flower wrapping around the earlobe. An endearing bracelet design elevates the trunk stud idea by featuring two interconnecting bangles: one with the inverted studs, the other with diamonds.

The pieces are designed layer, and to mix and match, giving you an eternal travel jewelry wardrobe. A simple pendant necklace worn with the sautoir wrapped as a bracelet accessorizes jeans and cashmere or daytime jaunts. By dusk, wear the sautoir as a long necklace and add hoop earrings for a statement look. 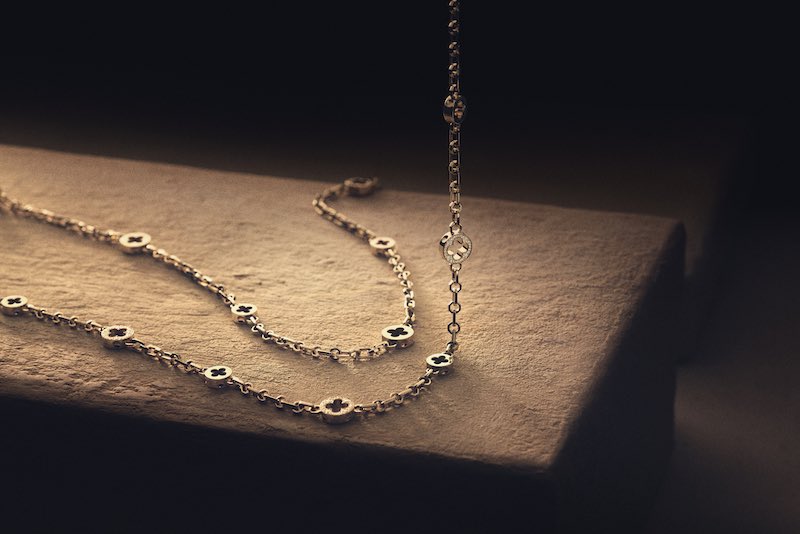 One only has to look at Louis Vuitton’s humble origin story to appreciate the hard won legacy in these new jewelry pieces. The legendary luminary was born on 4 August 1821 in the small town of Lons-le-Saunier in eastern France into a family of joiners, carpenters and farmers. His mother passed when Louis was only 10 years old, and his father died soon after. At the age of only 13, he left his father’s house alone and went on foot to Paris.

At the beginning of the 19th century, rail and water transport networks in Europe began to broaden and show true brawn. Train travel was not for the weak or weary, locomotion was a grinding business full of grit, gravel, and gravitas. Travel trunks had to be packed to the highest standards. Monsieur Marechal’s company was the best atelier of the time, and it was there that the bright and promising 16-year-old got a job. Precision matched by a meticulous eye for detail… and 17 years of painstaking work granted Louis Vuitton a reputation as the best maker of top-quality suitcases. By 1854, he opened his own workshop next to Place Vendôme in Paris with great pride.

After becoming a master of his craft, Vuitton did slow down and introduced several innovations that allowed him to crush the competition. He was the first to use canvas in the upholstery of suitcases instead of leather, making them waterproof; he and his son Georges also innovated an enhanced lock for suitcases with two springs for added security. 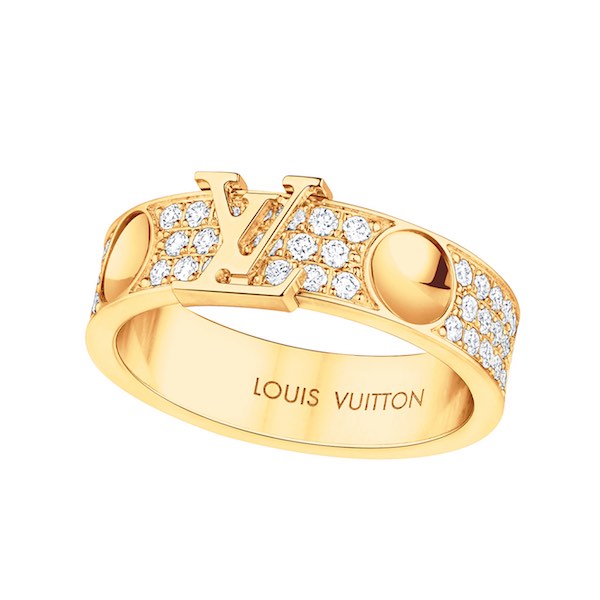 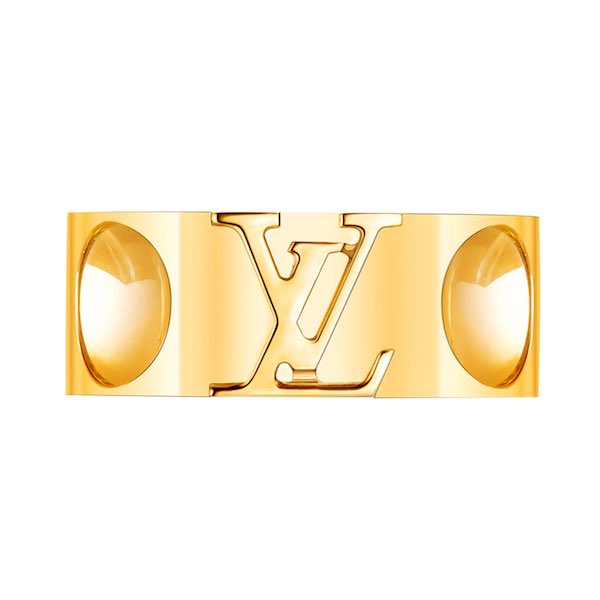 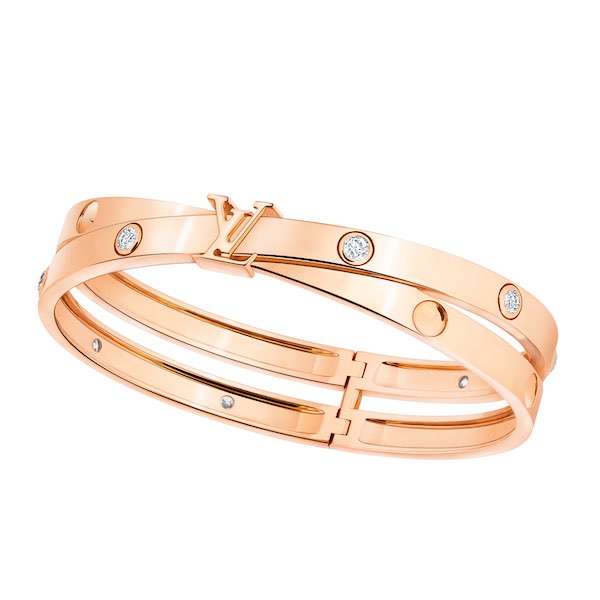 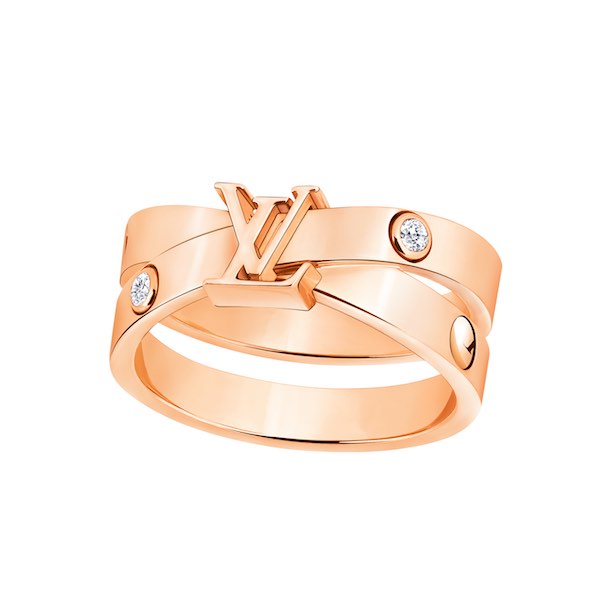 Last year’s collection by Amfitheatrof called Bravery was dedicated to the 200th anniversary of the birth of the master, Louis Vuitton. The values and integrity he laid down in building the atelier are revered by the likes of Amfitheatrof and his successors in apparel, as the very driving force and of the company’s continuing evolution.