Fit for a King: Roger Dubuis Knights of the Round Table Monotourbillon 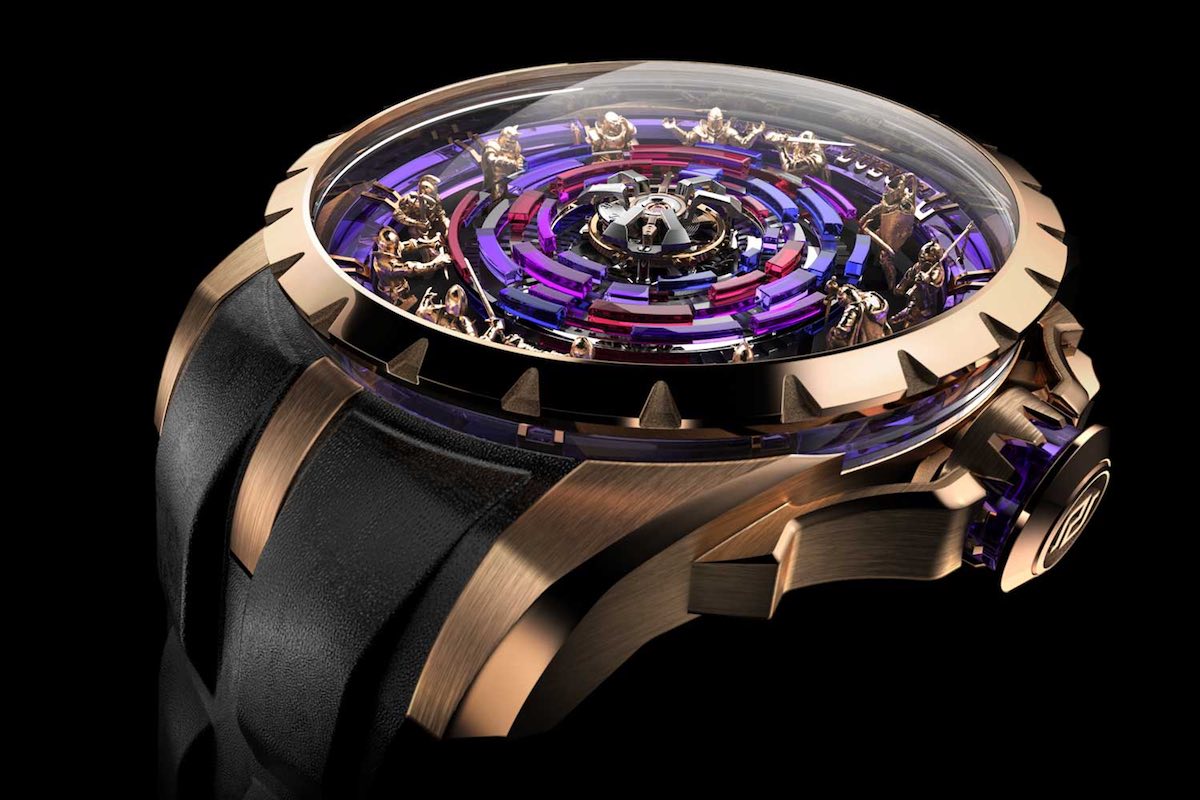 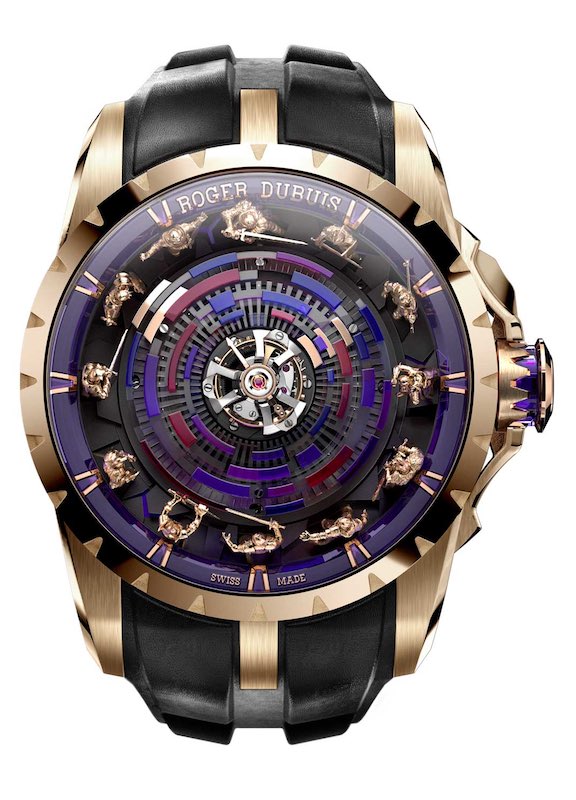 Each Twelve Knights piece is daring, and reinvents the narrative through the lens of Super Horology, creating one of Roger Dubuis’ most renowned, audacious, and stunning collections, and venturing to combine aesthetic mastery, horological workmanship, and stylishness in this manner. The valiant knights of King Arthur’s tales are armed with a secret weapon, the Monotourbillon device, the pride and joy of Roger Dubuis.

In the mythical society of King Arthur, the equalizing round table is essential. Whereas this configuration is inescapable, the master craftsmen at Roger Dubuis proved they were not afraid to accept the task of creating a model based on this concentric need. The Monotourbillon arises out from center of the watch in a dazzling display of complex mechanisms, demonstrating unrivaled technical skill.

Defending horological expertise from the threat of gravity is a challenging task for the Pink Gold 750/1000 micro-sculpted Knight soldiers with hour markers. Each knight is just 6mm in height, constructed with a distinct character and clad in armor, thin enough to fit in the clock itself yet formidable enough to convey the dedication, desire, and bravery for which Roger Dubuis is known. Such an exceptional clock requires similarly exceptional hands that have been completely merged into the unique circular watch formation. To accomplish this feat, two gold markings with flawlessly centered rotating plates were selected to indicate the minutes and hours. 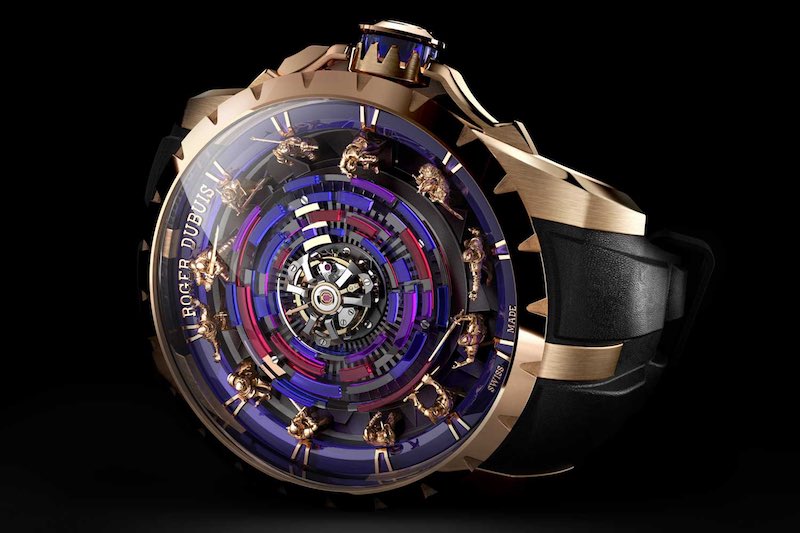 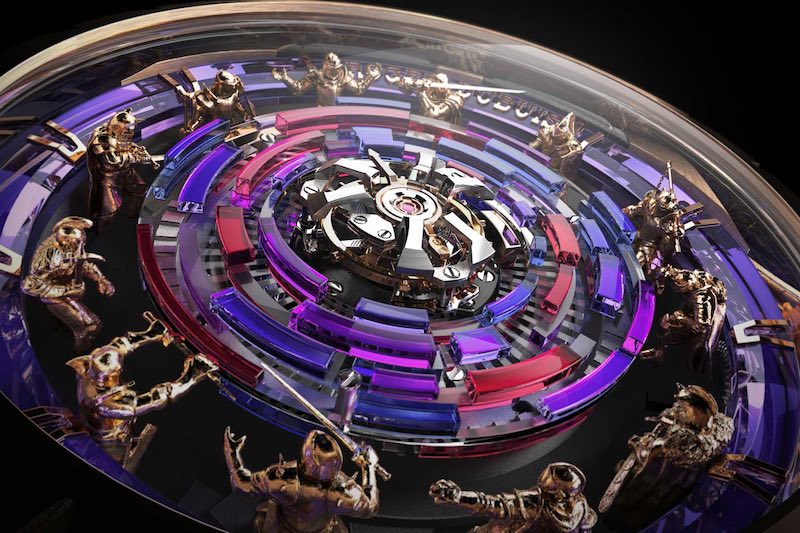 In addition, transparent violet Murano glass stones appear to float all around the Monotourbillon, and the double-sided border is cut from a singular Murano block of glass. In order to produce this appearance, no less than eight coatings of adornment had to be applied to the dial’s periphery: a wonder, considering the watch display’s limited space. Furthermore, in accordance with the design and in deference to the location of the knight at 3 o’clock, the setting mechanism has been moved to the 2 o’clock position. Once this button is pressed, a small red flag cleverly flashes to indicate that the watch has transitioned from a winding mode to a reset mode.

Today, the finest rendering of world-class watchmaking is being recreated, as boundaries are without limits and unconventional standards are embraced. There is an emphasis placed on ultra-technical watchmaking expertise and highly dramatic design. Say hello to the luxuriously unapologetic universe of Roger Dubuis, where more is better, and taking a gamble with bold initiative in the completive realm of high-end exclusive watchmaking is not only expected but perceived as mandatory. 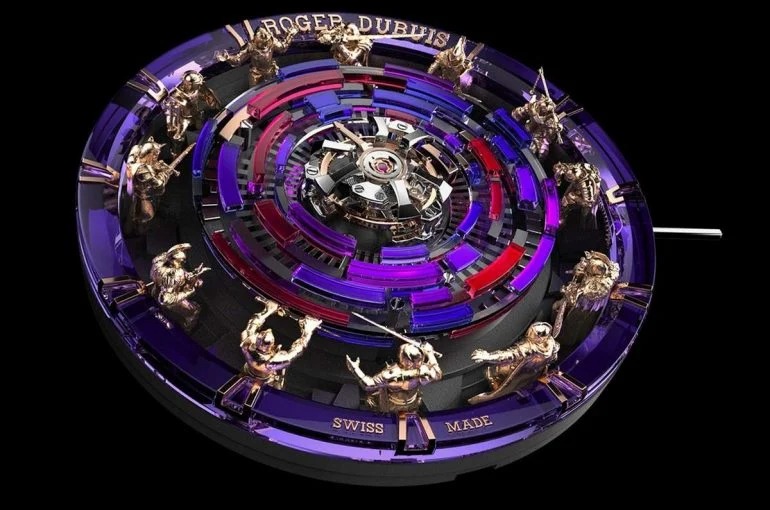 In the same way as being admitted to the round table was indeed a tremendous honor, the Poincon de Genève is amongst the most prestigious certifications in the watchmaking sector. Roger Dubuis strives to raise the bar for its artistic and specific watch-designing methodology, consistently searching for perfection and constantly pushing its own brand to leap further.

Roger Dubuis will produce exactly eight Knights of the Round Table Monotourbillon/X timepieces, and each are estimated to cost approximately $620,000.