The Return of a Legend: Live at The Iconic Waldorf Astoria New York 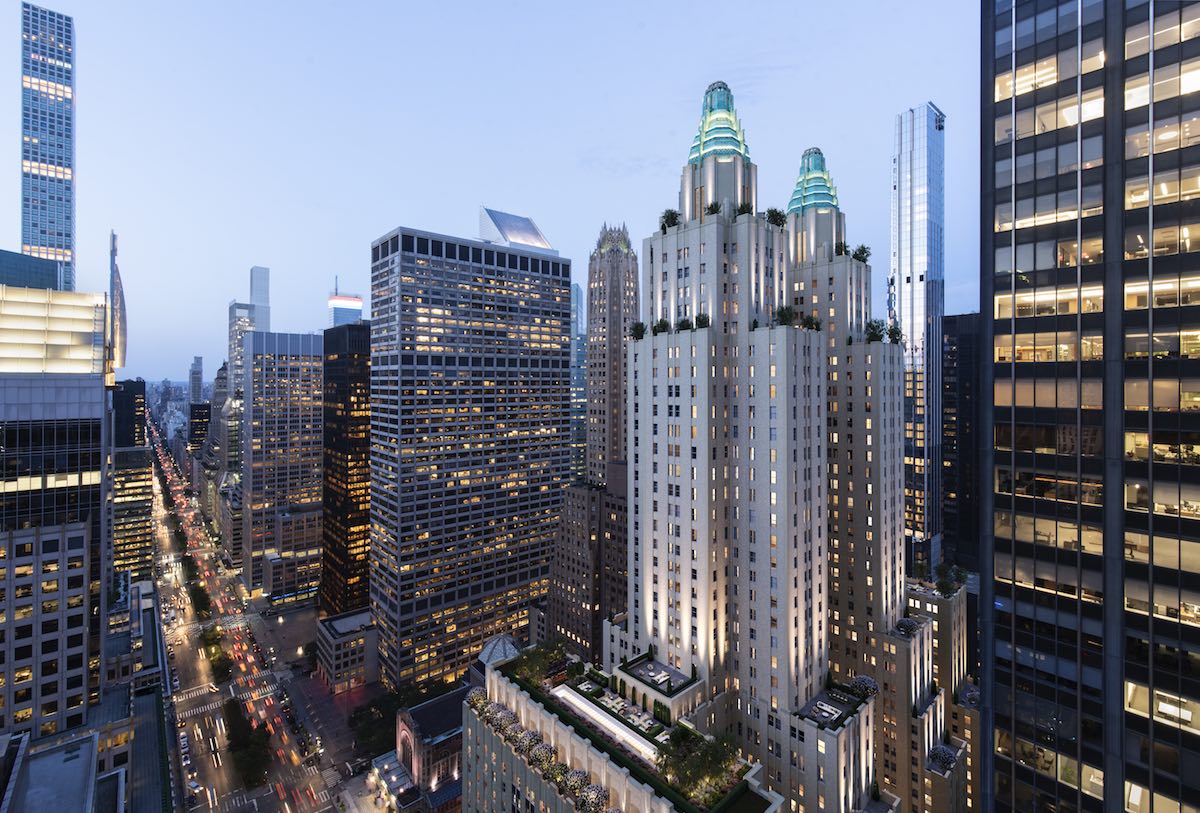 There is no more glamorous residential lifestyle in New York City than the one lived at The Towers of the Waldorf Astoria perched above the world-famous Waldorf Astoria New York hotel on Park Avenue. The historic property has been a beacon of timeless glamour for nearly a century—home to Hollywood’s elite, host to countless world leaders, and the site of famed cultural events and galas. The property is in the midst of an unprecedented restoration and is now offering the first-ever opportunity to own a residence in the historic property, living above the hotel and within the same walls as celebrities such as Elizabeth Taylor and acclaimed composer Cole Porter, every U.S. President from Hoover to Obama, and international royalty such as Queen Elizabeth II, Prince Rainier III and Grace Kelly of Monaco. 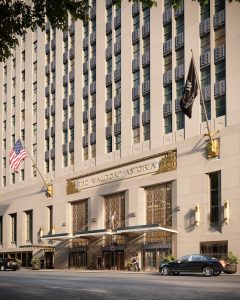 The Towers is introducing an elevated level of service to the heart of Midtown Manhattan, offering residents a world of exclusive private amenities and special access to the globally-renowned Waldorf Astoria New York, where residents will enjoy priority access to the unrivaled services of the hotel.

The Waldorf Astoria has a very rich history, both architecturally and culturally. When the Waldorf Astoria opened on Park Avenue to rapturous reviews in 1931, it was the largest and tallest hotel in the world and is currently one of New York City’s most prominent landmarks. It was also the world’s first Art Deco skyscraper hotel, and it very quickly became known as “the unofficial palace of New York.” Renowned architects Skidmore, Owings & Merrill have invested years of work to understand the building’s history to maintain its heritage for future generations, while bringing it into a new age.

The Towers of the Waldorf Astoria will feature a discrete residential experience separate from the hotel including two fully staffed entry lobbies and a porte cochère with 24-hour valet service. 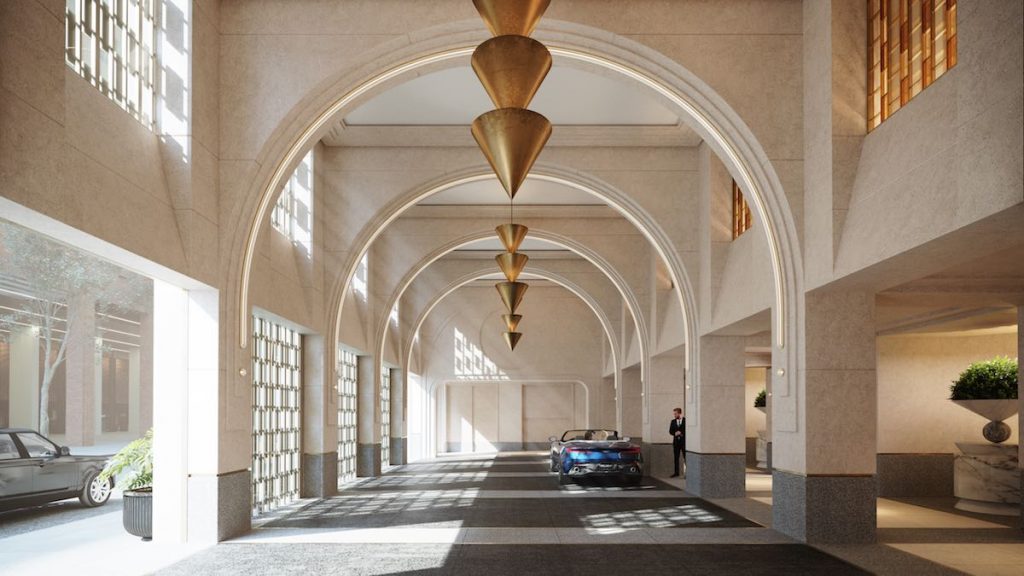 One of the most unique features at The Towers of the Waldorf Astoria is the Concierge Closet, which is integrated into the entryway of every residence. The closet is used for the secure and private delivery of packages, laundry, and room service, and is accessible from both the common corridor as well as inside of the home. A dedicated team of porters deliver and retrieve items from the Concierge Closets 24-hours a day, enabling residents the luxury of never having to stop at the building lobby to accept packages or drop off dry cleaning.

The development team recently revealed the first look into the residences at The Towers, featuring sophisticated residential interiors by internationally renowned designer Jean-Louis Deniot that create a truly modern experience within the building’s historic framework. 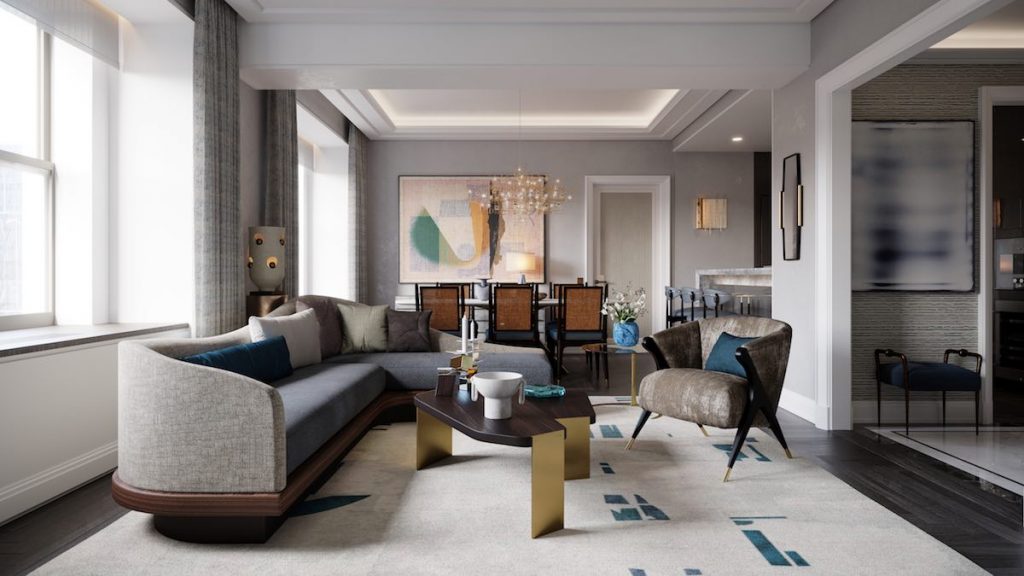 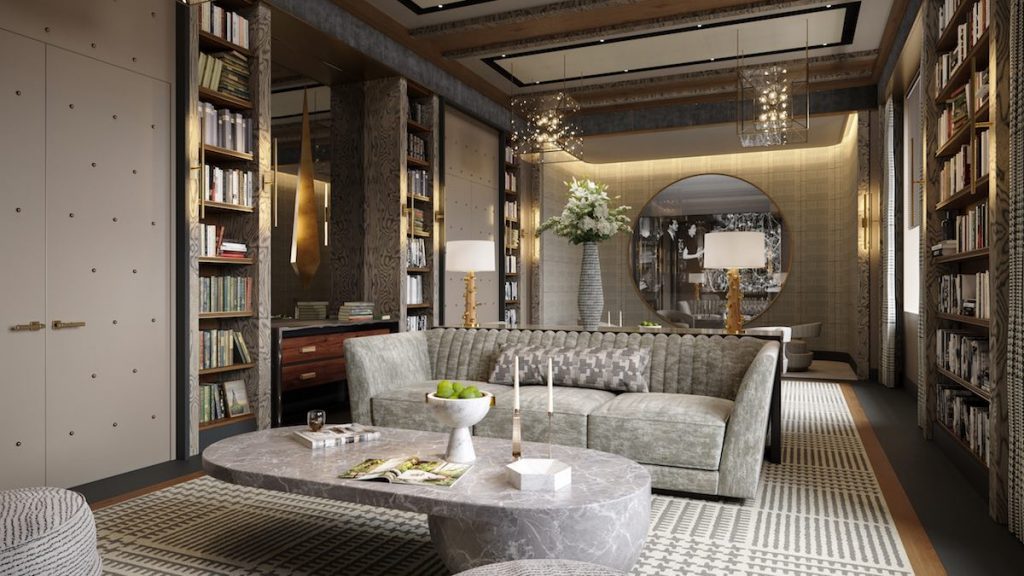 The wide variety of residences range from gracious studios to opulent four-bedrooms and magnificent penthouses, many with unique floorplans, and several marquee residences with expansive private outdoor spaces. Approximately 10-foot ceiling heights are typical throughout The Towers, with select residences on upper floors featuring heights of up to thirteen feet. Every residence has been outfitted with all new windows that feature modern sound-attenuating technology while bringing back the 1931 design, and herringbone floors with a custom cerused finish are laid throughout the homes. 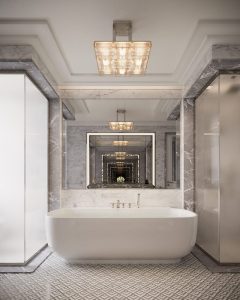 Deniot carefully considered each detail, designing his own custom creations for The Towers that include kitchens featuring cabinetry manufactured in Italy by Molteni&C and a polished Quartzite backsplash and countertop, as well as an integrated suite of Gaggenau appliances, all fully vented to the outside. The primary bathrooms feature honed white Mont Blanc marble slab walls and a radiant-heated custom mosaic marble tile floor in a Waldorf Astoria-inspired motif, with a beveled marble vanity and numerous custom fixtures.

Residents and their guests will have access to over 50,000 square feet (4,645 SQM) of private residential amenities, ranging from health and wellness to entertaining and business. These spaces will include the stunning 25-meter Starlight Pool with skylight, state-of-the-art fitness center, opulent private spas for men and women, and numerous spaces to host private events. Residents will also have access to the Waldorf Astoria New York hotel, with over 100,000 square feet of amenities, including the hotel’s iconic heritage spaces, spa, restaurants, and bars. The sheer scale of lifestyle offerings, services and amenities at the property will provide residents an experience that no other New York residential building can hope to match. 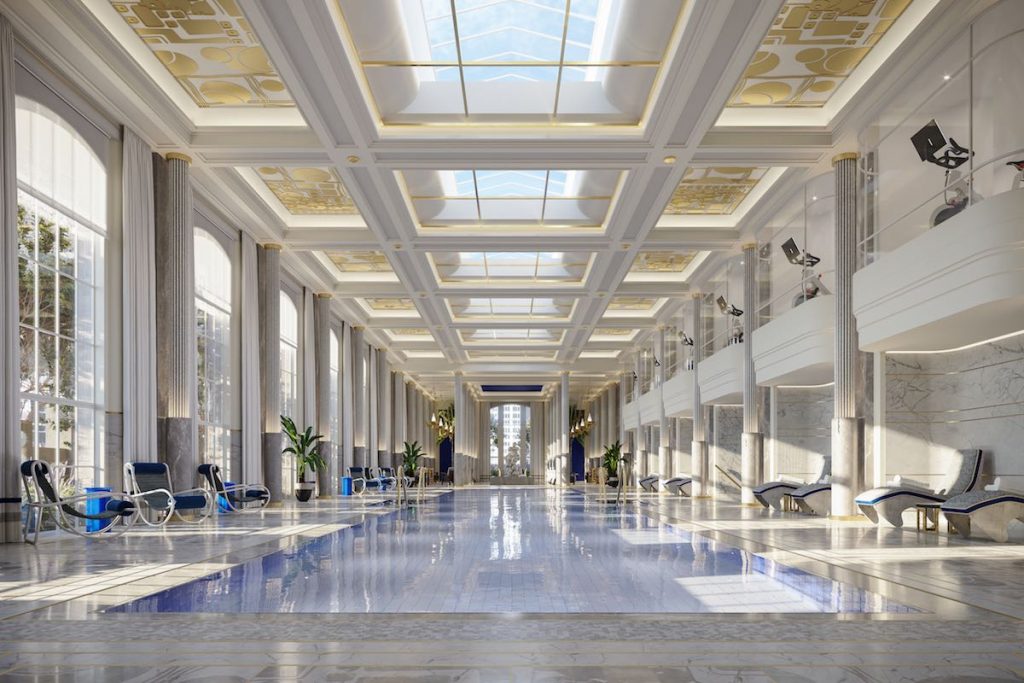 When designing the private residential amenities, Jean-Louis Deniot wanted to create something that had never existed before at the Waldorf Astoria: a pool. He found inspiration in a 1930s Art Deco Japanese Kimono with abstract flowers for the ceiling grill design and the floor mosaic around the pool.. The columns are clad with fluted Raku ceramics, a Japanese enameled tiling technique, which gives the impression as though you are swimming in a ballroom. The Starlight Pool is located in the same space within the Waldorf Astoria as the iconic Starlight Roof once was. A 6,000-square foot aerie with 19-foot ceilings, the Starlight Roof was the place to be in the 1930s and 40s. It was the nightclub of choice for elite New Yorkers, hosting luminaries such as Ella Fitzgerald, Count Basie, Benny Goodman, and in later years Cole Porter and Frank Sinatra.

Adjacent to the 25-meter Starlight Pool is the verdantly-adorned Winter Garden, a stunning bar and lounge with soaring canopic ceilings, filled with lush plants where residents can relax and entertain. The Presidential Library is a nod to Waldorf Astoria’s history with U.S. Presidents, as every President from Herbert Hoover to Barack Obama stayed in the hotel; Herbert Hoover lived there for about 30 years after his presidency, and Dwight D. Eisenhower and Harry S. Truman also lived at the Waldorf as permanent residents. The space will feature an adjacent bar and a specially curated library. 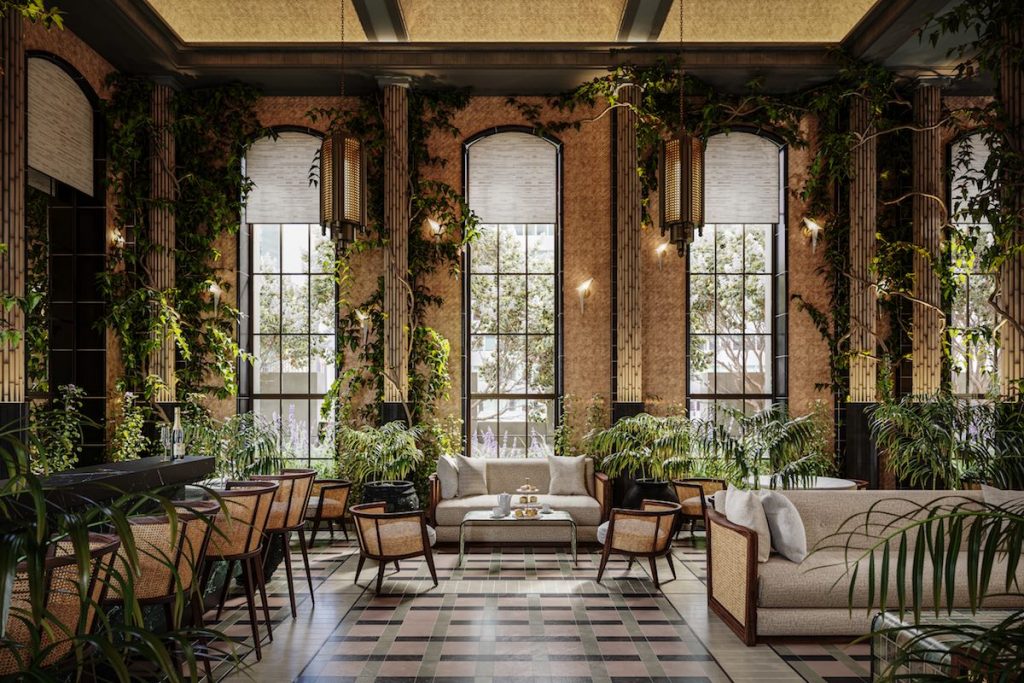 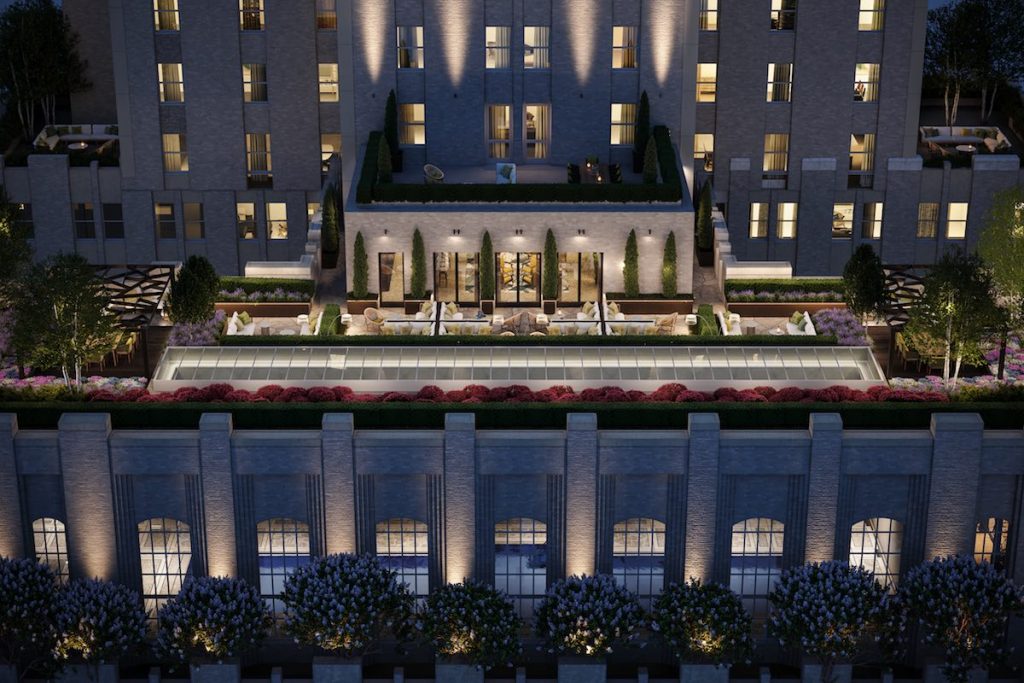 Additional private residential amenities at The Towers comprise of four residential bars including the Starlight Lounge, featuring a bar and catering facilities which opens onto the lush Starlight Terrace overlooking Park Avenue from the 27th floor. Multiple elegant entertaining spaces, fully supported by adjoining catering facilities, include The Grand Salon, with high arched ceilings and windows on all sides, beautifully designed for private functions; The Chrysler Room, providing group dining and private dining rooms, serviced by either the hotel or a resident’s own selection of staff; and a Demonstration Kitchen with counter seating. Residents can entertain at the Cue Club, which includes two 9-foot US billiard tables and one standard size snooker table, and the Monte Carlo Gaming Room with four game tables and integrated banquette seating. Residents can organize a private concert at the Stage & Screen Theater with a performance stage, green room, grand piano, and movie screen. For the most luxurious private workspaces available in New York City, The Empire Club includes reception facilities, a board room, separate meeting rooms, private offices, and co-working spaces for residents’ corporate activities and events. 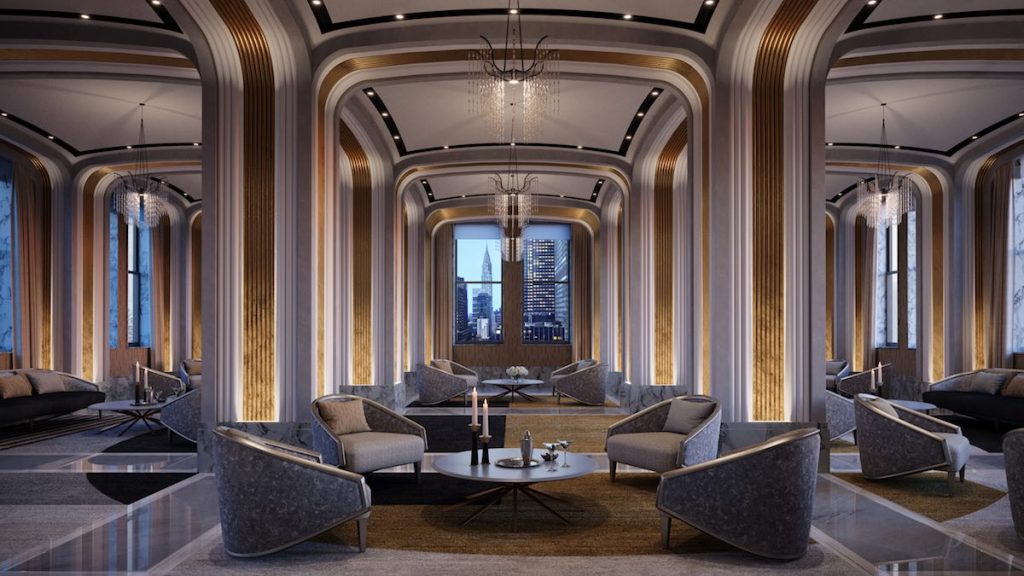 “When you have been asked to add your own touch to something as iconic as the Waldorf, you have to be careful to ensure that every single element serves and respects the history and heritage of the building,” concludes Jean-Louis Deniot. “Your work has to complement the existing foundations of the building. Every single design decision must be justified; everything must be in tune.”

Big thanks to our friends at McLaren Automotive – The Official Page for letting us spend some time with the 2021 McLaren 720S Spider. Read all about it in our next issue! #mclarenmonday #mclaren720s #supercar #jetset ... See MoreSee Less