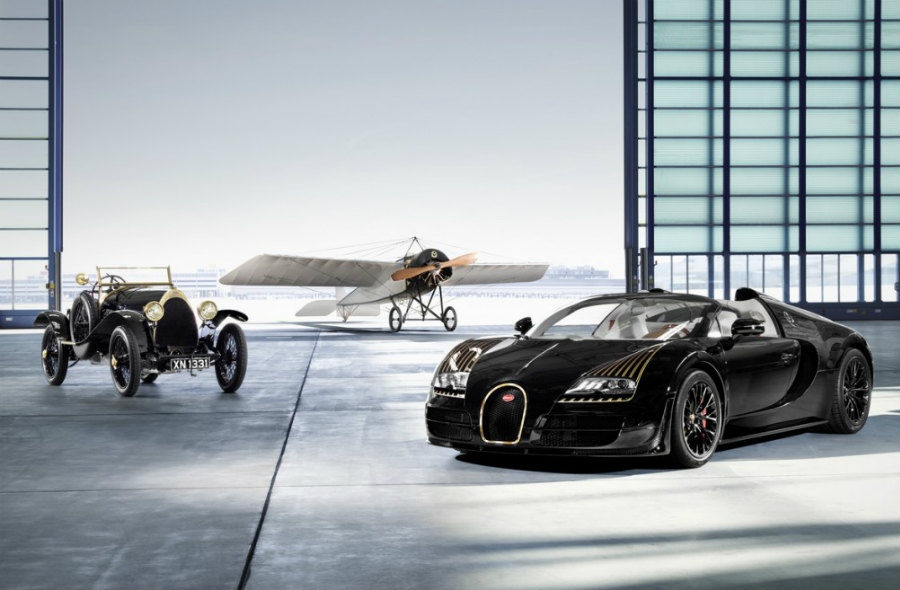 With its fifth model in the six-part “Les Légendes de Bugatti” (Bugatti Legends) Edition, Bugatti has revived the legendary Type 18 “Black Bess”, which went down in automotive history as one of the first ever street legal super sports cars.

At the upcoming Auto China motor show in Beijing (from 21 to 29 April) the French luxury manufacturer will be presenting as a world premiere the modern interpretation of the Type 18, the Veyron 16.4 Grand Sport Vitesse1 “Black Bess”. As one of the fastest road vehicles in the world at the time, the Type 18 “Black Bess” is a direct forerunner of today’s world speed record-holding Bugatti Veyron. As with all models in the Edition, the current Legends model is limited to a run of three vehicles and is available for a net price of € 2.15 million. Of the four Legend models already presented, all twelve vehicles have been sold.

“Over the course of its history, Bugatti has not only been responsible for crafting enormously successful race cars, but has also created some outstanding road vehicles,” notes Dr Wolfgang Schreiber, President of Bugatti Automobiles S.A.S. “As the fastest road vehicle of its time, the Type 18 was in a class of its own. It truly is the legitimate forerunner for the Veyron, and is therefore a Bugatti Legend.”

The Type 18 was one of the most important Bugattis of the pre-war era, both ahead of its time and in a league of its own thanks to its impressive technical features. With a 4-cylinder in-line engine and five litre capacity, the vehicle was capable of producing over 100 PS. With a top speed of 160 km/h (100 mph), a feat deemed virtually unbelievable for the times, the Type 18 was a true racing thoroughbred and the fastest road vehicle around.

The Type 18 was driven in races by company founder Ettore Bugatti himself; indeed he secured a win in his class in the important 1912 Mont Ventoux hill climb. Bugatti limited the production run for this model to just seven vehicles and sold them to an extremely select group of customers. One of these customers was the famed and celebrated French aviation pioneer Roland Garros, who successfully crossed the Mediterranean in an airplane in 1912 after racking up a host of successes at a variety of aviation events. It was Ettore’s victory at Mont Ventoux which drew Garros’ attention to the Type 18. A lover of speed through and through, Garros was looking for a car which would enable him to travel as fast on land as he could in the air. The Type 18 was an obvious choice. In counting Garros amongst his customers, Ettore Bugatti had landed a major marketing coup.

Bugatti delivered the two-seater bearing the vehicle identification number 474 to Garros on 18 September 1913. This Type 18, later named after the English racehorse “Black Bess”, is one of only three of the seven vehicles still remaining. Today, it can be found in the Louwman Museum, a private collection on show at The Hague in the Netherlands. Evert Louwman has kindly made the historic Type 18 “Black Bess” specially available for the world premiere of the current “Black Bess” Legend Vitesse at the Auto China in Beijing.

“The ’Black Bess’ Legend Vitesse is yet another fine example of Bugatti’s innovative power when it comes to creating exclusive automobiles,” explains Bugatti Head Designer, Achim Anscheidt. “We have developed a new process for individually hand-painting the leather in the vehicle’s interior, the like of which has never been used before in the automotive industry. The leather and the ink applied by the designer have been technically developed and processed so that they can withstand the stresses inside the vehicle and fulfil the valid quality requirements demanded by modern day production.

The body of the “Black Bess” Vitesse is constructed entirely of carbon fibre and, just like its historical predecessor, is painted completely black. The gold-coloured accents that make the Type 18 “Black Bess” so unmistakable are reflected in exquisite fashion on the modern Bugatti. For example, some of the Bugatti’s body components are coated in 24-carat gold. Indeed, this precious material has been used for the striking Bugatti horseshoe, which gleams against the background of the black front grille, creating a truly expressive front view for the Vitesse. This is reinforced by gold-coloured stripes that start below the headlights and radiate out over the front wings towards the rear, before tapering off at the end of the door line.

Sporting a similarly brilliant gold finish are the EB logo on the rear of the vehicle and the hub covers on the black rims, which also bear the initials of the company’s founder, Ettore Bugatti, in black. And let’s not forget the tank and oil caps, which have been engraved with the “Black Bess” nameplate and elegantly finished with gold paint.

The interior of the “Black Bess” Legend Vitesse has been fully upholstered using the finest leather. The headliner, footwell, seats, elongated centre console and rear bulkhead are bedecked in a light “Beige” tone, with the dashboard, dash panel, door trim panel and cowl panel offering a discreet contrast in ”Havanna”. Clad in red “Crimson” leather, the steering wheel rim draws a clear reference to the historic Type 18 “Black Bess”. This accent has also been picked up and continued in the red decorative stitching on the outer bolsters of the seats and in the seat belts.

The door panels are without doubt one of the car’s most impressive details. This is actually one of the most daring projects in the design of the vehicle’s interior. Both panels are upholstered in “Havanna” leather and bear scenes which depict the historic Type 18 “Black Bess” as well as Roland Garros’ airplane, a Morane Saulnier Type H. These sketches have been hand-painted directly onto the leather – just as the components in luxury vehicles were hand-painted in the early 1920s. In order to protect the images from abrasion and environmental impacts, both a special new ink and a new impregnation process have been developed. Never in the field of automobile manufacturing have traditional details been implemented so perfectly whilst also upholding the demands placed on quality by modern production standards. This reconfirms Bugatti’s strength in innovation. And it is coupled with a strong focus on individuality, as none of the six door panels in the three Legend vehicles is identical.

The demands placed by Bugatti on handling refined materials and on maximum faithfulness to the original vehicles can also be seen in the use of high-quality rosewood for the selector lever and the centre console panel in the vehicle’s interior. Gold can also be found inside the vehicle itself, such as the EB logo on the cover of the rear storage compartment, which is also finished in beige leather and hand-painted with a motif showing the historic vehicle.

Of course, typical Legend features have also been included in the vehicle, namely the beige, leather-clad insert in the centre console extension which bears the “Les Légendes de Bugatti” nameplate, the relief of the dancing elephant (the symbol for the Legends Edition which has been refined with a gold finish for this model), and the door sills bearing the image of the Type 18 “Black Bess”.

The Bugatti Type 18 was manufactured from 1912 to 1914. At its heart was an impressive 5 litre, 4-cylinder in-line engine with 100 mm bore and 160 mm stroke, a crankshaft mounted on three bearings and an overhead camshaft. New for Bugatti: this design was fitted with a chain drive. It sported three valves per cylinder; two small intake valves and a large outlet valve. The extremely lightweight and small gearbox offered four forward gears and a reverse gear. The 2.45 m wheelbase and 1.25 m track width ensured the 100 PS vehicle’s exceptional manoeuvrability, particularly when cornering.

Auto China Beijing 2014 takes place from 21 to 29 April in the China International Exhibition Centre in Beijing. 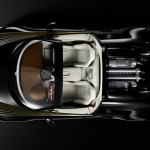 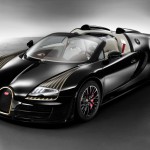 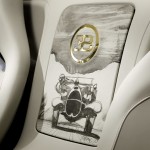 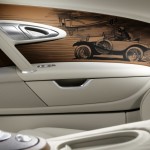 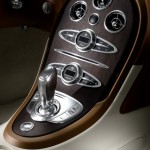 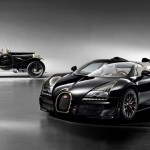 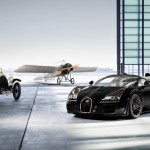