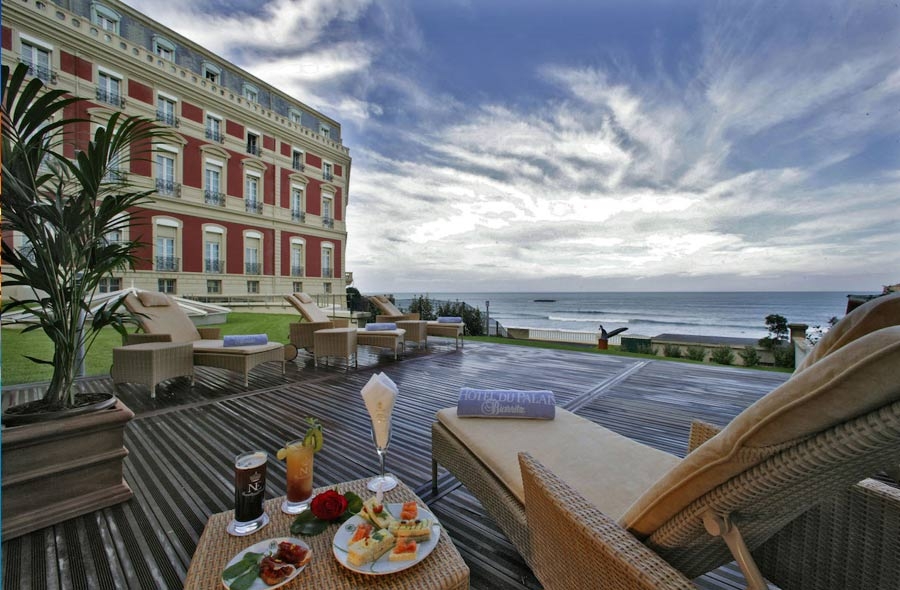 Emperor Napoléon III and the Empress Eugénie de Montijo fell in love with the area in 1855 and the Emperor decided to build the Villa Eugénie to serve as their summer villa.

Now, more than 150 years later, the Hôtel du Palais is one of the most outstanding hotels in the world. Of course, the original Villa Eugénie received a lot of upgrades since its original construction, and the Hôtel du Palais has been a landmark in Biarritz for 120 years.

Featured in multiple movies such as the 1957 film The Sun Also Rises, an adaptation of the Ernest Hemingway novel of the same name directed by Henry King, the iconic Hôtel du Palais is now part of the Orient-Express Associate Hotels program.

After just a one-hour flight from Paris to the Biarritz airport, I immediately fell in love with this city of the southwest. A five-minute drive later, I arrived at the Grande Plage, the largest beach in the city of Biarritz. From the end of the beach, the Hôtel du Palais building looks like a massive castle, a place that you can only see in the history books. This epic hotel that is now owned by the City of Biarritz and managed by Jean-Louis Leimbacher and Jeanne Marchetti, is not only one of the most luxurious hotels in the southwest of France, but one of only thirteen of the very best five-star hotels in France that have been awarded the distinction of “palace.”

Most of the 153 guest rooms, which include 30 suites, are equipped with Second Empire furniture. The majority of the rooms and suites have stunning views of the ocean or the famous California-style swimming pool that looks like an extension of the ocean and has seen, over the years, hundreds of celebrities, kings, emperors, dukes, presidents and other international politicians sip a glass of Bordeaux wine or a local cocktail while lounging on the legendary chairs.

The four Royal Suites are apartments named after Eduard VII, Alphonse XIII, Sarah Bernhardt and Winston Churchill. The suites’ refined styles, nobly elegant, offer a vision of a certain luxury “à la Française.” Among the noble and precious materials used in these suites, you can observe teak from Burma, Carrara marble and Italian paste mosaics.

The fifth floor, which has been entirely converted into an old transatlantic ocean liner corridor, is where my “Hemingway” suite was located. It featured antique marine furniture and personal objects that were once used by Ernest Hemingway himself when he lived at the hotel. The windows of the room were portholes, and the views of the Atlantic Ocean and the Biarritz Grande Plage were absolutely beyond this world.

The breakfast buffet, which features local products and specialties, is set every day in the impressive “La Rotonde” salon with its high ceilings, impressive columns and unique Napoleon III-style furniture. The salon directly faces the ocean behind giant antique glass windows. Of course, the hotel features three places to lunch and dine in, including the Michelin Guide one-starred restaurant “Villa Eugénie” where Master Chef Jean-Marie Gautier and his brigade put the spotlight on remarkable local products and fresh seafood.

One of the features that gave this incredible hotel its status of being a palace hotel is its spa. The five-story, 32,000 square foot, award-winning Imperial Spa Guerlain is a haven of peace, a unique space dedicated to personal fulfilment, physical health, beauty and well-being. 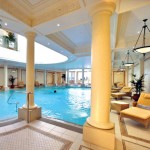 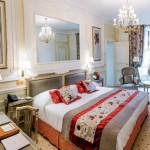 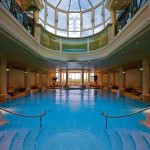 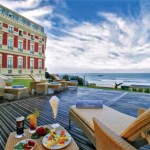