One Traveler Discovers Florence Italy | Is a Masterpiece Among Masterpieces 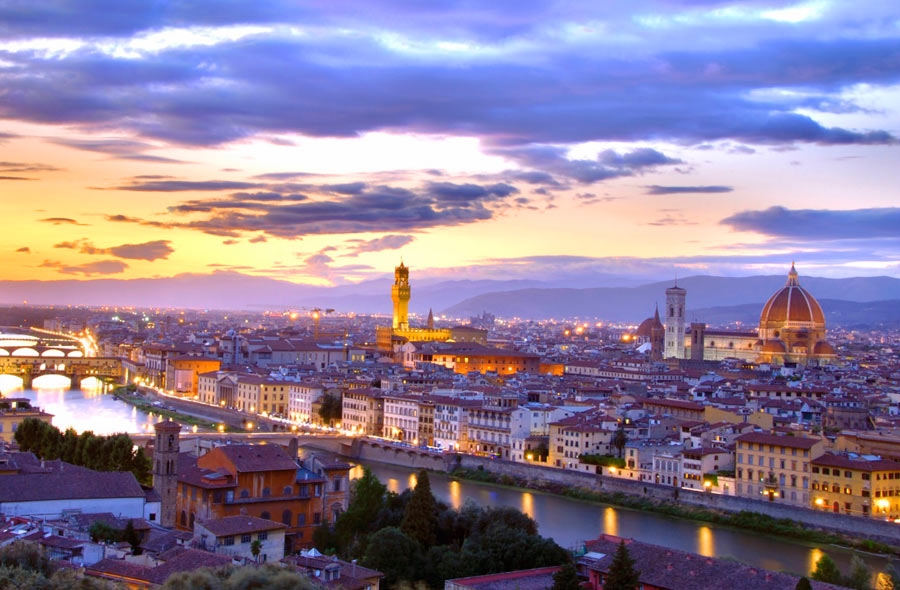 It’s not much of an exaggeration to say one might throw a rock in any direction in Florence and hit something of significance.

As I learned on my recent maiden voyage into the heart of Tuscany, the city practically oozes culture from every surface.

Dubbed “the cradle of the Renaissance,” people associate Florence with its rich history, no-detail-spared architecture and world-class collections of art. A staggering 1.5 million call the cozy metro area home, and just about as many visitors arrive each year to take in the city’s wealth of sights, plus Tuscany’s gently sloping hillsides, the serene River Arno, fine chianti and rustic Italian fare. Hollywood, too, can’t seem to get enough of la dolce vita in and around Florence, as the movies Under the Tuscan Sun, The English Patient, Gladiator and Tea With Mussolini were all filmed, at least in part, with the Tuscan terrain as their backdrop. Gladiator director Ridley Scott reportedly has his very own villa tucked away among the sunflower fields and vineyards.

Even during the span of my 15-minute ride from the Firenze airport into the city I began to see how a person might come here and then never want to leave. A feast of sights began to jump out at me, including the colossal military fortification Fortezza da Basso; the ultra-ornate basilica of Santa Maria Novella; and the Farmaceutica di Santa Maria Novella, a pharmacy that’s been in business since the 1200s. By the time my driver deposited me at The Westin Excelsior – Firenze (located across the street from Amerigo Vespucci’s former family home), I was more than ready to jump from the vehicle and begin my weeklong Florentine adventure.

When visiting, be prepared to log significant time on foot. Cars aren’t allowed in certain areas, and although renting a Vespa sounds like a fun tribute to Gregory Peck and Audrey Hepburn a la Roman Holiday, it’s often unclear to everyone but the Polizia where scooters may or may not go — not to mention, everything you’ve heard about trying to navigate traffic in Italy is true. The most practical way to get around, then, walking can also be the most torturous if you visit during the hot and humid summer months (June through August), as I did. But despite the heat, I was determined to get up close and personal with as many of Florence’s icons as I could.

Fortunately, getting a feel for the city is a cinch with so many distinct features to serve as memory triggers. That said, there are a few helpful keys. First, familiarize yourself with Florence’s seven neighborhoods, especially the central one, called the Duomo, which surrounds the hard-to-miss cathedral and contains a majority of the most famous spectacles. The other neighborhoods, most named after their churches, fan out from there — Santa Maria Novella, San Lorenzo, San Marco, Santa Croce and San Miniato al Monte. Many Florentines reside in the neighborhood across the river, called the Oltrarno (literally, “the other side of the Arno”) so as to avoid the tourist-filled “golden triangle” stretching from the Galleria dell’ Accademia to Ponte Vecchio to Santa Croce.

A good secondary guide is the River Arno, which cuts through the lower half of Florence from the northwest to the southeast. I followed it one day from the Westin Excelsior on Piazza d’Ognissanti toward Ponte Santa Trinita, a celebrated bridge consisting of three supremely elegant arches. Stand here and look east for a picturesque view of its more famous neighbor: The city’s oldest bridge, the iconic Ponte Vecchio was the only Florentine bridge spared during World War II and is now crowded with multilevel jewelry boutiques, street artists and shoppers. I found the walkway made for exciting browsing, but bargains were scarce due to the spot’s popularity.

Cheaper instant gratification can be found on the north side of Ponte Vecchio, however, it’s of the gastronomical variety. Here, and elsewhere throughout Florence, the gelaterias infuse the air with scents of sugar and fruit, making the city a dream for those with a sweet tooth, or a nightmare for those on a diet. The traditional stracciatella gelato — vanilla and chocolate — is a must-try, and I took mine to go as I checked out the boutiques’ window displays.

Florentines have crafted valuable wares by hand for generations, solidifying the city’s reputation as a shopaholic’s paradise. In general, good buys include art, silver, leather goods, handmade jewelry, ceramics, home furnishings, wine, olive oil and apparel (recognize the names of homegrown talents Roberto Cavalli, Salvatore Ferragamo and Guccio Gucci?). Whatever your desire, ask your concierge for a list of reputable dealers, or to recommend good areas for browsing. For example, in the Oltrarno, I watched artisans handcrafting custom furnishings and jewelry, and in the leather market just north of the cathedral I found vendors selling a variety of handmade handbags, belts, wallets and shoes. (See the sidebar for shopping guide.)