Lotus Evija: Ushering in a New Era of Automotive Ingenuity 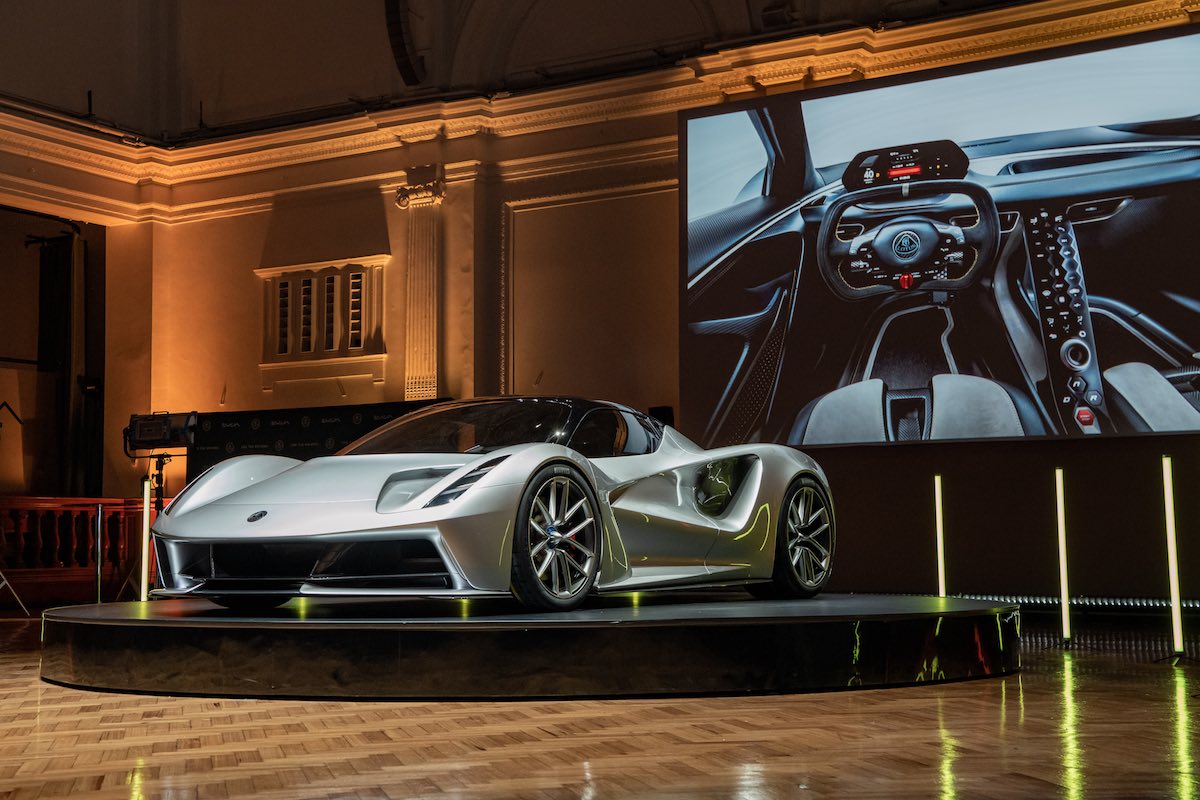 From its humble beginnings in Colin Chapman’s small family garage, to the brand’s iconic mid-engine Esprit model of the 70’s and 80’s, Lotus Cars is a household name in the automotive world. For the past 70 years, the British automaker’s core principles and coveted racing history have guided development of the brand’s ever-evolving product line. Yet in the modern supercar era, Lotus hasn’t been a significant part of the conversation – until now. Enter the world’s most powerful production car: the Lotus Evija. 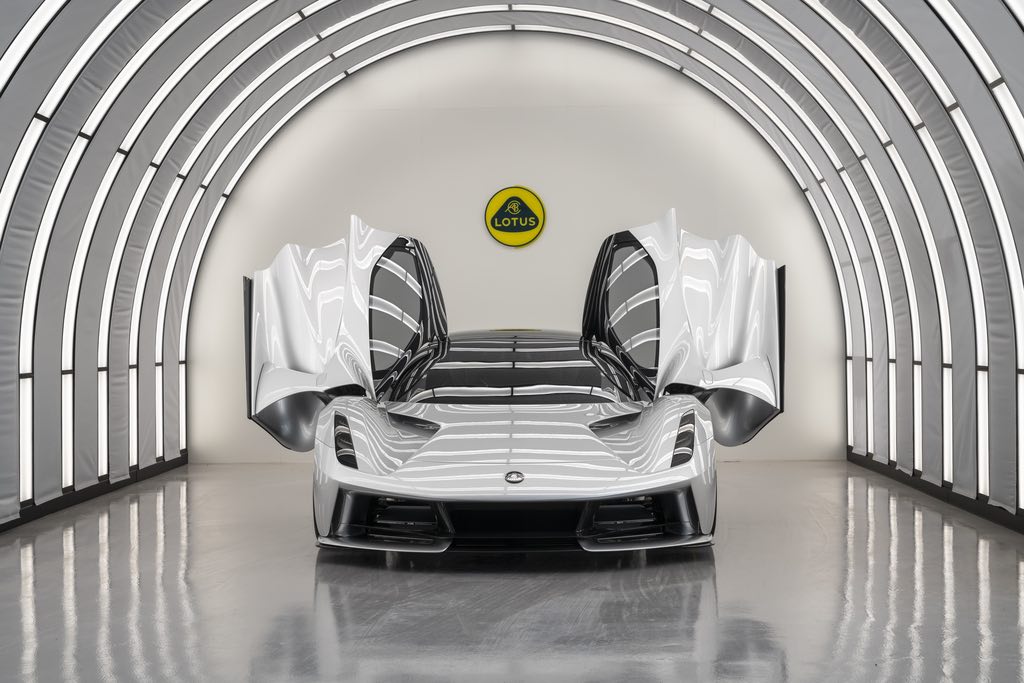 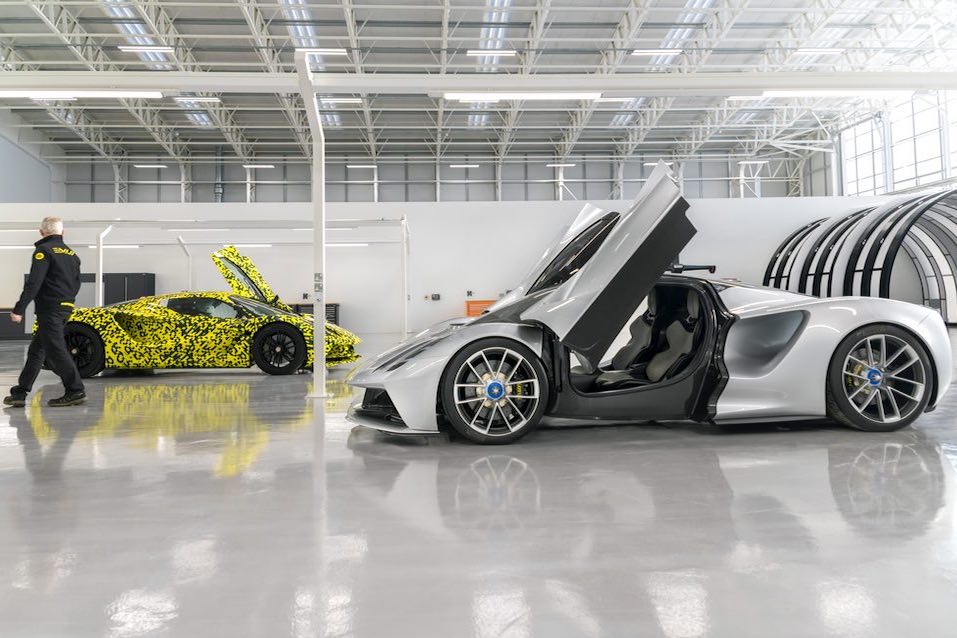 Intended as a halo product for the future of Lotus, the Evija (meaning “the first in existence”) is jam-packed with cutting-edge technologies and industry firsts. Earlier this year we spoke with the CEO of Lotus Cars, Phil Popham, to gain an inside look at what inspired the new model and how the Evija is helping redefine the future of the coveted marque. 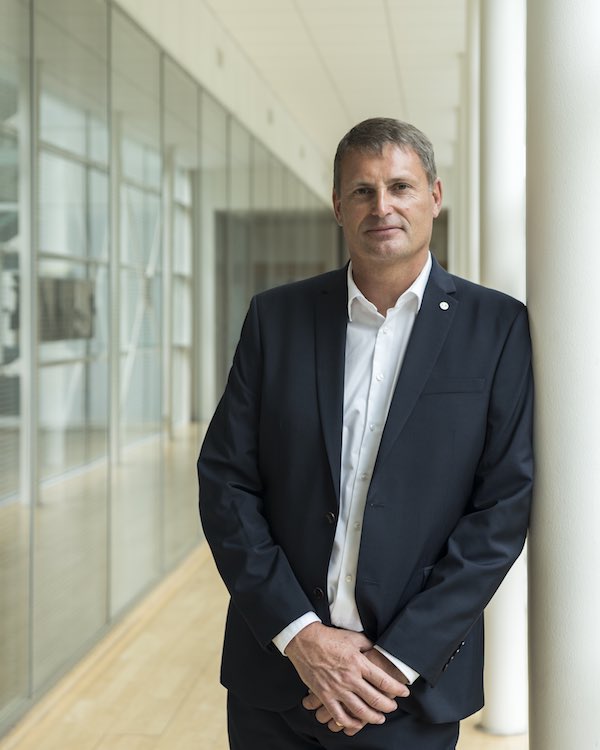 Popham, who spent the bulk of his career working for another famed British automaker, admits he was initially hesitant to make the switch to a new brand. Lotus, like many in auto manufacturing, had seen its fair share of ups and downs throughout the years, changing ownership several times before finding a new home with its current parent company, multinational conglomerate Geely Group. Popham says it was a visit to China to meet with the board that convinced him the chance to revive the Lotus brand was simply too good to pass up.

After joining Lotus in 2018, Popham embarked on his first major initiative: creating a signature statement piece that would remind the public of the brand’s capabilities. Thanks to Geely’s renewed investment in the brand, Popham added 250 engineers to his team and set out to create the most powerful road-legal production car ever made. In discussing the project, Popham said “We would have never been able to embark on such an ambitious plan without first [Geely’s] investment, but then secondly their broad scope of resource and capability that we can tap into beyond our own.”

From its early days in Formula One racing through to its current product line, Lotus Cars has stayed true to its three core design pillars: weight, aero, and chassis dynamics. They’re the driving force behind every model produced by the famed British automaker, and the Evija is no different. 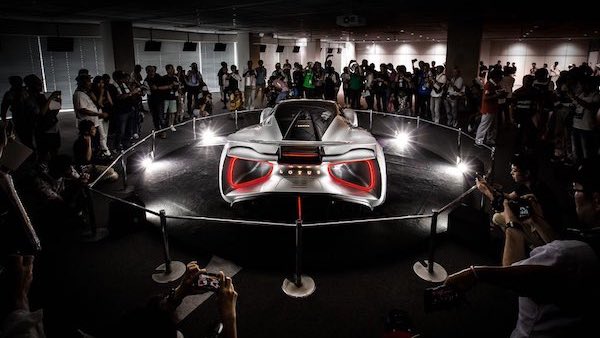 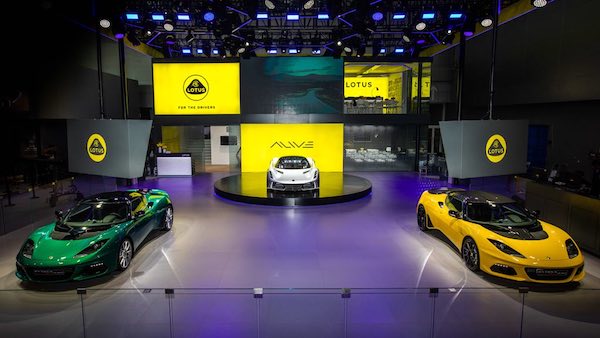 The Evija is equal parts exotic hypercar and jaw-dropping work-of-art. The world’s most powerful EV features the longest piece of carbon fiber ever used in a production car to create the vehicle’s ultra-lightweight monocoque, perhaps in an unintentional ode to the brand’s storied racing history. Powered by four torque-vectoring enabled electric motors, one at each wheel, the Evija produces a staggering 1,972 horsepower and more than 1,250 lb-ft of torque from its all-electric powertrain.

Utilizing the world’s most energy-dense battery technology, created in partnership with the legendary Formula One team at Williams Advanced Engineering, the Evija features a unique center-mounted, vertically-stacked battery configuration to help with balance and evoke the feeling of driving a mid-engine race car. Additionally, optimized thermal dynamics allow for long power draws from the batteries without the performance loss often found in current electric vehicles. The Evija also offers impressive charging capabilities, with an 80% refill possible in under twelve minutes on a 350kW supercharger, along with aspirations for future supercharger options offering a full charge in less than nine minutes. 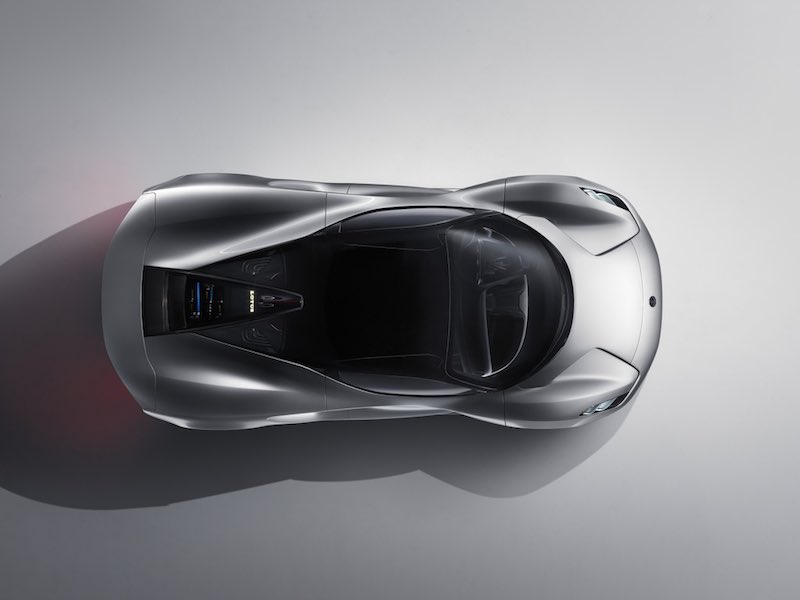 With a top speed in excess of 200mph and the ability to move from 0-186mph in under 9 seconds, the Evija requires a custom set of Pirelli Trofeo R tires. Magnesium wheels with center-lock lug nuts offer further weight reduction and provide a rigid foundation when moving at high speeds. Adaptive suspension with extra dampers helps optimize heave and pitch to maintain a stable ride during braking and acceleration.

The exterior of the Evija is absolutely breathtaking and aerodynamics are inherently a key design cue, with massive tunnels flowing on all sides of the vehicle. Intricate layers of carbon fiber throughout the front splitter help carve through the air and significantly reduce drag, while channels on each side of the hood direct air to the front tires and along the sides of the vehicle before reaching the intricately sculpted rear air ducts (equipped with hidden lighting to accent the design at night). The futuristic body design of the Evija does more than just turn heads, though. It also manages to perfectly streamline the air flow surrounding the vehicle for maximum drag reduction and optimized downforce. 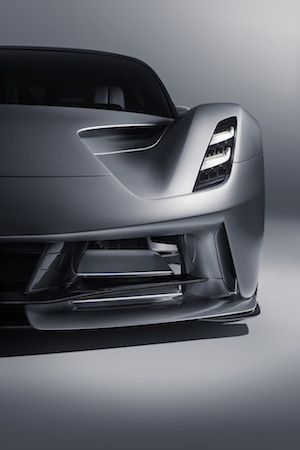 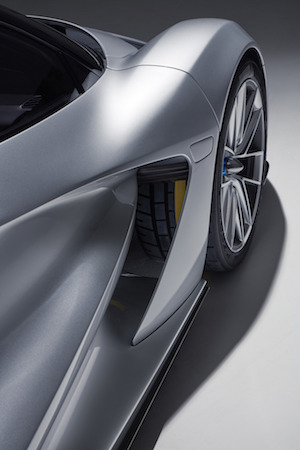 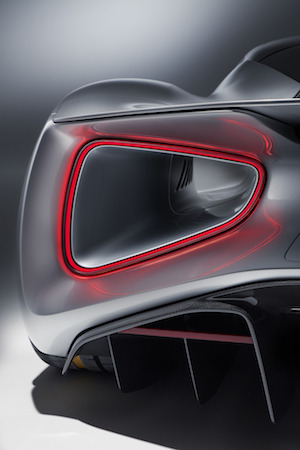 At the rear of the Evija, artistic tail lights are seamlessly integrated into the aerodynamics of the body and – in a clear nod to the aviation-inspired design, mimic a fighter jet’s afterburners. A massive rear diffuser incorporates a sleek fog light (similar to the rain light on a Formula car) and features my personal favorite element, DRS flaps accessed by a button on the steering wheel. The “T” on the rear Lotus badging serves as the vehicle’s reverse light, and a second hidden high-level brake light beneath the active rear wing keeps the car road-legal when the spoiler is fully deployed at speed. There is also a rear glass panel that reveals the cleverly placed battery layout where an engine would be found on a petrol-powered supercar.

The teardrop shaped cabin incorporates world-class ergonomics for perfect positioning and optimal driver performance and features a smorgasbord of modern technology. Video screens on each electronically-powered dihedral door panel replace traditional rearview mirrors and are linked to cleverly integrated pop-out cameras on each side and at the back of the model. A racing-style steering wheel and floating center cluster provide access to the vehicle’s controls, with a single-screen display delivering information about the Evija’s performance and programming. The hypercar offers five unique driving modes: Eco, City, Tour, Sport, and Track, while the beam-style dashboard uses an open-aired wishbone design to offer more cabin space and streamline the instrument panel. 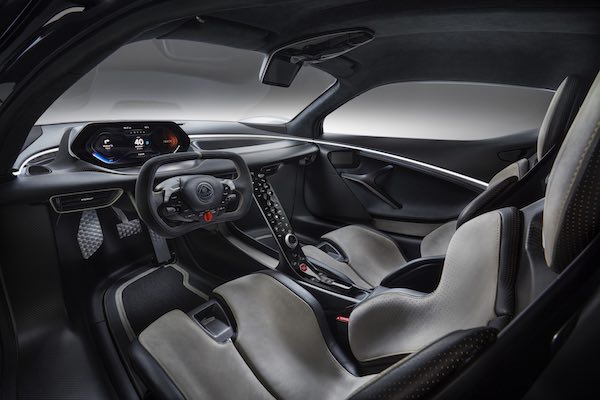 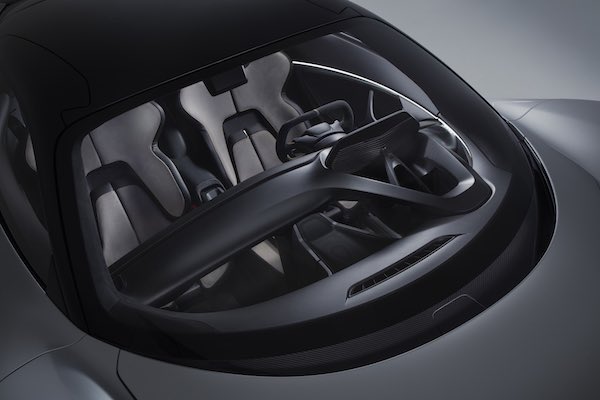 No more than 130 of the groundbreaking Lotus Evija will be produced at the company’s purpose-built Hethel facility in England’s Norfolk countryside. If your affinity for high speed hypercar performance has you craving the latest and greatest, Lotus is ready to meet the moment and reclaim pole position as the crème de la crème of electrified superiority. After all, this one is “For the Drivers.” (Click here to read our exclusive interview with Lotus Cars CEO, Phil Popham).