Camper & Nicholsons: Insider Secrets from the Biggest Name in Yachting 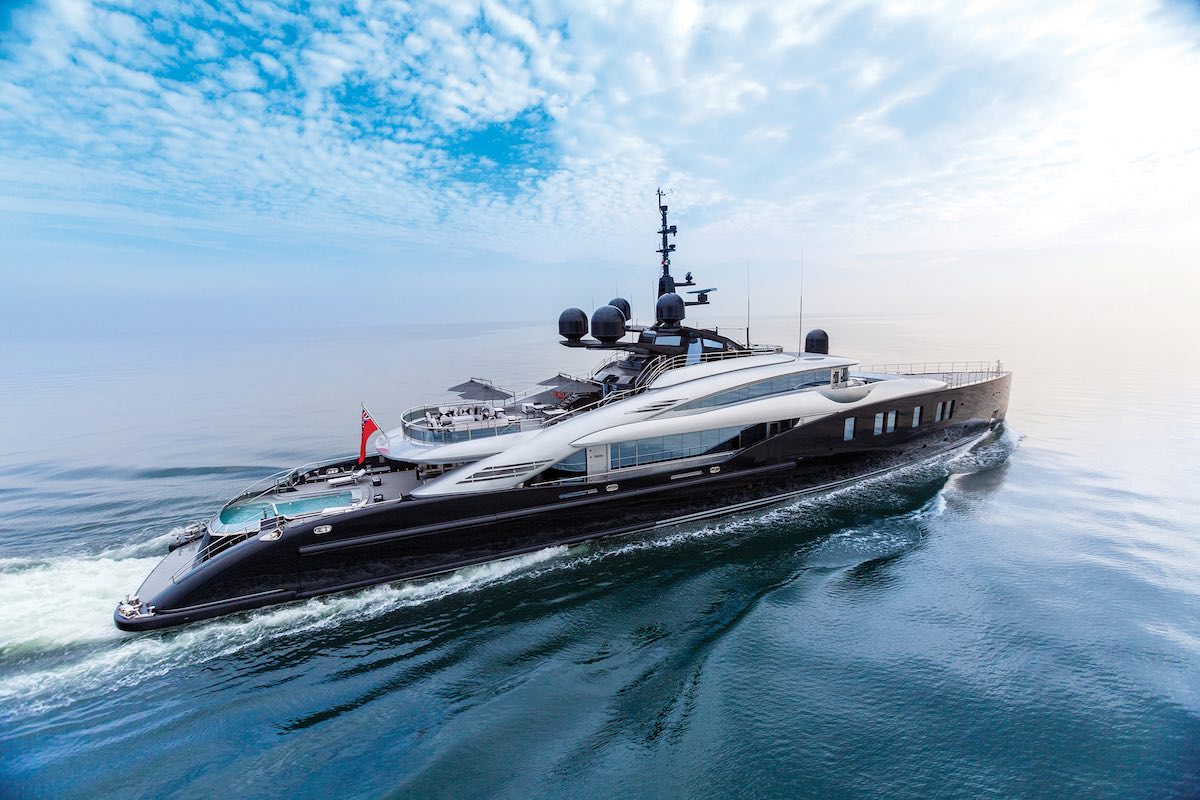 A brief warning: This story isn’t your typical yacht feature, describing how luxurious vessels are, or how professional a crew should be. At the upper echelon of yachting those aspects are a given.

Instead this story delivers insider advice from multiple yacht owners, top tier brokers, and serial charter guests. Don’t even think about purchasing or chartering one of the 2,017 40m-plus yachts in the world – including the 54 delivered in 2020 – without reading this first.

Why? Because in 2020 the luxury yacht market irrevocably changed. Not just because of Covid, although the pandemic accelerated innovations in safety and security. The biggest changes have been in yacht design, cruising autonomy, guest aspirations, toy manufacture, private aviation, and the new destinations demanded by clientele today. That insider knowledge has been distilled for you right here.

Take destinations first. This year a significant number of yachts have checked in from Scotland, Cuba, Finland, Mexico, and other locations that were barely considered by the luxury yacht industry five years ago. The simple fact is that experienced owners and long-time guests – some of whom have chartered twice per year for 20 years – desire a mix of the well-loved and the seldom-sailed.

Here are two examples. Many owners and guests wish to follow a tranquil week in the South of France with an action-packed cruise of northern Norway. Or spend the winter at leisure in British Virgin Islands, followed by an exploratory trip to Papua New Guinea. Added to the future location list are Belize (which has the world’s second longest barrier reef), Indonesia (which has 17,500 islands to explore), Palau (a scuba diving dreamscape), and Denmark (a land of endless beaches, hip bars, and Michelin stars). 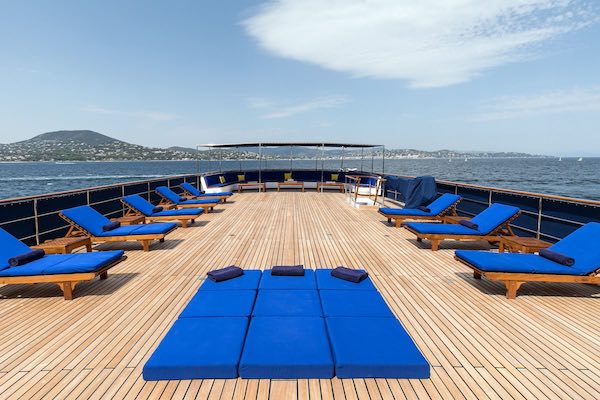 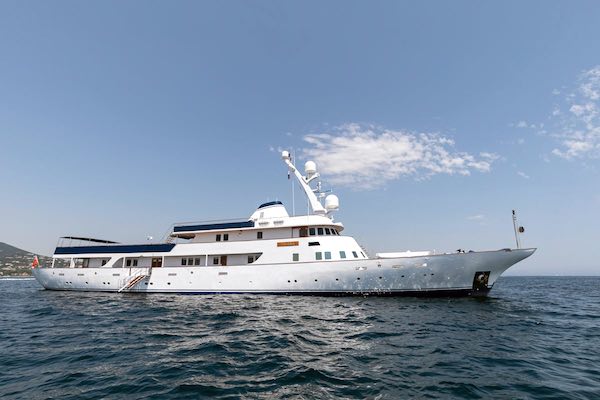 Paloma is one of the rare yachts for sale with global cruising capabilities. The classic 60m yacht was built in Japan in 1965 for the experienced owner of a Greek shipping line – as demanding a client as one can imagine in this industry. Fully rebuilt, she has crossed the Atlantic 20 times. She also boasts Trans-Pacific capability. This timeless charmer has wooden decks long enough to host a badminton tournament. And thanks to comprehensive refits in 2018 and 2020, her brand new communications systems allow Paloma to serve a mobile office anywhere in the world.

Destination choice had a knock-on effect on owners’ stay length. In 2020, several superyacht owners self-isolated for months on end. Particularly in the Caribbean, and most often near a small island with an airstrip, restaurant, and store. Last June, the South Pacific island of Fiji launched its Blue Lanes initiative, in which UHNW guests could jet in safely then quarantine aboard their luxury yacht. The attraction is obvious. Try Googling Fiji’s Lau Group. There are 60 islands to choose from: half are coral atolls with icing sugar sands; half are volcanic specks for hiking, snorkeling, and kayaking into lonely lagoons.

Guest stays also peaked in length. In the luxury charter industry the current sentiment is: If you’ve traveled safely this far, there’s a greater enticement to stay onboard. Formerly, charters from the most common Mediterranean and Caribbean embarkation points – namely Antibes, Porto Cervo, and Amalfi, plus St Barths, George Town, and Tortola – were typically one week long. Now 10 or 14 days is the norm. Especially when guests are embarking from a relatively new destination to explore seldom sailed areas. All interesting facts to note when purchasing a yacht for charter return. 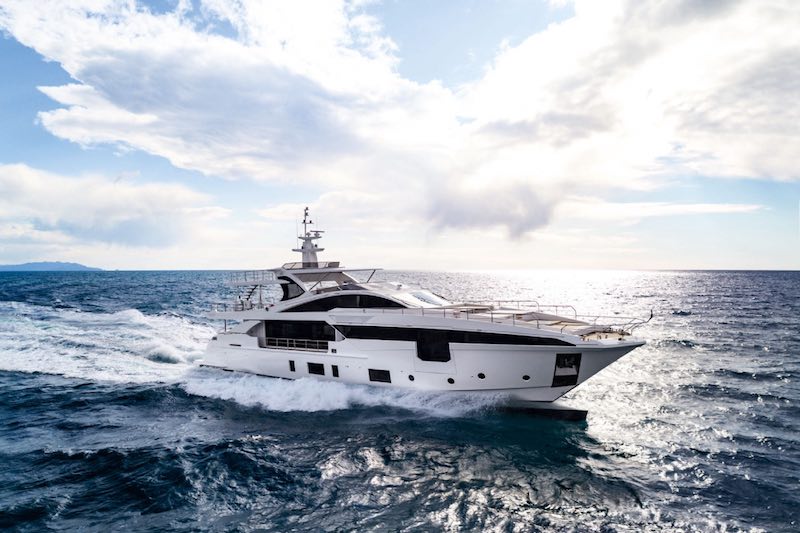 A fabulous charter option to purchase is Sol. The 35.5m Azimut, also for sale with Camper & Nicholsons, hits a sweet spot. Her carbon fibre hull allows her to craft five spacious cabins, sleeping 12 guests, within a package that can moor in almost any marina. With a top speed of 26 knots, she can also be first to the beach. A winner of ‘Best Custom Yacht’ and ‘Best Motor Yacht Over 30m’ awards, Sol launched in 2019 and is still under shipyard warranty.

The recent trend for exploration comes with a caveat: Charter guests want to venture into new areas – with the security that only a superyacht can provide. This has tended to direct repeat customers towards yachts they have chartered before. Several Camper & Nicholsons owners have declined to utilize their own yachts at all due to repeat demand; one owner attracts up to 90% regular custom and could have chartered his yacht four times over during a single season. The reasoning? A feeling that a new destination is best seen aboard a trusted asset that knows every anchorage, beach, and marina. Holidays of a lifetime need success to come guaranteed.

The 64.5m Benetti Silver Angel is a trusted asset that guests return to time and again. She is as comfortable in the Indian Ocean as she is in the Bay of Cannes. Indeed she has so much to offer that guests must make an effort to force themselves ashore. Read a large mosaic pool with resistance jets, a steam room, an on-board massage therapist, and an electronic golf machine that pops out a new ball every 1.5 seconds. Silver Angel comes highly recommended for divers. She has a Bauer compressor and 16 sets of scuba equipment – one for every guest plus four diving assistants. Plus 40 wetsuits to suit any conditions. 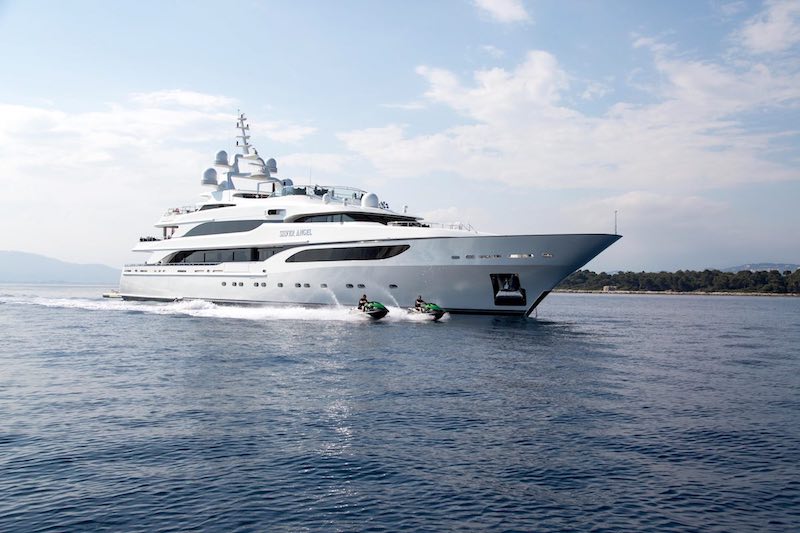 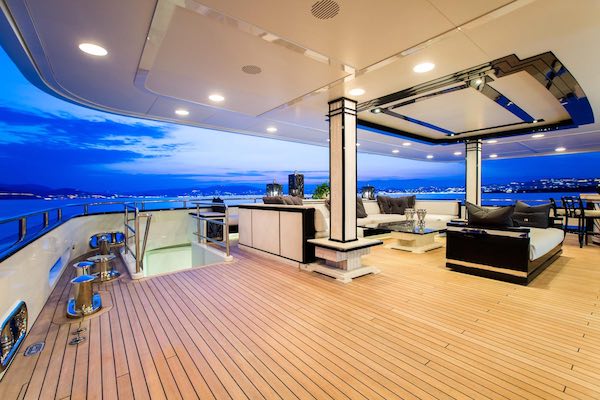 Increased demand for private aviation led VistaJet to partner with Camper & Nicholsons for their new VistaJet-to-Yacht service, which launched in late 2020. Now VistaJet offers seamless transportation to thousands of global airstrips that connect to Camper & Nicholsons portfolio of motor and sailing yachts. VistaJet’s eight sustainability pillars, which include using sustainable aviation fuel and removing 90% of single use cabin products, have helped sensitise the business model. 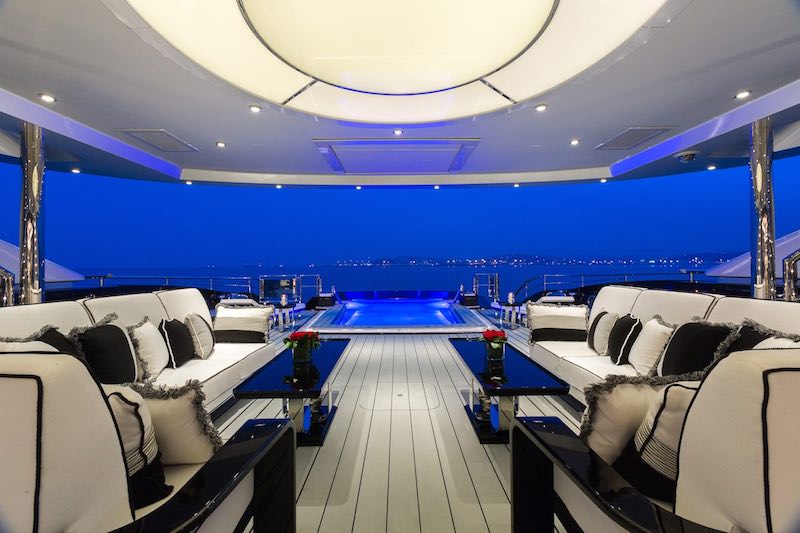 A particularly popular VistaJet-to-Yacht option has been Okto. The 66.5m leviathan cuts through the Mediterranean and Caribbean like a jet black blade. Her interiors were styled by Alberto Pinto, the same studio that redesigns Boeing 747s for private use. She has four tender bays. And an infinity pool measuring 6m x 4m with a contra-flow current for cardio exercise. Plus flyboards and hoverboards. But what really impresses guests is service, which is as individualized as anything found on a private jet. Recent guest experiences have included a private after-hours tour of the Vatican. Sure beats a walking tour of Monte-Carlo.

Toys have entered a new era of sophistication too. At the highest levels of yachting, a tender and a donut just don’t cut it. Popular purchases in 2020 included the Seabob F5 SR, which allows riders to fly under the waves like a 21st-century mermaid. This low-weight high-power Seabob is complemented by an integrated HD video camera – plus local storage and WiFi connectivity – allowing action to be live streamed onto any superyacht screen.

The most requested toy for 2021 has been electric hydrofoil surfboards, or eFoils. “The iPhone of Jetboards” lets users glide above the surface for 90 minutes at a time, all controlled by a waterproof panel that shows speed, battery power, and riding mode. In the words of former F1 champion Nico Rosberg: “It feels like you’re flying.” 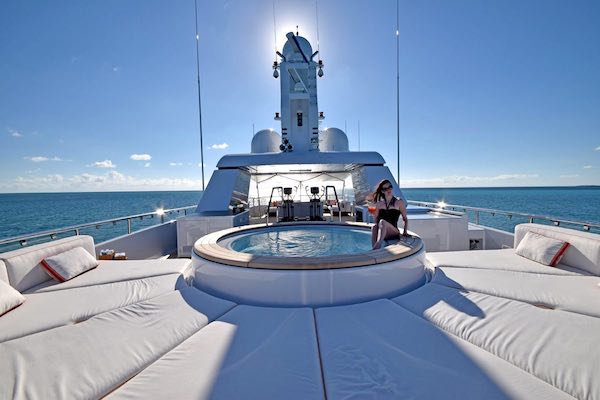 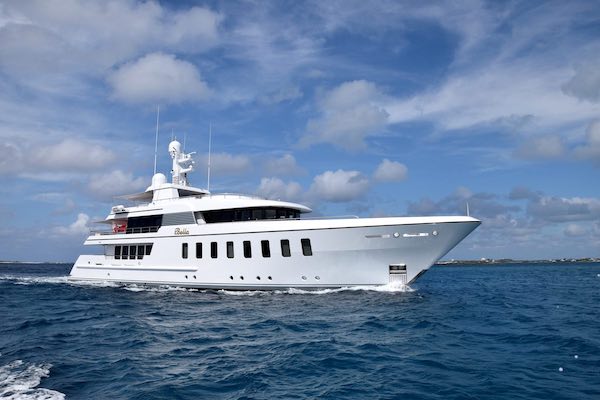 For an unrivalled flotilla of toys, charter Bella. The 45m Feadship brings the Caribbean alive with enough accoutrements to furnish a five-star island resort. Think hammocks, gazebos, banqueting tables, volleyball nets, cricket bats, a Weber barbeque, and 28 beach chairs. Bella is also in possession of Seabob F5s, an inflatable trampoline and gym, various towables, and a crew trained in jetski operation and safety. With six cabins welcoming 12 guests, she’s one of the most versatile yachts from the Virgin Islands to the Grenadines.

Technological advancements have shaped the newest yachts for sale with Camper & Nicholsons. Launched in 2018, RJX has an intelligent superstructure that incorporates floor-to-ceiling windows – which lift open to bring the ocean inside. Her sky lounge is topped by advanced solar panels. These energy hubs generate 4kw of electricity per day, making fuel consumption 30% lower than comparable yachts. Little wonder that RJX won the title of ‘Best Motor Yacht’ at 2019 World Superyacht Awards. 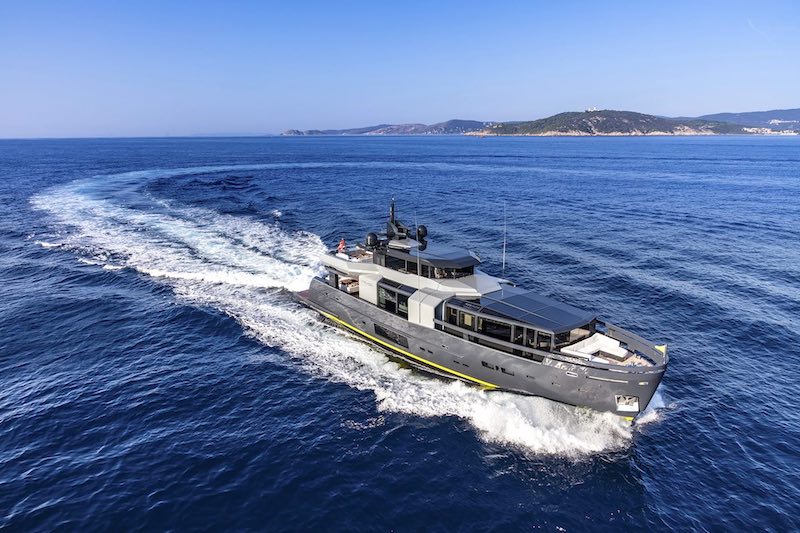 There’s a final factor than any charterer or buyer should consider. Yachts sit far longer at anchor than ever before – because they can. With stabilizers and dynamic positioning a vessel can act like a floating beach club, a spa, and a Michelin starred restaurant. Three services that are almost impossible to find all in one place.

In short, the luxury yacht has become a destination in itself.